Me and Sam Adams: A History Lesson

You have heard it said that our Constitution and our Founding Fathers are irrelevant to the modern age.  But if you've read my blog for any length of time, you know that I am obsessed with this time period in our nation's history.  I am in such awe of how this country came to be, and admire the men and women who stood up to a tyrant king and fought to establish something that had never existed before ... a country based on "the natural rights of man".  I hope to show you today that those sentiments are just as pertinent as they were nearly two and a half centuries ago.
Perhaps you are familiar with the fact that the Founding Fathers were fond of using the terms, "natural rights", "Laws of Nature" and "unalienable rights", but aren't really sure what they mean.  Let's start with "unalienable". It figures prominently in our Declaration of Independence: We hold these truths to be self-evident, that all men are created equal, that they are endowed by their Creator with certain unalienable Rights ...
I would venture to say that most Americans have a distorted idea of what "unalienable" means.  I would further conclude that they think it takes its meaning from the word "alien", signifying that these "unalienable" rights were unfamiliar or foreign to men of that time.  That is a wrong interpretation, and we actually mispronounce the word altogether.  In 1776, when the Declaration was written, this word was not pronounced as un-alien-able; the correct enunciation was un-a-lien-able, as in "a lien", a form of security interest granted over an item of property to secure the payment of a debt.  For instance, the bank holds a lien against your car, until the note is paid off.
So now you can see the true meaning of this most important phrase in one of our most important founding documents:  the natural rights that have been given to us by God are not subject to a lien by any king or ruler; they are ours to possess outright. 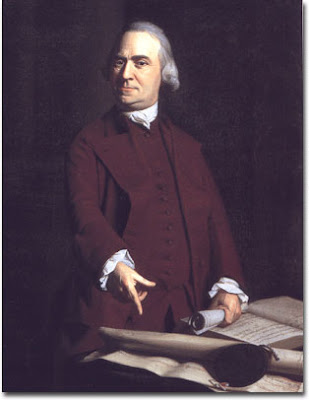 And just what are those "natural" rights?  We're all familiar with the language of the Declaration, which says "Life, Liberty and the Pursuit of Happiness".  But my favorite Founding Father, Sam Adams, expands on this idea and gives us a fuller picture of what our rights from God are.   In 1772, he wrote, "Among the natural rights of the colonists are these: first, a right to life; second, to liberty; third, to property; together with the right to support and defend them in the best manner they can. These are evident branches of ... the duty of self-preservation, commonly called the first law of nature. All men have a right to remain in a state of nature as long as they please; and in case of intolerable oppression, civil or religious, to leave the society they belong to, and enter into another.... Now what liberty can there be where property is taken away without consent?"
Can you see how far off track we have gotten?  CNN reports that one in six Americans receive some form of government assistance.  They have abandoned "the duty of self-preservation", and in doing so, no longer possess liberty to pursue their lives as they might dream.  In addition, they have become slaves of the State, their Life and their Happiness is at the whim of a benevolent Master.
It seems as if America is splitting in half ---- those who are content to receive what the government will hand out; and those who are desperate to live their lives as free men, unencumbered by the heavy hand of an oppressive authority.  I am reminded that it was so in 1776 America, as well.  Only one-third of the colonists believed strongly enough in the "radical" notion of these God-given rights to battle the despotic King George III.  The other two-thirds either could not see the value of living their lives unfettered and unchained, or believed wholeheartedly in the Nanny State and the inability of citizens to rule themselves.   They were content to receive whatever was handed out, or placated with money and power from the "system".  Either way, they were at odds with the fire of free will that burned in the hearts of men such as Sam Adams.
Mr. Adams was something of a firebrand, and was not afraid to confront his fellow countrymen over their subservient nature.  What he had to say to them in 1776 is just as relevant today.  Ponder his words:  "If ye love wealth better than liberty, [and] the tranquility of servitude [better] than the animated contest of freedom -- go home from us in peace. We ask not your counsels or arms. Crouch down and lick the hands which feed you. May your chains sit lightly upon you, and may posterity forget that you were our countrymen!"
We are at a time in our nation's history when you must choose your path.  Are you willing to crouch down to those that promise to feed you?  Or are you willing to stand for something more honorable and noble?  Will you depend on the iron fist for your crust of bread, or will you make your own loaf?  Sam Adams was among a unique corps of men who understood that the right to make of themselves what they wished could never be compromised.  It was a truth they understood as "self-evident".  And they were willing to sacrifice their very lives for it.  Are you?

Psalm 119:44-47    "I will always obey your law, for ever and ever.  I will walk about in freedom, for I have sought out your precepts.  I will speak of your statutes before kings and will not be put to shame, for I delight in your commands because I love them."