God Made A Farmer

I want to join the chorus of those applauding Chrysler and their Dodge Ram truck commercial during the Super Bowl.  Not only was it the single most respectable commercial aired, but it actually had something worthwhile to say.  It didn't follow the increasingly vulgar tone set by most ads, and its message was long overdue. 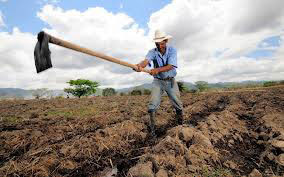 "God Made A Farmer", with a voiceover by the revered Paul Harvey, struck a harmonious chord across the prairies and plains of America.  If you couldn't smile at that ad and feel a sense of pride in our heritage, then we've probably lost you to the culture wars.
And if you are not aware of the plight of our farmers in this nation, then you've probably had your head buried in your iPad too long.  So I want to salute the Chrysler Corporation for taking the brave stand of supporting Future Farmers of America, and attempting to raise $1 million for the organization, along with other corporate sponsors Stihl, Bosch and Mossy Oak.
But there's another part of this story that you need to know and which we need to address.  We should extol the American farmer and encourage domestic agricultural growth.  But there is a wolf at the door and our food supply is in danger.  Because of the globalization of the world and the increasing influence of the UN across borders and boundaries, we, in the U.S., are expected to contribute towards alleviating the worldwide food crisis that is predicted for 2013.
According to an article from The Guardian, here's the problem:  our grain reserves are at an all-time historic low, due to the drought of 2012 and its continuation into this year.  So what effect will that have on our food production and world famine?
Lester Brown, president of the Earth Policy Centre in Washington, D.C., and one of the world's "leading environmentalists", says that extreme heat and drought in the U.S. will have consequences for the world's hungry.  "We are entering a new era of rising food prices and spreading hunger. Food supplies are tightening everywhere and land is becoming the most sought-after commodity as the world shifts from an age of food abundance to one of scarcity," says Brown. "The geopolitics of food is fast overshadowing the geopolitics of oil."  He warns that the global food supply system could collapse at any point, leaving hundreds of millions more people hungry, sparking widespread riots and bringing down governments.  According to Brown, the Middle East and Africa are especially vulnerable.  I'm guessing that the warm glow from the Dodge Ram commercial is waning about now.
But here's the caveat to this report:  it is supported by the Bill and Melinda Gates Foundation, known economic globalists, as well as climate theorists.  Furthermore, Gates believes one of the solutions to world hunger is through the genetic modification of foods, and he has invested not only in companies such as Monsanto, who have engineered genetically modified (GM) foods, but also invested in agriculture in Africa.  Whether true humanitarianism or something more dangerous is behind his interest and his money, you can guarantee that the world's agriculture will be affected.  These kinds of reports and the genetically modified food technology do not bode well for the American farmer OR the American consumer. 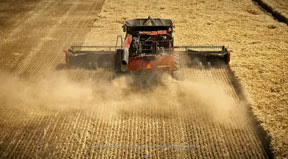 Neither does the sale of domestic farmland to institutional and foreign investors.  Farmland is an attractive "hedge" for investors looking to put their money into commodities that are safer than the stock market.  And countries such as China, with its exploding population and economy are eying the U.S. exports of corn, soybeans, and wheat.  And according to writer Steve Shenk, "the United States, like a short-sighted trust fund baby, is selling off their financial future along with their source of food for a quick grab of cash today."  Shenk goes on to report, "Foreign ownership of farmland is almost double what it was twenty years ago. In fact since 2004, foreign ownership of American soil has grown by almost thirty percent."  Kind of makes me a little nervous about who is protecting our domestic food supply!
There is no doubt that farming in America has changed.  My heritage, on both sides of the family, is farming, and I can remember when my paternal family farm was sold.  It was a sad day.  I have one cousin on my mother's side who is still hanging on.  It is in his blood and he will die a farmer.  But the future of Agriculture in America is going to change.  Will we still own "the amber waves of grain" that grace the fields of America?  And will it even resemble the grain that God created, or will it be a genetic mutant that has little similarity to its natural goodness?
There will be many who say this is a lot of fuss about nothing.  But are you willing to trust your food supply to the likes of Bill Gates or China?  Do you have plans if the price of food suddenly sky-rockets?  What about Heirloom seeds to grow your own food?  This is something to think about, people!  Drought and weather conditions are unpredictable, and so apparently is the world's food supply.  Don't take your "daily bread" for granted!

Genesis 1:29      Then God said, "I give you every seed-bearing plant on the face of the whole earth and every tree that has fruit with seed in it. They will be yours for food."