It struck me like a thunderbolt.  PLW and I were preparing our garden for Spring planting.  Our neighbor up the road was coming to remove the topsoil from last year's garden which we had unwittingly contaminated with chemically-treated mulch the year before.  (That doesn't make for a very productive yield and is one more lesson learned as we "return to the land").  Our plan was to plow a new garden and till the soil, producing the rich, dark dirt that we have previously enjoyed.
But first, we had to cut the clips and remove the cattle panel fence around the garden that kept the deer out; and then cut the chicken wire off the bottom of the panels that kept the rabbits out.  The T-posts on the ends of the garden were then dislodged and moved to the side. That would allow our neighbor to enter the garden with his front-end loader, remove the offending mulch, and then lower the disc to plow up new fertile soil.
PLW's first inclination was to discard the chicken wire.  His thinking was, "It is cheap enough, and a hassle to keep track of and store."  It was at that moment that I swear I channeled my grandmother.  "No!" my brain screamed.  "This chicken wire is still good," I said.  "We can re-use it."  PLW maintained that a new roll of chicken wire would be easier to stretch tight and clip to the fence; much less challenging than re-attaching the various-sized pieces that I had laid out on the yard.  "Besides, it's cheap", he reiterated, knowing that the financial aspect of his argument was usually enough to convince me to adopt his side.
But there it was .... another thought that rose to the forefront of my mind and would not be dismissed.  "But there might come a time when it's NOT cheap," I continued.  "Everything is costing more, and think about how valuable this could be if we needed it and couldn't afford the inflated price?"  With a barely hidden expression of exasperation, he gave up and agreed to keep the chicken wire; BUT ONLY if I laid all the pieces on top of each other and rolled it into one coil that could be stored easily.  This made sense and I was glad to compromise.  He didn't have to deal with a cumbersome amount of wire, and I could relax knowing we hadn't wasted a prospective tool for the future. 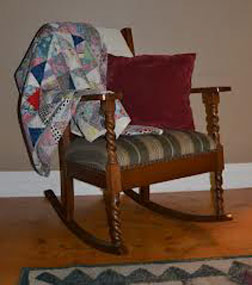 It was then that I understood my grandmother in a new and more personal way.  I could see why she made an effort to save slightly used aluminum foil and never threw away an old, faded dress.  (By the way, have you seen the price of aluminum foil lately?!?)  And those old dresses could be cut apart and made into quilts. Newspapers were saved and used to wash windows with vinegar and water. (That's back when homemakers actually washed their windows!)  String, rubber bands, and old cloth diapers were viewed as utilitarian items with future applications in mind.
My point is we are a "disposable society".  Yes, recycled plastic bottles and cans are in vogue, and I applaud this activity.  But, too many times, we are eager to throw away something after a single use.  It's easier, faster and more socially acceptable to "buy new".  My grandparents drove their cars until they wouldn't drive anymore.  How many of us trade ours off every two years for the latest model?  And that's nothing!  Do you really need the latest iPhone?  Or do you just discard the old version because everyone else has the new one, and you don't want to be out of step?  Our throwaway mentality needs to change!
I contend that as the currency wars continue, and the dollar experiences devaluation, we will see the price of commodities across the board rise to levels that will rock the world of average Americans.  The things that they discard and trivialize will become more valuable.
I now find myself eying items with a newfound appreciation.  I've even been known to wash out a Ziploc bag because it could be reused.  I no longer throw away or give away older shirts or jeans.  They are stored away for the time when I can't afford new clothes or can give them to someone who needs them more than I do.  I can't bring myself to throw away old pillows or blankets.  Mismatched dishes are also stored away.  What if we end up housing extra people who have fallen on hard times?  These are items that will be needed and useful.
Don't worry!  I haven't given in to a Mad Max vision of the world, but I have discovered an awareness of how precious everyday things could become if the SHTF.  I haven't become a hoarder, but I think twice before I throw something away.  Can I see a future use for me, PLW, or a fellow human being in need?  I set a limit on how much of any one thing we might need and then let the rest go, without feeling guilty.  But I now recognize the values of my grandmother; values that weren't "old-fashioned" or "behind the times".  She was smarter than I gave her credit for.  She already knew something that is becoming a surprising reality for my generation .... nothing is forever and nothing is guaranteed; scarcity and need can become our condition in a heartbeat.  The question is "Can we give up our voracious appetite for the latest and greatest?"  We will soon see.

Email ThisBlogThis!Share to TwitterShare to FacebookShare to Pinterest
Labels: Mindset, Our Culture.