TSA Out Of Bounds ... What Is REALLY Behind This?

I challenge anyone to watch the video of the precious three-year-old child being threatened with a pat-down by TSA agents and not become outraged.  You don't have to rely on media accounts or read someone else's interpretation of what happened.  It's all right there on the mother's cell phone video.
If you aren't aware of what happened, here's the short version:  Three-year-old Lucy has spina bifida and is in a wheelchair.  She and her family were flying through St. Louis Lambert Airport, on their way to Orlando and DisneyWorld, when they were detained and Lucy was pulled out of line.  Her mother was told the child would have to be patted down and her wheelchair "swabbed". 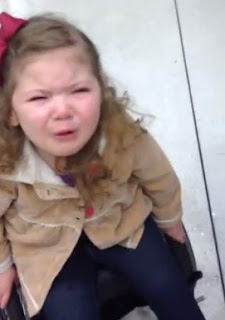 The quick-witted mom pulled out her cell phone and began recording.  You guessed it!  The TSA agent was none too pleased, and can be heard telling Mom that it was illegal to film the TSA.  The mother, very properly, explained that no one touched her child without her being able to film it.  You can hear Lucy's father challenging the agent, "Cite the law!"  Of course, there was no response.
There followed several minutes of back and forth with "managers" as I'm sure it became quickly apparent that this wasn't going to turn out good for the increasingly repressive agency.  One agent is even heard telling an outright lie.  How can there be any trust in these bullies?
I have to tell you that I don't think I could have kept my cool as well as Nathan and Annie, the parents of Lucy.   The need to take Lucy's stuffed animal, an obvious symbol of security, resulted in tears and anguished sobbing.  That would have done it for me!  And when you watch the video, there is no clear-cut reason given as to why this disabled child was singled out.
Which leads me down a disturbing path of thought.  What exactly are the motives behind the TSA's actions?  They seem to be pushing our buttons when it comes to our children and inappropriate touching.  There was another incident at DFW Airport in Dallas where a 12-year-old wheelchair-bound girl was pulled out of line for screening after allegedly testing positive for bomb residue.  The child, Shelbie, was obviously distraught while her mother was kept apart from her, and the screening was done in full view of the public.  The little girl was on her way to Florida for medical treatment for brittle bone disease, and had made the trip many times before with no similar occurrences.  A bomb squad was brought in, and after nearly an hour of detention, mother and child were released with no explanation.
The TSA has a history of such baffling and unexplained screenings when it comes to our children.  Two years ago, the 17-year-old niece of Texas Congressman Ralph Hall was pulled out of line for additional screening while accompanying her Christian youth group on a trip to Australia.  In an article on The Blaze, it is reported that the girl was submitted to a public screening, whereby her  “loose-fitting strapless sundress” slipped down to her stomach during the pat-down by a female officer, “revealing her breasts.”  One has to ask, "Why this group?" and "Why only this one girl?" 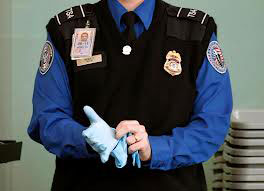 In each of these incidents, after being exposed for their inappropriate and inflexible behavior, the TSA has offered a public apology; in the case of Lucy, they chalk it up to "inaccurate guidance".  When it came to Shelbie's experience, the TSA released a written statement in which they assured the public that it takes security seriously and encouraging “feedback” from passengers who are “not satisfied with their screening experience.”  As for the embarrassed and humiliated young lady?  TSA's excuse was that it was simply "an accident -- due to the loose-fitting, full-length strapless dress."
So, again, I ask, "What is the motive?"  Is it just the actions of a poorly run and trained, as well as insensitive bureaucratic agency?  Could it be that they are just trying to desensitize us to the un-Constitutional procedures, so that we will eventually accept them as the norm? Or is it something more sinister?  Is it a carefully designed plan to push the American public towards acting on our outrage at these ridiculous and unmerited assaults on our personal liberties?  If they can get one parent or passenger to lose their cool and react out of anger and injustice, then what a perfect excuse to clamp down even harder.  And how better to push our buttons than through enacting indignities upon the helpless -- and children, no less?
Their actions just make no sense!  Bomb residue on a handicapped child?  Are they for real?!?  I hate that I am always suspicious of government measures.  The TSA refuses to profile obvious suspects  that are a danger to the public's safety, yet they seem to be doing just that to our most innocent.  We must ask ourselves why.  In the meantime, I applaud the American public for being vigilant and exposing these outrageous pushes against our private freedoms.  Publicizing the scurrilous invasions of privacy seems to be their only deterrent.  Keep filming!

Job 17:8-9    "The upright are appalled at this; the innocent are aroused against the ungodly. Nevertheless, the righteous will hold to their ways, and those with clean hands will grow stronger."