Home Schoolers: Threat On The Horizon

This is the story of Uwe and Hannelore Romeike and their five children.  The Romeike's were the first family to ever be granted asylum in the U.S. for the protection of their homeschooling rights.  Both parents were music teachers in their native Germany, as well as devout Evangelical Christians.  Like many parents in this country, Uwe and Hannelore became concerned that education in Germany's public school system was not consistent with the teachings of their Christian faith.  It's not that they demanded the Bible become part of the curriculum, but they sensed that their children were not receiving the moral instruction and lessons in integrity, virtue and righteous principles that a more faith-based program of study might provide.
According to a Washington Times article, they withdrew their children from German public schools in 2006, and their objection to the educational system in Germany resulted in close to $10,000 in fines.  It also prompted visits by police and the forced removal of their children from the family home.  It is hard to fathom that this took place just a few short years ago.  It reeks of totalitarian conduct, reminiscent of Stalin or Hitler's Youth program!  So the Romeikes fled their native land and sought refuge; where else but the United States of America? 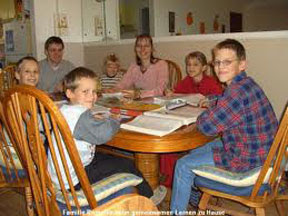 In January of 2010, Memphis federal immigration judge Lawrence Burman granted them political asylum, on the basis that they feared persecution for their beliefs if they returned to Germany.  They were assisted in their case by the Homeschool Legal Defense Association (HSLDA), which believed in their cause and their right to raise their children as they saw fit.  But the victory was short-lived.
The United States government, under the auspices of Attorney General Eric Holder is trying to revoke their asylum and force them to return to Germany.  And this is where the case could have long-reaching effects on American home-schoolers.  According to the brief filed in Romeike v. Holder, the Attorney General puts forth the heinous argument that "parents have no fundamental right to home-educate their children."  What?!?  Exactly how does he come up with this ridiculous and despicable rationalization?
Well according to HSLDA founder Mike Farris, AG Holder's argument rests on this premise:  a nation violates no one's rights if it bans homeschooling entirely.  Farris further explains this egregious hypothesis: There are two major portions of constitutional rights of citizens – fundamental liberties and equal protection. The U.S. Attorney General has said this about homeschooling. There is no fundamental liberty to homeschool. So long as a government bans homeschooling broadly and equally, there is no violation of your rights.” (Read the HSLDA position on this case here.)
Got that?  All the government has to do is ban an activity, and as long as they haven't singled out any individual, but banned the activity across the board, your individual rights have not been denied.  The essence of Holder's argument against the Romeike's was that they failed to show that there was any discrimination based on religion; the Romeikes did not prove that all homeschoolers were religious, so therefore not all Christians believed they had to homeschool.  Their claim that their religious freedom was denied did not apply to the group of home-schoolers as a whole, therefore their individual claim was not valid.  Can you believe that?
The Romeike's case is currently before the United States Court of Appeals for the Sixth Circuit, and should AG Holder lose, I have no doubt that this case will go all the way to the Supreme Court.  And let's not fool ourselves!  This case has ramifications far beyond this innocent family who just wants to educate their children as they see fit.  It even goes beyond the rights of American home-schoolers.  This case is about the fundamental misunderstanding by our Government that religious freedom is an individual right.  You cannot legislate it away by declaring that a whole group must all follow a standard.  And if this case is not upheld in favor of the Romeikes, you can rest assured that it will be used to assault the cause of liberty, both individual and religious, for all Americans.  Follow this case closely!