The Deliberate Editing of the Bible

I have made no secret of my love of studying the Bible; in fact, there are days when I wish that's all I had to do.  Those are the days that I feel the veil of understanding has been lifted just a little higher than ever before, and I have a hunger to keep learning more.  And then comes the immediate thought, "The way things are going, I can easily conceive of a time when my days will be wholly spent either in my garden, or in the Word."  While those activities would be entirely agreeable with me, it would mean that the world as we know it has declined to an unrecognizable state.  So, in the meantime, I will enjoy the minutes per day that I'm able to set apart from my other worldly duties and enjoy the benefits of gaining sound knowledge.
So you can imagine my shock when I was searching through some commentaries to further understand a particular passage and I stumbled upon a list of verses that have been conspicuously altered from their original versions.  I am not talking about changing "Thee" and "Thou" to more modern language.  And I'm not even complaining about the misuse of Greek translations replacing the Hebrew meaning of words, which can oftentimes change the original message of Scripture.  I am talking about the intentional and calculated effort to diminish the significance of Jesus and God's plan to redeem mankind.  Think I'm being oversensitive?  Let me show you just a few verses:

Matthew 9:13 (NKJV - New King James Version):   But go and learn what this means: ‘I desire mercy and not sacrifice.’ For I did not come to call the righteous, but sinners, to repentance."

Matthew 9:13 (NIV - New International Version):  But go and learn what this means: ‘I desire mercy, not sacrifice.’ For I have not come to call the righteous, but sinners.” 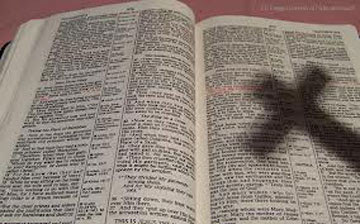 See the subtle difference?  Yet it is enormously important to understanding Jesus's message to Believers.  You can say, "But it's correct that his primary calling was to sinners, not those who already belonged to God" ...  and you would be right.  But when you leave out what he called them TO, then that's an important piece of the puzzle and a bit of information that is important to their salvation.  He calls them to a specific action (repentance) and I contend that the Modern Church, just like the newer translations, have failed to point out that fact.  By neglecting to teach us that it's not enough to simply accept Christ; that we must also repent of our sins, it is taking us only half-way to our goal.  Repentance is desired and demanded by God, and it includes acknowledging our sins and asking for forgiveness.  How much deeper is our commitment and relationship to Him when we've taken that extra step?
What's the big deal, you ask?  Well, I challenge you to find any modern version other than the various King James versions (including the older Authorized version, the new KJV, and the 21st Century KJV) that include those last two words of the verse.  The only other one that included the repentance clause was the 1599 Geneva Bible, which I also own.  It was the Bible used by our Founding Fathers.  It made me wonder if there were any more verses whose meanings were changed by the addition or subtraction of phrases. Take a look at these:

Acts 8:37 (NKJV):  Then Philip said, “If you believe with all your heart, you may.” And he answered and said, “I believe that Jesus Christ is the Son of God.”

In these instances, you will be lucky if you find these verses.  Most modern versions omit them entirely, or at the very least, they forecast doubt on the verses by noting in the footnotes that earlier editions of the Bible omitted the verses.  So what does it accomplish to omit these verses?  To me, it seems quite clear that the omission of these verses accomplishes the following:  1) In the first instance, it removes the purpose of why Jesus became flesh and came to earth --- to offer salvation to the lost, and   2)  In the second, this removed Scripture omits the deity of Jesus.
It comes at the end of an account of the Apostle Paul preaching to a eunuch (a wise counselor to the queen of Ethiopia).  Philip finds the eunuch reading Isaiah, but he professes that he doesn't understand the prophecy.  So Philip teaches him that Isaiah is speaking about Jesus, who will become the Savior of the world.  In doing so, Philip would have explained how Jesus could become one's Savior, and about the symbolism of baptism.  So the eunuch asks Philip in the preceding verse, "What hinders me from becoming baptized?"  And Philip answers him, "If you believe with all your heart, you can be baptized."  In effect, if you believe that Jesus is who He said He was, and who I and the prophets have proclaimed him to be, and believe it with all your heart, then you can be baptized in His name.  And the eunuch replies, "I believe that Jesus Christ is the Son of God."
Do you see what can be accomplished by omitting these verses?  It lessens the impact of the Gospel message and, as far as I am concerned, it distorts it.  When you take away the central message of salvation through Jesus Christ and omit the necessity of declaring Jesus as the Son of God, then you are no different than the Pharisees that mocked and denied Him.
And if you need further proof, check out and compare these devious changes:
John 6:47 -  Most assuredly, I say to you, he who believes in Me has everlasting life. (omitted)
John 10:30 -  I and My Father are one.”  (My Father is changed to The Father).
Colossians 1:14 - in whom we have redemption through His blood, the forgiveness of sins. (omitted).
1 Timothy 3:16 - .... God was manifested in the flesh.  This verse was changed to He appeared in a body (or in the flesh).
Let's see, in these four short verses, the translations manage to 1) deny that belief is in Jesus Christ alone; not any or all gods  2)  deny the identity of Jesus as the Son of God,  3) deny that the forgiveness of my sins comes through the death of Christ on the Cross; that He died for my sins and shed His blood for me, and 4) imply that Jesus was just a man by the refusal to call Him God.  Can you see how clever Satan worked this deception?  Just change a word here or there; leave out any reference to the deity of Christ; allow for the possibility that there are other ways to believe and be saved; and introduce the possibility that Jesus was just a man, and perhaps didn't even know that He was God (I actually had that posited to me in a Sunday School class!)  Can you see how easy it would be to open the door, not only to apostasy, but to a perversion of God's Holy Word?
These are just a few of the verses that astounded me, and I invite you to take a look at the others.  I am not advocating the use of the original King James Bible only, as the website mentions, because  I found the updated versions of all the King James Bibles to hold true to the original manuscript.  It is the newer modern versions that are now suspect in my eyes.  I have even read some of the latest translations which change the virgin Mary to the young woman.  I think you will agree that denies the hand of God in the conception of our Lord and further diminishes his Deity.
I just want you to be aware of the attempt to water down the Gospel and the machinations of Satan and Man to pervert our faith.  We must be on guard and protect the Holy Word!  As we face dark days, we need to know the true meaning of Scripture and the accurate rendering of God's Word.  It will be what sustains our soul and keeps us from falling away from our faith!

2 Timothy 2:15    "Do your best to present yourself to God as one approved, a worker who does not need to be ashamed and who correctly handles the word of truth."