Boy Scouts of America: Caught Between Money and Morality

I've wanted to comment on this controversy for some time now, but wanted to make sure that I had fully developed my viewpoint before exposing it to you readers.  By now, you're all aware that the Boy Scouts of America have been heavily pressured to abandon their "No Gays" policy.  I believe that this is more than just a question of allowing homosexual scout leaders the opportunity to be a part of the organization.  This should not be seen as simply a "social justice" issue.  The history, intent and purpose of the BSA should be taken into account and honored.  Policies should not be changed through force of threats. 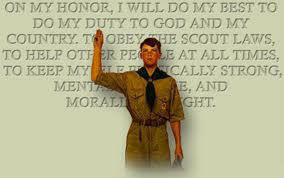 According to the research I did, the stated purpose of the BSA at its incorporation in 1910 was "to teach [boys] patriotism, courage, self-reliance, and kindred values."  Later, in 1937, the mission of the Scouts was defined as follows:  "Each generation, as it comes to maturity, has no more important duty than that of teaching high ideals and proper behavior to the generation which follows."  The current mission statement of the BSA is "to prepare young people to make ethical and moral choices over their lifetimes by instilling in them the values of the Scout Oath and Law."  There was a time when both stood for something.  Just so we're clear, here are the Scout Oath and the Scout Law:


The Scout Oath
On my honour I promise that I will do my best—
To do my duty to God and my Country
To help other people at all times and
To obey the Scout Law.

I'm going to go out on a limb here, but I would be willing to suggest that the radical proponents of the Gay and Lesbian movement view the BSA organization as "exclusive", just as they see the institution of marriage.  They will never be content until they defeat all traditional, God-centered social groups and redefine the meaning of "moral".  I'm pretty sure, just as in the state of marriage, their focus is not on what best serves the children, but what best advances their agenda.
Before we go any further, I want to state that I categorically believe that a Gay man could teach a boy patriotism, courage and self-reliance.  He could emulate trustworthiness, loyalty, friendliness, courtesy, kindness, obedience, cheerfulness, etc.  But part of the Scout's Oath is to do his duty to God; and the Scout Law calls for reverence, which by its' very definition, calls for a deep respect for something.  I believe that "something" is the morals and principles that God calls every human being to display.  Those morals do not morph and evolve over time, no matter what the changing culture proposes. 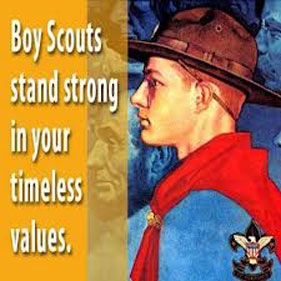 It is exactly because of the Biblical morals and values that the Boy Scouts have exemplified for over 100 years, that they have received major backing and funding from churches and religious organizations.  But now that faction has come in direct conflict with corporate sponsors such as Bank of America, GE and Monsanto.  Intel, pharmaceutical giant Merck, the United Way, and UPS all cut their funding in 2012 because of this issue.  If BSA continues with their "No Gay" policy, then they will discontinue their funding.
What is sad to me is that it now appears that BSA is considering changing their policy, just seven months after reaffirming that it "remains in the best interest of Scouting" to keep its 102-year-old membership policy intact.  Furthermore, a 2000 Supreme Court decision ruled that the group had the constitutional right to "freedom of association" – allowing it and other groups to exclude persons from membership when "the presence of that person affects in a significant way the group's ability to advocate public or private viewpoints."
And what has been at the core of the Boy Scout viewpoint?  It's very simple .... the word of God.  There is no denying the fact that everywhere homosexual activity is mentioned in Scripture, it is disapproved and counted as sin..... (And I want to make sure you understand; it is mentioned amidst a myriad of sins, all of them equal in their condemnation by God, and many of which I am guilty).  But the bottom line is this:  a sin is a sin, and we are all called to repent and no longer follow our sinful nature.
So what has changed?  Is it as simple as that age-old axiom, "follow the money?"  If so, then the leadership at the top has failed the very essence of what it means to be a Boy Scout.  And if they caved to public pressure (including the President), then what does that teach the millions of Scouts under their influence?  Perhaps they should remove "Brave" from the tenets of their Scout law.
If the BSA Council thinks that pushing this controversy off to the local Scout troops will solve the problem, then they are delusional.  According to the BSA national spokesman, the new policy "would allow the religious, civic, or educational organizations that oversee and deliver Scouting to determine how to address the issue."  By backing down from their original stance, the Scouts will only embolden the LGBT, and they will not stop until they have changed the policy at the national level.
If this was just a case of differences in sexual orientation and preference, then I could possibly understand some level of cooperation.  But there is more at stake.  Not only is the moral foundation of our culture under attack, but the safety of our children is at risk.  According to my research, several reports have surfaced over the years regarding incidents of sexual abuse within the Boy Scouts that include incidents of repeat offenders.  There have also been several high profile court cases that resulted in convictions and settlements involving such incidents.  On October 19, 2012, the Boy Scouts of America were forced by court order to release over 20,000 pages of documentation on 1200 alleged child sexual abuse cases within the organization from between 1965 and 1985.  This is as ugly and inexcusable as the pedophilia hidden by the Catholic Church!
The conscience of our culture is focused on the deaths of school children at the hands of maniacs with guns.  Why aren't they equally concerned about the danger and damage done to children from sexual abuse?  Our President presumes to represent the moral outrage of the nation when he says, "No law or set of laws can keep our children completely safe. But if there's even one thing we can do, if there's just one life we can save, we've got an obligation to try."  Should not the same moral indignation be applied to the sexual abuse of young boys?  There were 1200 alleged cases during the 20 years between 1965 and 1985, when homosexuality was still considered socially unacceptable.  How many more do you think have occurred in the ensuing 27 years of our moral decline?  And how many more will take place in the future if the radical homosexual agenda is pushed ever more mainstream?
Did you know that Gay activists like the Human Rights Campaign and the Southern Poverty Law Center are introducing heterophobic legislation initiated by the Gay lobby, which would prevent children molested by homosexuals from seeking heterosexual counseling?  The Gay lobbyists demand equality, yet wish to deny children access to full mental health care.  You can read the opinion of a gay Scout master and get his full story here.
The bottom line is this .... Do the Boy Scouts of America still stand for their original principles?  Or have they sold out for corporate donations and given in to the moral decay of our culture?  Either way, the proud tradition has been tarnished.

Luke 16:13     “No one can serve two masters. Either you will hate the one and love the other, or you will be devoted to the one and despise the other. You cannot serve both God and money.”

Email ThisBlogThis!Share to TwitterShare to FacebookShare to Pinterest
Labels: Our Culture., Our Youth, Social Commentary, Values