Women In Combat: My Opinion

I'm sure I'm going to be excoriated over this post, but I'm just going to come out swinging on this one!  The idea of women on the front lines of combat is not only illogical, it is dangerous.  I've had a front row seat to the whole gender equality battle over the last few decades, and I am not shy about saying that it has not served my gender or our society well. 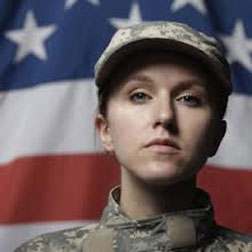 Before you think that I am denigrating the skills and intelligence of women, I unequivocally deny that charge.  Women are more than capable of running businesses as CEOs, and deserve equal pay for equal jobs.  I have a profound pride in seeing women astronauts, women Supreme Court judges, and yes, even women serving in our military.  Our minds are as capable of strategic planning as any man's, and I would even venture that our attention to detail and ability to multi-task are oftentimes superior to a man's.
But let's be honest, we are not physically equal.  We never have been and never will be.  That is a fact and one that was designed by our Maker.  I believe that God deliberately and intentionally created man and woman for different purposes.  He shaped our bodies for specific and separate tasks and developed our emotions to be distinct and dissimilar .... on purpose!  You see we each have individual roles that uniquely support His plan for proliferation.
We can all agree that women's bodies are designed to give and support life, while men are engineered, both physically and psychologically, to protect the female species.  Women view circumstances and events through an emotional lens, while men approach situations through reason and just want to "fix" everything.
I suppose the feminist movement had its roots in the restlessness of the 60s and 70s, when women thought "the grass was greener" in the corporate world.  Perhaps they were tired of dirty diapers, endless loads of laundry, and an inability to share in their husband's day.  Or maybe they listened to the lies of the propagandists who told them that being "a housewife" was an unimportant and menial position.  So they turned the raising of their children over to substitute mothers; hired people to clean their homes; abandoned their natural state of nurturing for a harsher, competitive edge; and denied their womanly, delicate and gentle qualities.  Women no longer celebrated their softer side.  Little girls grew up wanting to be baseball players, race car drivers and, yes, soldiers.
In the meantime, our society and the structure of our families fell apart.  Divorce rates skyrocketed; both men and women engaged in affairs because the carrot was dangled before them in greater numbers at work.  I know it sounds draconian and old-fashioned, but I am convinced that it is the innate makeup of men to be the defender and protector; to guard and shield his mate from harm and injury.  Men still want to be the knight in shining armor, and I think if most women were honest with themselves, they long to be safeguarded and secure; to know that they have a champion defending their honor and their physical safety.  Who doesn't want to feel cherished? 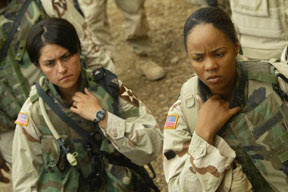 That brings me back to the battlefield.  I must agree with Executive Director of the Chaplain Alliance for Religious Liberty, Ron Crews, who believes that this is not a matter of courage, desire or ability.  He was quoted in a recent Christian Post online article: "God created inside of man the honor to protect the women around them.  Men in combat will have that innately inside of them. This will cause a distraction in combat."  Then there is the obvious question of physical strength and ability.  Will the average woman ground combat soldier be able to carry an injured male comrade-in-arms to safety?  And if you have any question about her capabilities to perform that duty, how many of our fathers, brothers and sons are we willing to sacrifice to give her that opportunity?
And can anyone besides me picture the testosterone that will be on display when you have a company of alpha males, (who just happen to be in warrior mode on the front lines), competing to be not only the dominant protector of their soldier sister, but the conqueror?  And don't tell me that their professionalism will take precedence over their hormones.  History is full of armies that have been compromised by the female influence.
Lastly, is anyone considering who we are fighting in far-off lands?  Does anyone in the military hierarchy really think that a woman combat soldier is going to be treated with any degree of respect, should she be captured by the enemy?  The Middle East hasn't exactly been the poster child in the human rights department -- especially for women!
I am all for women in the military, and in key administrative positions.  But due to their physical limitations, the potential for sexual tension, and their predisposition for nurturing, they just do not possess a "warrior mentality".   Therefore, I think it is inappropriate to push women in the military beyond the current boundaries.  And if this becomes policy, what's next?  Are you ready to sign up your 18-year-old daughter for the draft?  Don't laugh.  Look around you.  Everything is upside down and spinning out of control.

Hosea 14:9     "Who is wise? Let them realize these things. Who is discerning? Let them understand. The ways of the Lord are right; the righteous walk in them, but the rebellious stumble in them."
Posted by Pam Kohler at 7:00 AM