We Must Rise Above It All

As I made another circle around the perimeter of our property, my morning walk took on a feeling as somber and dreary as the gray winter sky.  The New Year is supposed to enthuse us with thoughts of new beginnings and fresh starts.  Instead, as I talked to God while I trekked over the hard, cold ground, all I could see was a future that screamed of more loss and a downward spiral into more taxes, regulations and promises of less freedom.  My spirit matched the dull and dismal landscape, and I searched for any sign of hope.
I had not been surprised at the failings of our Congressional leaders.  I knew that whatever "deal" they came up with for avoiding the Fiscal Cliff would not solve our problems.  For every $1 their Bill raises in revenue, they propose to spend $41.  And the Senate received the Bill three minutes before they voted on it.  What a joke!  This is just one more nail in the coffin of "the America we used to be."
But I'm not willing to accept our early demise, nor will I give in easily to these momentary lapses towards despondency.  That's not who I am!  Because in spite of all that I see happening around me and in the Halls of Congress, I know that my destiny is to fight for something bigger and more consequential than any man-made law or policy.  While I am a citizen of the greatest country that has ever existed on this planet, I owe my allegiance to the One who brought this country into existence, and for whom it has been dedicated from its very foundation. 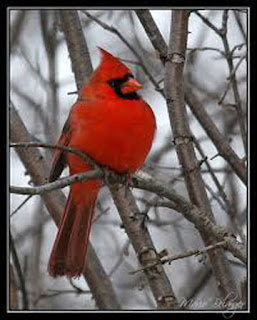 So, I refused to give in to the bleakness of my thoughts or the gloom of the overcast day.  And just as I decided to concentrate on trusting in my Lord's plan, instead of leaning on my own understanding and perceptions of current events, I looked ahead a few yards and there sat the most beautiful Cardinal; a brilliant splash of color against the dull grays, browns and ashen palette of winter.
I laughed out loud.  "Thank you, God!"  I knew He was showing me that nothing is ever as dark and desolate as we project.  So I decided that I would spend this day seeking stories that promised hope.  I didn't listen to one word of the endless commentaries on the Fiscal Cliff negotiations.  What difference would it make?   As an individual, I can have no influence in this matter, nor change the outcome.  My God knows my circumstances, and I will rely on Him to provide.
Today will be the day that I turn away from worrying about the domestic Debt Crisis, the attacks on our Constitutional rights, or the erosion of our national sovereignty.  Instead, I will rejoice in the news that a dear friend of ours has made the decision to be baptized.  She has earnestly and longingly sought the spiritual knowledge that resulted in asking Jesus into her heart and to reign as her Savior.  I will delight in her hunger for that relationship, as she learns to rely on Him instead of the world.
I will also celebrate the news that 60,000 college-age students are gathering this week in Atlanta for an event called Passion 2013.   The purpose of this conference is to encourage young people to make Jesus the focus of their life's goal; to make Him known in their generation.  Considering that the vast majority of the approximately 20 million college students don't have a clue as to why they are on this planet, I applaud this effort to embolden our youth in their faith.  The cornerstone of this conference is God's ability to accomplish "immeasurably above" one's highest expectations.
Because let's face it; our expectations for the future of this country, let alone the world, are not too high.  I see moral decay, corruption, bondage to all kinds of sins, lack of leadership, persecution and threats of civil unrest and tyranny.  But I know in my soul that our God wants to give us more than we can ever imagine in all areas of our lives .... more provision, more peace, better health, increased faith, and greater courage.  All we have to do is believe Him and claim it!
So, instead of mourning the setbacks and giving in to the fears, I have decided that I will delight in the signs He gives me; the tokens of His presence, whether it be a new and unexpected revelation during my daily Bible study; a much needed word of encouragement at the moment I need it; that unexplained but tangible stirring of my soul as the Holy Spirit convicts me through a song, a photo, a spoken word ..... or the simple sighting of a spectacular redbird in the middle of winter.  Any, or all of it, shows me that there is always hope and that He can accomplish more than I can ever imagine.  My future lies in His promise!

Ephesians 3:20-21    "Now to Him who is able to do immeasurably more than all we ask or imagine, according to His power that is at work within us, to Him be glory in the church and in Christ Jesus throughout all generations, for ever and ever! Amen."
Posted by Pam Kohler at 7:00 AM