Forty years ago, on January 22, 1973, the Supreme Court made a devastating decision that set this country on an immoral slide towards hell.  Coupled with the 1963 landmark decision that outlawed the Bible in public schools, the case of Roe v. Wade further encouraged millions of Americans to spit in the eye of God Almighty.  And this wasn't the only case before the highest court in the land.  There was another one; the less well-known case of Doe v. Bolton, which overturned the abortion law in Georgia.  Together, Doe and Roe declared abortion as a constitutional right, and by implication, overturned most laws against abortion in other US states.
They made it so easy and so acceptable.  You see, I was one of those young college girls that lived during that time; when the authorities and the leaders of our society persuaded gullible young women that their newly-found sexual freedom should not be punished with the burden of a child.  I can remember hearing during a college orientation class that birth-control pills were easily available at the Health Center.  And if you somehow slipped up, well, the Morning After Pill was just as readily available.  And if you just couldn't manage to keep up with the cycle of pills, then there was always a way out of your predicament.  And sadly, I knew many girls who took advantage of that Supreme Court decision --- some of them more than once.
I often think of those naive young dorm-mates of mine, and speculate about how they deal with the guilt.  They fell for the promises of "free love" and the sexual revolution, and I wonder if they realized at the time what they were destroying.  How many of them regret their irresponsibility and the taking of an innocent life? 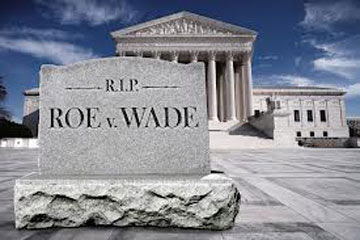 Interestingly enough, the two young women who served as plaintiffs in these cases, and whose identities were hidden, have now publicly denounced their roles in these historic cases.  In regards to the Doe v. Bolton case, the plaintiff, Sandra Cano, filed a motion in 2003 to re-open the case claiming her attorney lied to her, and that she had not been aware that the case had been filed on her behalf.  Furthermore, if she had known she would not have supported the litigation. The district court denied her motion, and she appealed. When the appeals court also denied her motion, she requested review by the United States Supreme Court. However, the Supreme Court declined to hear Sandra Cano's suit to overturn the ruling.
In the case of Roe v. Wade, the plaintiff, Norma McCorvey, has also condemned the Supreme Court decision, and said she was also lied to by her attorneys.  In her own words:  "As the class action plaintiff in the most controversial U.S. Supreme Court case of the twentieth century, I only met with the attorneys twice. Once over pizza and beer, when I was told that my baby was only “tissue”. The other time at Coffee’s (the attorney) office to sign the affidavit. No other personal contacts. I was never invited into court. I never testified. I was never present before any court on any level, and I was never at any hearing on my case. The entire case was an abstraction. The facts about abortion were never heard. Totally excluded from every aspect and every issue of the case, I found out about the decision from the newspaper just like the rest of the country. In a way my exclusion, and the exclusion of real meaningful findings of fact in Roe v. Wade, is symbolic of the way the women of the nation and their experiences with abortion have been ignored in a national debate by the abortion industry. It is what the abortion industry thinks is good for women which is presented. Not the reality of their experiences."
What a sad pronouncement upon our culture.  Once again, we see figures of authority with "an agenda", and the will to stop at nothing to achieve their goals.  And look what it has cost us!  The souls of 50 million babies crying out across our land!  We deserve the wrath of an angry and righteous God.
Can we ever turn the tide?  Abortion crosses all classes of citizens, races and ages.  There is no discrimination when offering the choice of killing an unborn child.  And now, one's faith cannot protect you from government mandated health plans that pay for such life-stopping options as abortion-inducing drugs.  I wholeheartedly applaud companies such as Hobby Lobby and Dominos Pizza for their stand against Obamacare.  When a government thinks they have the right to force Christians to go against their faith, then we have truly gone too far.  Forty years later, we are seeing the legacy of destroying God's miracle of creation.   At that time, Government thought they could over-rule God. They gave us an unholy option.  Now, they think they can replace Him and force us to go against our faith.  God help us to deny this latest offense against You!

Isaiah 57:5    "You burn with lust among the oaks and under every spreading tree; you sacrifice your children in the ravines and under the overhanging crags."