Persecution In The Classroom

You may have seen the news story earlier this week about Joelle Silver, the New York high school teacher who has been threatened with loss of employment unless she removes Christian messages and items from her classroom.  Ms. Silver had been employed as a Science teacher for seven years when she received a letter from her school superintendent.
The letter, besides being condescending by implying that Ms. Silver was familiar with the First Amendment, at least to some degree, then goes on to give a weighty argument that a 1947 Supreme Court decision (Everson v. Board of Education) actually held that the First Amendment applies to the States, and that the Establishment Clause forbids not only practices that "aid one religion" or "prefer one religion over another", but as well those that "aid all religions".  The letter then goes on to declare that the Establishment Clause requires that the government pursue a course of "complete neutrality towards religion", and not promote religion or entangle itself in religious matters. 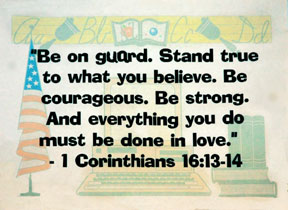 Furthermore, the letter stated that, as a public employee, the First Amendment rights accorded to every citizen, do not apply to her.  The School Superintendent even went so far as to say, "When a citizen enters government service, the citizen, by necessity, must accept certain limitations on his or her freedoms." Excuse me?  I don't think a citizens place of employment is stipulated in the Constitution.
I find all this high falutin' and patronizing speech quite curious since, according to an article on the  Knowledge is Power website, the U.S. public school system is being strongly urged by the Administration to adopt the Common Core State Standards. (At this time 45 states have adopted it).  This article and many more that I ran across warn that the course curriculum includes the study of Islam as a world religion, and all the wonderful benefits it brings to society. So where's the "complete neutrality towards religion"?  Why would this be agreeable, yet Ms. Silver is not allowed to present any remnant of her religion?
And just what did this teacher do that was so objectionable?  Again, within the letter, the Board of Education was only too kind to supply "examples of her personal religious expression", including posters, with Biblical verses, placed around her classroom.  Some of them read:

Wash me thoroughly [and repeatedly] from my iniquity and guilt
and cleanse me and make me wholly pure from my sin! - Psalm 51:2

The Lord is my Rock, my Fortress, and my Deliverer; my God, my keen and firm Strength in Whom I will trust and take refuge, my Shield, and the Horn of my salvation, my High Tower. - Psalm 18:2

The heavens declare the glory of God;
and the firmament shows and proclaims His handiwork. - Psalm 19:1

Let them praise and exalt the name of the Lord, for His name alone is exalted and supreme! His glory and majesty are above earth and heaven! - Psalm 148:13

Personally, I think that today's students would be well-served to have the influence of these Bible verses in their lives.  Biblical inspiration was good enough for nearly nine generations of Americans, and with its removal, I think we can see the steady decline of our culture.  But this wasn't her only transgression.  Oh, no!  She even went so far as to superimpose another Bible verse over computer-generated images of the American flag. (Gasp!)  The Bible verse?

Be alert and on your guard; stand firm in your faith. Act like men and be courageous; grow in strength!  Let everything you do be done in love.  1 Corinthians 16:13-14 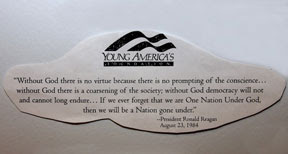 But Ms. Silver further aggravated the School Board with images of the cross in her classroom, a "Prayer Request" box on her desk, and by sponsoring a Bible Study Club.  And to add to her list of offenses, she actually had the nerve to post a quote on her classroom wall by President Ronald Reagan: "Without God there is no virtue because there is no prompting of the conscience ... without God there is a coarsening of the society; without God democracy cannot and will not long endure .... if ever we forget that we are One Nation Under God, then we will be a Nation gone under."
As we should expect, it was an atheist group who complained about Ms. Silver's expression of her faith and prompted the "counseling" letter.  The long and short of it is that Ms. Silver must stop her actions or face being fired.  But the School Superintendent and Board of Education didn't foresee just how much fight this teacher had in her.  She sued, claiming her First Amendment rights were violated.  “As a Christian and as an American I feel it’s incredibly important to fight to protect the rights that people have died to give me.”  I can think of no more noble cause.
By this time, it should be very clear that not only our religious freedom, but the Constitution, itself, is under attack.  Here, we have the First Amendment under fire, and this week, we have seen the Second Amendment come under extreme attack.  Do not think that these will be the last.  These rights were inspired by the Bible and if the Devil can convince civil authorities to dismantle them one by one, he will not only impugn the Constitution, but God Himself.  It is inherent upon each of us to do battle for our God and our Republic.  The very nature of our survival, both physically and spiritually, depends on it.   I believe that Ms. Silver and her posters are a good start towards reintroducing God into our culture.

Tune in tomorrow for my initial thoughts on the Executive Orders issued on gun legislation.  I couldn't help reading between the lines and will share my observations, simple though they may be.

Deuteronomy 12:28    "Be watchful and obey all these words which I command you, that it may go well with you and with your children after you forever, when you do what is good and right in the sight of the Lord your God."
Posted by Pam Kohler at 7:00 AM