There are any number of blogs and websites you can read that will chew on, and ponder over, just what is the true significance of the 23 Executive Orders issued by the White House on Wednesday.  They will give their expert and legal opinions on how they will affect legal gun owners and ignore the Constitution.... and they will all have merit.  I am neither an expert nor Constitutional lawyer, but I am reasonably intelligent, and I think I can see past some of the "guv-ment speak" in these ordinances.  So, for what it's worth, here's my simple and straightforward take on them:

1.  Issue a Presidential Memorandum to require federal agencies to make relevant data available to the federal background check system.  As I understand it, National Instant Background Check System (NICS), launched by the FBI, currently only lists that Mr. or Mrs. American bought a gun.  This EO would now require the system to include such "relevant data" as what gun, what accessories (mags), etc.  Looks, to me, like they are compiling a list to know who owns what.

2.  Address unnecessary legal barriers, particularly relating to the Health Insurance Portability and Accountability Act, that may prevent states from making information available to the background check system.  This would eliminate Mr. or Mrs. American's privacy through the doctor/patient privilege.  This EO would now allow doctor's to provide NICS with info on all your activities, including any use of weapons in hunting, target practice, etc.

4.  Direct the Attorney General to review categories of individuals prohibited from having a gun to make sure dangerous people are not slipping through the cracks.  Allows the government to decide who gets to keep what guns.  They will decide the classifications of "acceptable" gun owners, and which classification you fall into, based on information gathered from EOs 1, 2, and 3.  From the information entered into NICS, the government will decide if you are mentally stable enough, or responsible enough to have the firearms you own.  And can anyone imagine that these classifications will get tighter as time goes on? 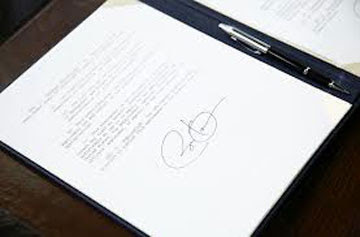 5.  Propose rule making to give law enforcement the ability to run a full background check on an individual before returning a seized gun.  I think we can agree that "propose rule making" can be translated as "make mandatory".  And based on the new categories established in EO 4, you may not qualify to get that legally-owned gun (that was illegally stolen from you) returned.  Another way to limit guns in the hands of legal firearms owners.

6.  Publish a letter from ATF to federally licensed gun dealers providing guidance on how to run background checks for private sellers.
7.  Launch a national safe and responsible gun ownership campaign.
8.  Review safety standards for gun locks and gun safes (Consumer Product Safety Commission).  These are all methods of making gun dealers, gun owners, and gun manufacturers register with the government in order to continue their association with guns.  "Mr. American, we see by the NIC System, that you own X gun.  Have you taken the National Gun Safety course, sir?  No?  Well, then you may not legally keep that gun in your home."  "Mr. Gun Dealer, in order to keep your license, we are going to have to see the background checks you've done on all private sales."  And by the way, all those private sales are now public and in the government files.  And there's no telling what ridiculous mandatory regulations they will come up with for gun locks and safes!

9.  Issue a Presidential Memorandum to require federal law enforcement to trace guns recovered in criminal investigations.  They already do that.  This just allows them to enforce EO #5.  Don't count on recovering your stolen weapon.

10.  Release a DOJ report analyzing information on lost and stolen guns and make it widely available to law enforcement.  Just another way of compiling their lists on gun owners.  What's to analyze?  It was lost or stolen!  Could it be that if they determine you were negligent in the handling of your gun, that you will fall into one of those classifications or categories in EO #4, and therefore be denied gun ownership?

11.  Nominate an ATF director.  Just the thought of who that might be makes my skin crawl.

13.  Maximize enforcement efforts to prevent gun violence and prosecute gun crime.  Isn't this really saying, enforce the laws that are already on the books?  Why not try that first?  Adding more laws or Executive Orders is not the answer.

14.  Issue a Presidential Memorandum directing the Centers for Disease Control to research the causes and prevention of gun violence.  I almost laughed out loud at this one!  The CDC can't even get the flu vaccine right!  And now you want them to research what causes gun violence and how to prevent it?  Once again, the blame is pointed at the inanimate object.  Why not have them research the decaying moral values in this country, or the breakdown of the family?  This is a joke!  Watch out for "mental health" issues to become a byword.

15.  Direct the Attorney General to issue a report on the availability and most effective use of new gun safety technologies and challenge the private sector to develop innovative technologies.  Can anyone see that "new gun safety technologies" will include GPS, codes on gun parts and ammo, and so-called "smart guns" that only shoot in the hands of authorized users?  And that "challenging" the private sector once again means meeting these regulations in order to sell their products.

16.  Clarify that the Affordable Care Act does not prohibit doctors asking their patients about guns in their homes.
17.  Release a letter to health care providers clarifying that no federal law prohibits them from reporting threats of violence to law enforcement authorities.  These two EOs actually mean that doctors will be forced to ask their patients about guns, and it will be mandatory for them to report patient information.  Once again, the doctor/patient privilege will no longer exist, according to the government.  If they want to keep their licenses, they must comply.  Doctors have some tough decisions to make, and they are on the front lines of this un-Constitutional campaign.

18.  Provide incentives for schools to hire school resource officers.  Looks like another government job; what does "resource" officer mean?  Security officer?  Will they be able to carry guns?  And will they be part of a government union?  More tax-payer dollars down the drain to inflate government bureaucracy.

19.  Develop model emergency response plans for schools, houses of worship and institutions of higher education.  Doesn't this already fall under a SWAT team's responsibility?  It seems to me they already have a response plan; they just have a bad arrival time.  Which is why Mr. or Mrs. America, as a trained CHL holder in that school, church, or college can do a better job of stopping an active shooter.

20.  Release a letter to state health officials clarifying the scope of mental health services that Medicaid plans must cover.  Looks like a veiled threat to me.  "You must gather information on gun ownership from Medicaid patients, so we can plug it into our database and set up our classifications --- or you lose your funding."  It's that simple.

21.  Finalize regulations clarifying essential health benefits and parity requirements within ACA (Affordable Care Act - ObamaCare) exchanges.   If you have a gun, you may not be able to get health insurance.  They will decide if you are mentally healthy enough to own a gun -- based on the above mentioned classifications -- which they will determine.  Let's not forget the "parity" clause.  We must make things "equal", don't you know?  Does that mean by race, or income level, or gun ownership?  Oh, what a web they weave!

22.  Commit to finalizing mental health parity regulations.  See!  How do you make regulations "equal" in regards to mental health?  Does this mean subsidies for the poor and disadvantaged? This one is truly puzzling, but I guarantee you it will cost the taxpayer.

23.  Launch a national dialogue led by Secretaries Sebelius and Duncan on mental health.  Look for the definition of "mental health" to broaden to include characteristics of gun owners.  There's a method to their madness!

I began this post by declaring my lack of credentials in de-mystifying these latest Executive Orders.  In fact, I may be wrong in my analysis, and will surely be labeled as paranoid.  I must admit, that I expected more blatant and obvious missives thrown at the Constitution.  The language seems especially innocuous; but perhaps that was deliberate.  Come across as less threatening; even somewhat logical, and the "sheeple" will agree and fall in line.  But with these seemingly "reasonable" (haven't we heard that word a lot lately?) and mildly-worded Orders from the White House, it seems to me that they are building a big net of information (See EO 1, 9, and 10) with which to enforce their limitations of gun ownership (through EOs 4, 16, 17 and 21).   Until we see what's really behind the curtain, I think we should err on the side of caution and be highly skeptical anytime we see individual privacy, ownership and liberty come under the microscope.  What are your thoughts?

Psalm 71:10-11     "For my enemies talk against me; those who watch for my life consult together, Saying, God has forsaken him; pursue and persecute and take him, for there is none to deliver him."