China And The World's Oil (That Means Ours, Too!)

I have heard it said that the oil boom in Texas is single-handedly keeping our economy going, and it is largely responsible for propping up Wall Street.  But it seems that the good ol' USA is not the only country benefitting from the massive Eagle Ford oil field in South Texas.  World Net Daily recently published an article that says China has been allowed to quietly buy major interests in the Eagle Ford and other oil and natural gas resources across the U.S.

As the article suggests, I guess it's one way our government can keep the Chinese appeased in regard to the money we owe them.  If they have a vested interest in our economy, then they will most likely continue lending us the money we need to help offset our $1-trillion-plus annual federal budget deficits.  Of course, it doesn't hurt that China passed the U.S. in their consumption of oil.  It is no secret that China is looking to make deals with anyone they can, in order to feed their appetite for oil.  Their economy continues to grow, while ours flounders, and they need this valuable energy resource to continue their expansion. 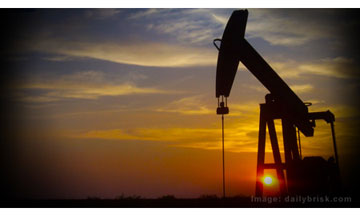 Allowing China to buy into U.S. energy production is a reversal of the previous Administration's policy, which viewed such a practice as a threat to national security.  I can understand that.  But what I don't understand is this .... if we are seeking to become energy independent, and we have this incredible reserve of oil within our own borders, why would we invite a foreign country (and one that obviously doesn't have our best interest at heart) to partake of our riches?  Since we currently import 60% of our oil, wouldn't it make sense to keep this valuable resource for ourselves?  Is the end result going to be that we end up buying our own resources back from China???
World Net Daily further reported that Beijing has been developing a proposal in which real estate on American soil owned by China would be set up as “development zones” to establish Chinese-owned businesses and bring in its citizens to the U.S. to work.  With unemployment in the U.S. hovering at the  "official" level of 8%, does anybody think it is a good idea to create autonomous foreign economies within our own country?
And Texas oil companies are not the only U.S. interests China has acquired.  The Wall Street Journal reported these acquisitions:
•  Colorado: CNOOC gained a one-third stake in 800,000 acres in northeast Colorado and southwest Wyoming in a $1.27 billion pact with Chesapeake Energy Corporation.
•  Louisiana: Sinopec ( a Chinese state-owned super-large petroleum and petrochemical enterprise group) has a one-third interest in 265,000 acres in the Tuscaloosa Marine Shale after a broader $2.5 billion deal with Devon Energy.
•  Michigan: Sinopec gained a one-third interest in 350,000 acres in a larger $2.5 billion deal with Devon Energy.
•  Ohio: Sinopec acquired a one-third interest in Devon Energy’s 235,000 Utica Shale acres in a larger $2.5 billion deal.
•  Oklahoma: Sinopec has a one-third interest in 215,000 acres in a broader $2.5 billion deal with Devon Energy.
•  Texas: CNOOC acquired a one-third interest in Chesapeake Energy’s 600,000 acres in the Eagle Ford Shale in a $2.16-billion deal.
•  Wyoming: CNOOC has a one-third stake in northeast Colorado and southeast Wyoming after a $1.27 billion pact with Chesapeake Energy. Sinopec gained a one-third interest in Devon Energy’s 320,000 acres as part of a larger $2.5 billion deal.
So let me get this straight ... if China buys one-third interest in all these companies, and the U.S. economy flatlines and these companies go broke, guess who will be ready and willing to buy out their interests?  See how my conspiratorial mind works?
But China has not limited themselves to the U.S.  In December, Forbes Magazine reported that the Canadian government approved China’s biggest overseas energy acquisition, a $15.1 billion takeover of Nexen Inc. by CNOOC Ltd., China's state-owned and largest offshore driller.  In case that doesn't impress you, Nexen is the second-largest oil producer in the U.K. North Sea.  But lest you think China has limited their acquisitions to the North American continent, let me point out that China has invested in 49 of the 54 countries that make up the African continent.  They haven't limited their business deals to strictly oil and natural gas, however; they have bought sizable interests in a Metal Mining company in Zambia, and a cement plant in Nigeria.  An estimated 2,180 Chinese companies, many of them privately owned, are doing over 7,800 projects in Africa currently.
So if you were skeptical about China's long-term goals before, I'm betting you've had a change of mind after reading these statistics.  You won't see these moves being touted in your local newspaper, but make no mistake --- China is playing this chess game to win.  And our government doesn't appear to give a damn.

Exodus 15:9     "The enemy boasted, ‘I will pursue, I will overtake them. I will divide the spoils; I will gorge myself on them. I will draw my sword and my hand will destroy them.’ "