My post today is inspired by the Keynote address of Rabbi Jonathan Cahn, who spoke at the Presidential Inaugural Prayer Breakfast in Washington, D.C. this week.

As a serious lover of history, it is with reverence and awe that I regard the use of President Lincoln's Bible being used for the oath of office this last week.  The comparisons between Presidents Lincoln and Obama have become popular.  Both were senators from Illinois; both are known as skilled speakers, whose words impress and persuade (although Lincoln hand-wrote his speeches, while Obama uses a speechwriter who is a historian, well-versed in Lincoln).  The fact that both are presiding over a divided nation cannot be disputed.
Mr. Obama's fondness for invoking Lincoln during his speeches is well-known, and the use of the former President's Bible is a show of respect and honor.  But I wonder if the President's speechwriter is aware of the immense faith of the President who presided over the darkest period of our nation's history.
It goes without saying that our modern society and culture have attempted to diminish Lincoln's faith in God, just as they have so many of our Founding Fathers and historical Patriarchs.  But there are many instances that point to his profound belief that he was "a chosen instrument in the hands of the Almighty."  One cannot ignore the fact that on nine separate occasions during the forty-nine months of his presidency, Lincoln called his fellow citizens to humble themselves before God in public penitence, prayer, fasting, and thanksgiving. His great Second Inaugural has been called “a prayer of confession for the whole nation.” 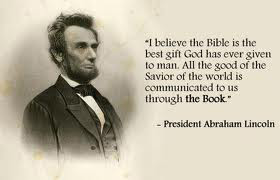 Just read his words in the 1863 Proclamation for a National Day of Prayer:  And whereas it is the duty of nations as well as of men, to own their dependence upon the overruling power of God, to confess their sins and transgressions, in humble sorrow, yet with assured hope that genuine repentance will lead to mercy and pardon; and to recognize the sublime truth, announced in the Holy Scriptures and proven by all history, that those nations only are blessed whose God is the Lord. And, insomuch as we know that, by His divine law, nations like individuals are subjected to punishments and chastisements in this world, may we not justly fear that the awful calamity of civil war, which now desolates the land, may be but a punishment, inflicted upon us, for our presumptuous sins, to the needful end of our national reformation as a whole People?
We have been the recipients of the choicest bounties of Heaven. We have been preserved, these many years, in peace and prosperity. We have grown in numbers, wealth and power, as no other nation has ever grown. But we have forgotten God.  [Emphasis is mine.] We have forgotten the gracious hand which preserved us in peace, and multiplied and enriched and strengthened us; and we have vainly imagined, in the deceitfulness of our hearts, that all these blessings were produced by some superior wisdom and virtue of our own. Intoxicated with unbroken success, we have become too self-sufficient to feel the necessity of redeeming and preserving grace, too proud to pray to the God that made us! It behooves us then, to humble ourselves before the offended Power, to confess our national sins, and to pray for clemency and forgiveness....
Could these words not be spoken in truth today?  Actually they were.  They were recited at the Presidential Inaugural Prayer Breakfast in Washington DC on Inauguration Day, by Rabbi Jonathan Cahn, who was the keynote speaker.  Rabbi Cahn is the best-selling author of The Harbinger, a book I highly recommend.  But he invoked the words of President Lincoln as reminiscent of another time our nation found itself in a similar state of darkness; just as we do today.  And he wasn't afraid to stand in our nation's capital and pronounce the nation's need for repentance.
Rabbi Cahn was daring in his address, pointing out the similarities between America and the nation of Israel; both of whom were singled out by God to be consecrated to His purposes.  But now, like the ancient nation of Israel, we are a civilization at war against the very foundation upon which we were established. 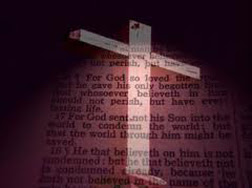 He was bold in declaring that our culture has turned on itself ---- what we once called immoral, we now celebrate.  What we once knew in our souls to be right, we now war against.  Our society grows more vulgar and dark.  Those who profess a faith in God are labeled as intolerant of others, and God, Himself, is ridiculed, mocked and blasphemed.  Rabbi Cahn says it is "as if a spiritual amnesia has taken over the land."  We have forgotten that those who came to these shores were committed to His purposes and glory.  He warns that we have committed a fatal error.  We have ruled God out of our culture, our government, our economy, our lives, and out of the instruction in our children's lives.  We have made ourselves strangers to God and embraced the idols of sensuality, violence, greed, and carnality.  And we wonder why we are a declining nation.
We live in a new America; an America where the Bible is seen as contraband and nativity scenes are dangerous.  We live in an America where ministers are driven out of the public square and barred from praying at the Inauguration for stating what the Bible states as Sin.  We live in an America where profanity is treated as holy, and holiness is proclaimed profane.
Ancient Israel offered up thousands of its children to the pagan gods Baal and Molech.  America has offered up millions of its children to the false idol called Abortion and Freedom of Choice.  Rabbi Cahn pointed out that over 50,000,000 souls were not able to witness the Inauguration of our President because their lives were legislated out of existence.  As a nation, we are accountable for those lost lives.  And as the good rabbi so eloquently stated, "No nation can war against the very source of its blessings, and expect its blessing to remain."
So while I applaud President Obama for his gesture of respect towards one of our most courageous and beloved Presidents, I will pray that he, too, will humble himself to be used as an instrument in the hands of the Almighty.  God used Lincoln to restore this land, but then perhaps the American people took to heart their President's call for repentance on that long-ago day of National Prayer.  We'd better learn from their experience, or I fear our restoration will be hopeless.

2 Corinthians 12:20-21     "For I am afraid that when I come I may not find you as I want you to be, and you may not find me as you want me to be. I fear that there may be discord, jealousy, fits of rage, selfish ambition, slander, gossip, arrogance and disorder.  I am afraid that when I come again my God will humble me before you, and I will be grieved over many who have sinned earlier and have not repented of the impurity, sexual sin and debauchery in which they have indulged."