A Word of Caution: Check Your Medical Records!

This is going to be a short post, but I believe it will be long on valuable advice.  This past week, PLW and I were helping his parents get unpacked from their recent move to a small ranching community near us.  To say that we are relieved to have them out of a large, left-leaning, progressive state capital cannot be understated.  But that is another story.
They were commenting on the process of getting their medical records changed from Big City doctors to their new Rural community doctors.  My father-in-law suffered a heart attack several years ago and has diminished lung capacity and problems with arthritis.  Their old doctor had mailed them a copy of his medical records to be transported to the new physician.  He mentioned, obviously concerned, that there were things on those records that he had never experienced. 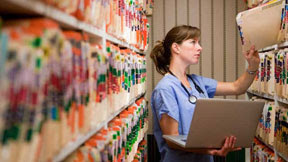 "Like what?" we asked.  So my mother-in-law searched through the files on her office desk and began reading the list .... hepatitis-like syndrome, elevated sugar levels, hypo-functioning kidneys, undetermined chest pain .... etc.  My father-in-law was adamant that he had never been diagnosed with any of these!  In fact his doctor had always gone over any blood work with him, and told him all of his levels were "within the acceptable range".
Of course, we told him that he needed to call the doctor's office and ask for an explanation, and if they could not substantiate the record with actual test results, then he needed to get them removed from his permanent records.
You know where I'm going with this, right?  And if you have visited a doctor's office within the last few years, you very likely sat through an inquisition of your health habits, and watched all that information being fed into a computer, and straight to the federal government.  As for myself, I distrust any office that follows the letter of the law to that extent.   And just how is this information construed?  Do they enter a patient's symptoms into a database, which then determines, based on meeting 5 out of 10 of the characteristics of a medical condition, such as hepatitis, that you are indeed suffering from that disease?  Are there criteria being met to establish a definitive diagnosis, even if that diagnosis cannot be legitimately made?
In the past, I'm sure you've experienced your doctor telling you he/she is just not sure what is going on.  So now, is that no longer acceptable by some health care committee in DC?  Are we letting computer programs determine what our diagnosis is, rather than qualified doctors?  And what's wrong with having a question mark next to an office visit?  Perhaps more time is needed, or tests, to be able to give a conclusive opinion.  I will admit, that my suppositions are not based on any known facts; but what is the explanation for these false diagnoses?
Maybe I'm over-reacting, but my father-in-law was so upset that all this here-to-fore unknown "conditions" are part of his permanent medical records.  So I'm letting you know that it might be a good idea to ask to see a copy of your medical records, just in case you need to dispute something.  To be honest with you, I'm not sure you can get misinformation removed if you wanted to, but we all have the right to know what our records say.  And I have a feeling those records are going to play into the quality of individual health care being designed for us in the near future.   In this case, forewarned will allow you to prepare a defense in advance of the coming health care debacle.