I must admit that I was surprised (and elated) to hear that the U.S. Senate blocked the ratification of the U.N. Convention on the Rights of Persons With Disabilities.  And you probably guessed it, since Republican Senators were the ones instrumental in stopping the passage of yet another attempt by the U.N. to supersede the U.S. Constitution, they were labeled uncaring, insenstive, and anti-every group except old, rich, white men.
If the Progressive bleeding-hearts who supported this treaty would just take a step back and look at this thing logically, they might realize that going along with this piece of legislation was quite unnecessary, besides being completely unconstitutional.  After all, the treaty was modeled after the Americans with Disabilities Act of 1990 (ADA). The ADA is a wide-ranging civil rights law which prohibits discrimination based on disability. ADA is considered the "Civil Rights Act of 1964 for people with disabilities," and the blueprint for effective protection of rights around the world.  The U.S. has the most robust laws protecting the disabled in the world, so why do we need to join forces with the UN? 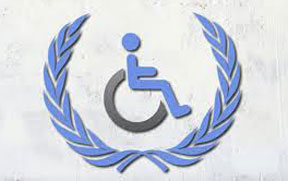 Just reading some of the items of the Preamble to this treaty, gave me the creeps.  For example, item E reads .... Recognizing that disability is an evolving concept and that disability results from the interaction between persons with impairments and attitudinal and environmental barriers that hinders their full and effective participation in society on an equal basis with others (emphasis is mine) .... tells me that the UN is deliberately refusing to define "disability"; perhaps to incorporate a much broader interpretation in order to control more aspects of social programs and national policies.  The use of "attitude" and "environmental" as possible barriers should give you an idea where they are headed.  My fear is that their goal is to eventually include economic, social and cultural considerations under the banner of "disabled."
But the most chilling concept of this treaty was buried a little over a third into it, namely Article 18, Item 2:  Children with disabilities shall be registered immediately after birth and shall have the right from birth to a name, the right to acquire a nationality and, as far as possible, the right to know and be cared for by their parents.  You read that correctly.  If you, an American citizen, give birth to a disabled child (and remember, "disabled" is an evolving condition), then you would be required to register your child with the UN.  What if, in 5 or 10 years, the UN decides that "disabled" includes a child with learning disabilities, or a child that suffers from chronic hay fever due to those darned "environmental barriers that hinder her from full and effective participation" in outdoor play.  After all, if the child can't read "on an equal basis with others", or run and play "on an equal basis with others", then what's to keep that child from being labeled "disabled"?  Read it --- it's there in Item E (above).
And do you really want your child on some register that the government and the UN can monitor?  And then determine that you are not able to adequately "know or care" for your child? In effect, under this treaty, your rights and authority as a parent can be taken over by a global entity.  But the bleeding hearts don't tell you that aspect of the treaty, do they?
What's more, according to Article 9, Item 1a, measures, which shall include the identification and elimination of obstacles and barriers to accessibility, shall apply to: Buildings, roads, transportation and other indoor and outdoor facilities, including schools, housing, medical facilities and workplaces.  That means every homeowner would have to make their house accessible for citizens with disabilities.
As frightening and Orwellian as this treaty sounds, I am most dismayed at the thought that our legislators would even consider giving up U.S. sovereignty and self-government for UN compliance.  Since this is an international and global treaty, the U.S. (make that the U.S. taxpayer) would have to fund disability programs around the world.  And after wading through the treaty (see link above), I'm still unclear if it would become the law of our land.  I guess the fact that it is unclear makes it potentially possible.  In fact, White House Press Secretary Jay Carney tried to spin this pact as a "positive rights" treaty, saying, "Ratification would require no changes to U.S. law, as the United States already leads the world in promoting and protecting the rights of persons with disabilities."  First of all, I believe he made my point that we already have adequate laws.  But he's disingenuous in the fact that it might not change U.S. law, but could give the UN authority and power over U.S. law.  That's not a chance I'm willing to take.
But the fact that this was presented to our governing body, the Senate, as a treaty makes no sense to me.  Protection of the rights of the disabled is important; that's a given.  But it is a matter of domestic U.S. law.  It is not a foreign relations matter and therefore should never have been introduced as a "treaty", which needs ratification by two-thirds of the Senate.  And speaking of "treaties", I'm going to leave you with this final thought ....  as stipulated in the Declaration of Independence, treaties may not be consummated with other than sovereign nations.  The 1945 ratification of the UN Charter as a treaty is effectively un-Constitutional, because the last time I looked, the UN is not a sovereign nation.
We've been lulled into complacency regarding our Constitutional rights.  Heck, we don't even know our Constitutional rights!  We have recklessly trusted those who represent us to safeguard those rights for us, and we've slept while thieves robbed us blind.  We got lucky this time --- we dodged a bullet with this particular "treaty", but don't think the UN (or their New World Order minions) will give up that easily.  Senators Reid, Kerry, Lugar and McCain have voiced their hope that "the Senate will reconsider this treaty soon in the next Congress."  Let's stay on our toes, Americans.  They are coming for our sovereignty and our individual rights!

Proverbs 26:23-25    "Like a coating of silver dross on earthenware are fervent lips with an evil heart. Enemies disguise themselves with their lips, but in their hearts they harbor deceit. Though their speech is charming, do not believe them .... "
Posted by Pam Kohler at 7:00 AM