A Tribute To A Hero

You know that I take every opportunity I can to honor those who have protected our freedom and our liberties.  Seventy-one years ago today, our nation was struck with the horror of Pearl Harbor.  The Imperial Japanese Navy attacked the U.S. naval base with 353 fighters, bombers and torpedo planes in two waves, launched from six aircraft carriers.  Four Navy battleships were sunk, and the remaining four were badly damaged.  The U.S. suffered 188 destroyed aircraft, and 2,402 Americans were killed, plus 1,282 wounded. 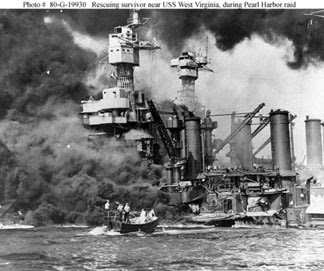 But this post is about more than the statistics of that tragic day.  Less than 2700 survivors from that infamous day remain.  The Pearl Harbor Survivors Association, founded in 1958, was dissolved at the end of 2011.  It was just too difficult for the aging members to continue their affiliation.  So in honor of them, I want to dedicate today's post.  Maybe the survivors no longer have an official organization, but it is the least we can all do to remember their legacy.  And this is one man's story:

Sam Maynor, Jr., grew up in a little town in South Carolina.  He was one of the survivors aboard the destroyer U.S.S. Reid.  Maynor and his shipmates had to smash the lock off a mounted machine gun after the sneak attack, because the guy who held the key was on the beach.  But they successfully manned the guns and even downed one of the enemy planes.
Because, you see, Sam had the stuff of a hero.  He was like thousands of the rangy and lean and rawboned mill-town boys who came from such poverty that they had no shoes and no chance to go to school.  Like millions of boys, including my own father, he lied about his age to get into that war.
Maynor was in battles at Coral Sea and Casablanca, and while on ship, he endured five typhoons and everything the sea could throw at him. He was gone five long years.  And apparently he didn't write home often enough.  His mother wrote a letter to the President, and it wasn't long before young Sam was ordered by the captain of the ship to write to his mother.
But there was a beautiful young girl, who worked in the local dime store, that waited out those five long years for her sailor to come home.  Sam and Mildred were married for 60 years before her death.  By all accounts, he was a good husband and father, and was a humble and generous sort of guy.  He came home from the war and worked as a brakeman on the railroad, and then worked in the textile mills.  He even helped found a church.
All those years, he didn't talk much about the awful battles and the death; about American sailors fighting with pistols and rifles as ships sank under their feet.  He had the memories alright.  Ardrey Hasty, a kid he grew up with, died at the age of 18 at Pearl Harbor.  Bill Lovelace, another childhood friend, lost a leg that day.  But as the years past, friends at church and his grandchildren began to coax the stories out of Sam.  He began speaking at schools, so that children could have first-hand accounts of Pearl Harbor -- not some watered down version, or politically correct interpretation of history.  Sam was the real deal.

Sam would stand at the front of the room and tell his story, and you wouldn't hear a peep out of those kids.  He stood tall and thin, and his hands were leathery.  He might not have looked like Hollywood's version of a hero, but after each time he spoke to a group of school children, they would give him a standing ovation.  They knew a real live hero when they saw one.
Sam died last week, and now there is one less hero to honor his fellow heroes who died that day.  We are losing our WWII vets each and every day; these men who deserve a special place in our history -- a history that is rarely acknowledged or valued these days among our younger generation.
Sam Maynor would not have considered himself exceptional or out of the ordinary.  He was just a South Carolina boy from the mill towns, who answered the call of his nation when it needed him.  But it is the likes of the thousands of Sam Maynors who didn't give up seventy-one years ago today.  They saved not only our nation, but the world.  Rest in peace, Mr. Maynor ..... and thank you!

2 Samuel 22:40-41    "You armed me with strength for battle; you humbled my adversaries before me. You made my enemies turn their backs in flight, and I destroyed my foes."