Remember about a week ago when I told you about my troubles with getting a prescription filled at Walmart?  Well there's a new twist to this seemingly unremarkable story.  I visited with the small, independently-owned pharmacy in the little town about 20 miles from my home.  The owner/pharmacist was only too happy to accept my business and assured me that there should be no change in my Blue Cross coverage.  We were mutually satisfied with our new relationship, and I made plans to pick up my prescription the next day.
When I went to pick up the medication the next day, I was given the wrong one.  My doctor specifically requests that my medication be name-brand, not a generic substitute.  No problem, they would correct it and I could pick it up later that afternoon. 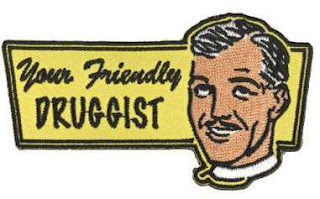 When I returned, I was surprised to find that the medication was $10 more than it was at Walmart.  I just assumed that Walmart was able to get a huge discount, due to their volume, but just wanted to make sure there wasn't another mixup.  By this time, the friendly neighborhood pharmacist recognized me, and was always courteous and patient.  His understanding was that there shouldn't be any difference in price, since it was regulated by Blue Cross.
He looked into the cost breakdown, noting his actual cost for the medication, what Blue Cross was willing to allow him, and then what my part of the cost would be.  The deep frown and puzzled look gave me a clue that something wasn't kosher.  He asked, "How much were you paying for this medication at Walmart?"  I told him, "$7.57."  He said, "Something's not right .... the medication costs me $24.75; for it to cost you $7.57, they would pay me $17.18 ---- but they're only paying me $7.25, which is why your price is $17.50 ($10 higher than at Walmart).  Let me give them a call and see why there's such a discrepancy."
Of course, it took awhile to get through to the Blue Cross customer service representative, and this kind gentleman patiently explained his questions, and then I saw his jaw clench and sparks begin to shoot from his eyes.  I listened to his end of the conversation .... "So you're telling me that regardless of the U.S. government and FDA regulations, you are going to consider this drug as a generic, and refuse to pay me the name-brand price?"  I could tell by his reaction, that he didn't get the answer he wanted.
He hung up the phone and shook his head in disbelief.  "They admitted that your medication is a brand-specific thyroid medicine, but they have arbitrarily decided that they will treat it as a generic, and only pay me that amount.  If I charge you the Walmart price, then I am losing $10."
I could see that we had a dilemma before us.  One of us was going to be out $10.  I told him I would check with my doctor and see if he would allow me to switch to the generic version.  I already knew the answer .... generic brands are allowed to have a greater variance in the dosage.  With a thyroid condition, my doctor wants me to have a consistent dosage which guarantees a uniform level for my thyroid.  After much thought, I returned to the pharmacy and told the owner that I had decided to absorb the cost myself.  It was worth it to me to support a small business owner and receive exemplary service.  I was through with the Walmart "attitude" and besides .... if I insisted on forcing him to lose money, then he would soon go out of business and Walmart would be my only choice.  No thank you!
He maintained that it wasn't fair, but I held my ground and said I was comfortable with my decision.  After all, PLW and I are small business owners, and we need to support each other, because heaven knows, when the full impact and knowledge of Obamacare comes crashing down around our heads, we are all going to have to make adjustments.
So I guess my point to this whole story is that Big Insurance is pretty much making up their own rules at this stage of the game; what will it be like for us consumers when we are pitted against them AND the Federal Government?  Better get your ducks in a row, folks.  Talk to your physicians and make a plan.  Be prepared for changes like we've never seen before.  It's gonna be a bumpy ride!