Unless you have been incommunicado for the last 48 hours, you are aware of the tragedy that struck the NFL this last weekend.  The reasons behind the murder/suicide of Kansas City Chiefs linebacker Jovan Belcher and his girlfriend, Kasandra Perkins, will be discussed for months.  It was a tragic event; a horrible action taken by a disturbed man.  And it is unfortunate that he chose a gun as his weapon of choice.  Because if he had chosen to kill his girlfriend with a knife, or run her over with his car, we would not have had to be subjected to the ridiculous lecture sportscaster Bob Costas felt entitled to offer the American public.
First of all, who does he think he is?  What makes him qualified to offer an opinion on this subject?  His bias was blatant and par-for-the-course for a media who hates the Second Amendment.  They refuse to realize that the gun did not commit the murder.  The man did.  Without Jovan pulling the trigger, the gun is not a factor in Kasandra's death.  Yet, the gun became the killer in Costas's diatribe.  And to add to the hypocrisy of his rant, he played the coward, and used the words of writer Jason Whitlock to advance his personal agenda.  Here is a portion of the Costa harangue: 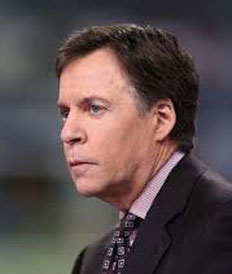 "Our current gun culture, Whitlock wrote, ensures that more and more domestic disputes will end in the ultimate tragedy, and that more convenience-store confrontations over loud music coming from a car will leave more teenage boys bloodied and dead.’
Handguns do not enhance our safety. They exacerbate our flaws, tempt us to escalate arguments, and bait us into embracing confrontation rather than avoiding it.
In the coming days, Jovan Belcher’s actions and their possible connection to football will be analyzed. Who knows? But here, wrote Jason Whitlock, is what I believe: If Jovan Belcher didn’t possess a gun, he and Kasandra Perkins would both be alive today."
My first thought is this .... Costas and his alter-ego Whitlock both blame the "gun" culture for domestic disputes raging out of control.  Have they considered "the culture" in general?  What about the "drug" culture?  Or the "hip hop" music culture that glorifies killing cops and raping women?  Once again, I'd like to point out that a gun is just one weapon of choice among these social criminals.  The guns can't "cause" someone to pull the trigger, yet both mind-altering drugs and hate-driven music can both instigate a mindset that encourages such violence.
And if they truly believe guns contribute to a high number of deaths in such "convenience-store confrontations", then why not work to enforce the strict gun laws that are on the books?  Both Washington D.C. and New York have some of the strictest gun laws in the nation, yet their rates of death-by-gun are among the highest in the nation.  So if more restrictive gun laws will limit deaths, as the anti-gun proponents claim, then their argument falls flat, as the DC and New York rates show.  And Costas and his gang always forget the statistics that show when guns are purchased in "right to carry" states, gun violence goes down.  Didn't mention that, did you, Bob? 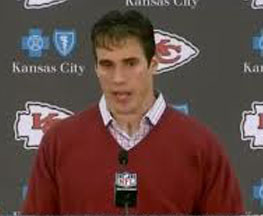 OK, now let's take a look at the comments from Brady Quinn, the Kansas City Chiefs quarterback.  Quinn talked about what he and others could have done to possibly prevent such a tragedy.
"We live in a society of social networks, with Twitter pages and Facebook, and that’s fine, but we have contact with our work associates, our family, our friends, and it seems like half the time we are more preoccupied with our phone and other things going on instead of the actual relationships that we have right in front of us.
Hopefully people can learn from this and try to actually help if someone is battling something deeper on the inside than what they are revealing on a day-to-day basis.”
In his comments, Quinn focused on the real heart of this issue.  He, too, pointed out how our culture has changed.  But rather than pointing to the instrument of Kasandra's death, he addressed the reasons that might have contributed to Jovan "using" that particular weapon.   The action was taken by Jovan, not the gun.  Quinn's comments show his compassion and humaneness. Costas's show his lack of empathy for domestic violence victims and the purposeful promotion of his personal anti-gun agenda.  He took advantage of the tragic deaths of two people to voice a tasteless and callous attack on the Second Amendment.  It was not the place nor the time.  Shame on you, Costas!

Psalm 17:10    "They close up their callous hearts, and their mouths speak with arrogance."

Email ThisBlogThis!Share to TwitterShare to FacebookShare to Pinterest
Labels: Firearms and Training, Our Culture., Values