While we, in America, are distracted with salacious sex scandals, threats of a "fiscal cliff", crushing new taxes, and fears of inflation, the nation of Israel has been preparing for war.  In response to increased Palestinian rocket assaults, an Israeli air operation, known as Pillar of Cloud, targeted Hamas leaders (killing Ahmed Jabari, commander of Hamas’s military arm, Ezz e-din al-Qassam), degrading its military infrastructure and demolishing its rocket stocks, especially the long-range Fajrs.
Southern Israel is on high alert in expectation of a furious Hamas reprisal for the loss of its leading terror strategist.  In fact, Hamas has announced its strategy for retaliation:  1)  Long-range rocket attacks near the major city of Tel Aviv;  2)  Suicide attacks inside Israel, launched from the West Bank;  and 3)  Assassinations of prime Israeli figures, most likely political, military and civilian. 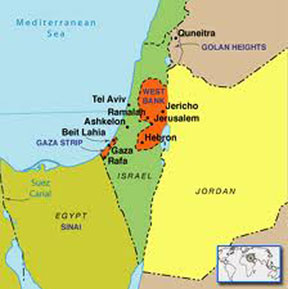 While the world will most certainly denounce Israel's actions, they were not unprovoked.  Since last Thursday, Hamas launched more than 120 rockets and mortars towards Jewish civilian population zones in Gaza.  Would you want our military to leave that kind of assault on our heartland go unanswered?  Israel did not.  They attacked 20 underground sites where both Hamas and the Iranian-backed Islamic Jihad group were hiding Iranian-provided rockets.
Hamas' response to Israel defending itself?  We are now at war with Israel.  They have opened the gates of hell.  They have issued a general call-up of terrorists and threaten more rockets and death.  But Israel is not cowering.  Prime Minister Benjamin Netanyahu issued this statement:  “We are set to expand our counter-terror operation if necessary.”  Experts theorize that could include combined attacks by the Israeli Air Force and Naval operations, and possibly a ground assault by reserve units if the Palestinian terrorist organization makes good on their threats to escalate the conflict.  All schools within range of the Gaza rocket strikes are closed and shelters are readied for the expected attacks.
The fear among Middle Eastern observers is that the Muslim Brotherhood may soon insert itself into the hostilities. Jabari (the deceased Hamas leader) was a favorite of the Brotherhood and it is well-known that Hamas is in contact with the Egyptian government to see if, and how, it might become involved in the conflict.  For now, Egyptian President Morsi seems to be hesitating, and instead, settled on re-calling his Ambassador from Tel Aviv and calling a UN Security Council meeting to "stop Israel's aggression."  For now, the diplomatic doors are still open between Egypt and Israel, but terrorist and jihadist groups will surely mount pressure to change that.
For those of us with a Biblical worldview, this rising conflagration is not unexpected.  It has been predicted and prophesied for thousands of years.  The ancient enemies of historic Israel are the same enemies of modern Israel.  And it doesn't turn out well for them.  It's all there in Ezekiel.  The prophecies of Chapters 36 and 37 have come true .... the rebirth of Israel, Jews pouring into the Holy Land after centuries in exile, and the rebuilding of the ancient ruins.  Could the coalition of nations in Chapters 38 and 39 who attack the land of Israel be far behind?
And it is not lost on me that Israel chose to call their air operation, Pillar of Cloud.  Any serious student of the Bible knows that this terminology refers to the presence and protection of Israel's God, who goes before them and fights for them.  He will not abandon them and will defeat the enemies of His people.  Join me in praying for the safety and deliverance of the Jewish people.

Exodus 14:19-20      "Then the angel of God, who had been traveling in front of Israel’s army, withdrew and went behind them. The pillar of cloud also moved from in front and stood behind them, coming between the armies of Egypt and Israel."