New York: A Look At Our Future?

By now, everyone has probably seen the images coming out of New York and heard the stories ..... long lines at the gasoline pumps that eventually don't work because there is no electricity to transfer the fuel from the tanks to the pumps to the cars ..... people dumpster-diving for food out of trash bins ..... no way to heat homes in the near freezing weather; the elderly and the young are suffering ..... no water, no food ..... tempers rising, looting beginning. 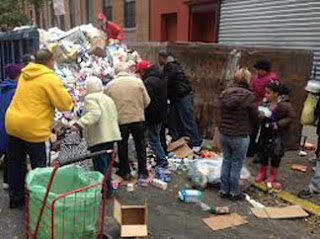 In case you are one of those who have scoffed at the idea of storing extra food and supplies, take a look at the "real-time" picture of what that looks like when a crisis occurs.  Keep in mind that this is you, if you have not taken the time to prepare.  How much easier would it be on these folks if they had only a month's supply of canned goods, flour, rice, beans, and water?  Just think how much less stressful their lives would be if they had a little camper stove with some stored propane, or a Deadwood Stove which could be fueled with the multitude of broken limbs from the storm.  With their stored sleeping bags, extra blankets, Dietz lanterns and Berkey water filtration systems, they could manage their situation quite well and avoid the panic that is beginning to engulf their neighbors who are waiting for Big Brother to come to their aid.
Whether this is a judgment upon our nation, or a blessing, is up to you.  You can either view this chaos as out of your control and something that someone else needs to fix, or you can thank the Lord that you have been given a vision of what you still need to do to secure your family's comfort and safety.  I'm sure there will be millions who will take on the mantle of "victim", but I'm equally positive that there will be others who will finally listen to that still small voice and be able to discern the steps they need to take.
I plan on using this as an opportunity to, first of all, pray for my country and hope that those who have been indecisive will have their eyes opened and begin to take action.  Secondly, I will evaluate my own preparation plans against what I see unfolding in New York and New Jersey and make changes, accordingly.
But the thing that has unnerved me the most was a comment PLW made this morning.  We were discussing the activities of the "sheeple", and he looked at me and said, "If I was China, Iran or North Korea, I'd be thinking, 'Yep, just one little EMP over the center of America, and we've got 'em!' " 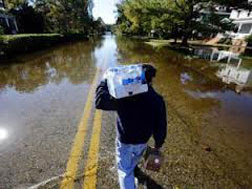 Watching the images coming out of the East Coast, it doesn't take a genius to figure out that most Americans living in big urban cities would be unable to survive the aftermath of an EMP.  They are totally unprepared to take care of themselves and have taken no steps to protect themselves or their families from starvation, lack of water or heat.
They are sitting, paralyzed by their circumstances, and waiting for the government to come rescue them.  Guess what?  There is no guarantee that anyone will be coming, and if they do, you will not be living the life you were accustomed to.
I pray that this will be the wake-up call that our nation has needed.  I realize that some will never think for themselves and will submit to martial law and even death, before they consider saving themselves.  But I'm hoping that those who have been sitting on the fence, or who have not completely bought into their partner's Prepper Plan will have the veil removed from their eyes and see the importance of having a plan in place.
Use this heart-breaking situation to plead your case.  Ask your spouse or family member to see Hurricane Sandy as a precursor to a survival situation; a harbinger of what could come.  Show them this blog post, and then pray for a change of heart.  There's still time to execute your plan!

Psalm 94:8      "Take notice, you senseless ones among the people; you fools, when will you become wise?"