How Sequestration Will Affect The Military

I am sure it will come as no surprise to you that I am extremely interested in the upcoming Sequestration.  In case, you're not exactly sure what it is, let me try to explain.  I did a lot of research, reading articles at USA Today and Christian Science Monitor, while trying to find sources that weren't politically-based or biased.  I finally decided that the National Military Family Association (NMFA) offered the most factual analysis of what Sequestration is and how it will affect our military families.  Here is their description:
The 2011 Budget Control Act (P.L. 112-25) set up a “super committee” to recommend ways to lower the budget deficit by $1.2 trillion over the next 10 years. The committee failed. The law requires $1.2 trillion in lowered spending – half from defense and half from nondefense. Lawmakers have until the end of this year to reach a deal that would avert a budget sequester. Sequestration is a mechanism built into the 2011 Budget Control Act that will trigger an automatic additional half-trillion-dollar cut to defense spending over the next 10 years if Congress doesn’t otherwise identify spending reductions. 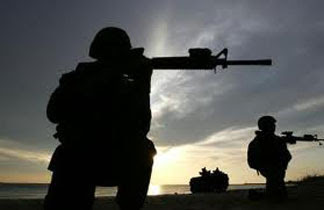 According to the law, on January 2, 2013, the President must issue an order cutting government spending by the sequestered amount. This would mean almost $55 billion from the Department of Defense (DoD) alone.
And after spending time with our Wounded Warriors, I wanted to know what kind of an impact these massive cuts in defense will have on our military.  According to a 400-page White House report,  "the cuts would result in a reduction in readiness of many non-deployed units, delays in investments in new equipment and facilities, cutbacks in equipment repairs, declines in military research and development efforts, and reductions in base services for military families."
The NMFA seems to concur, stating that DoD funds that are not committed to contracts by January 2, 2012 would be subject to sequestration, along with possible cuts to funding for war operations in Afghanistan.  But they also admit that there is a lot they don't know, because the Department of Defense has not been forthcoming on how they plan to implement Sequestration.  Some of their quite legitimate questions include:  Will all programs be cut equally across the board or will whole programs be cut?  Will there be a downsizing of personnel?  Will weapon systems be cut?  How will this affect the economy and unemployment rates?
According to The Military Times, a spokesman for the House Armed Services Committee revealed that if all programs were treated equally, every account would be cut by about 8 percent in January, 2013.  While military personnel are exempt, every defense program faces a 12 percent cut, they stated. And among the cuts will be $3.3 Billion in health care to the troops and $17 Billion to maintain and operate our nation's military services.
Of obvious concern to me is that our military, who have sacrificed so much for us, are not denied benefits that they deserve.  Cuts in health care and family services are just not acceptable!  Then there is the issue of national security.  Millions are due to be cut from Aviation security, and programs and departments that protect and secure our borders.
It is apparent to anyone with half a brain, that our nation is in deep financial trouble, and that we are going to have to suffer some pain in order to dig ourselves out of this debt debacle.  But raising taxes while cutting defense spending is not the answer!  In case anyone in the Government and the Pentagon has noticed, the Middle East is on fire, and the United States is dead center in the sights of radical extremists.  Sacrificing national security and weapons programs in favor of social entitlement programs is a path to national ruin.
Perhaps the most distressful aspect of this whole situation is the uncertainty of it all.  No one in the Government is forthcoming about details.  Which can't be good for us, right?  Is this just another "You'll just have to wait to see what is in the Bill" moment?  The readiness of our armed forces should not be in question.  Nor should their medical care or family support programs.  But the bottom line is this:  it's time for stability.  The military forces need to know how they will fight their battles; their families need to know they will be taken care of; and the citizens of this nation need to know our leaders will stop at nothing to preserve this country.  Let's pray that character and honor have not perished among our elected officials.

Proverbs 3:21     "My son, do not let wisdom and understanding out of your sight, preserve sound judgment and discretion..."