This past week, the major players involved in the world unrest were in New York to speak before the U.N. General Assembly.  They made both "official" speeches and gave formal interviews throughout the week.  We should not turn a deaf ear to their communications.  Words have meaning and significance.  Even this brief glance at some of their remarks should give us a clue towards their intentions.  Carefully consider what these leaders had to say: 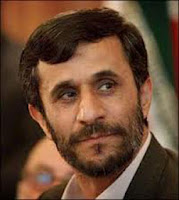 Iranian President Mahmoud Ahmadinejad:
He called for a "new world order", free of the domination of the ruling big powers.  “Muslims, Christians, Jews, Hindus” and other religions and cultures could live in harmony and peace if it weren’t for the “arrogance and hegemony of the ruling minority [and its] oppressive international order.”

Meeting with reporters before his U.N. speech, the Iranian President said Iran has been in existence for a thousand years, while the nation of Israel has only existed for 60 or 70 years.  "They (Israel) have no roots there in history."  Could he be any more wrong?  He further intimated they have no place in the Middle East and "must be eliminated."

Egyptian President Mohamed Morsi:
He called upon the U.N. to once again grant a Palestinian state and condemn Israel.  He also asked the General Assembly to consider international action to limit speech that defames religions.  In this sentiment, he was joined by the President of Yemen, who said, "There should be limits for freedom of expression, especially if such freedoms blaspheme the beliefs of nations and defame their figures."

All this "freedom of speech" rhetoric comes on the heels of the cheesy film that has been used as the scapegoat for inciting the recent violence against our Ambassador and three others in Libya.  There are starting to be rumors around the net, that this film was a set-up; the low quality suggesting that a terrorist affiliate made it for the express purpose of sparking outrage.  It will be interesting to see if this story grows legs.  If true, it provided a convenient excuse to blame the West for pre-planned protests, violence, and terrorist attacks. 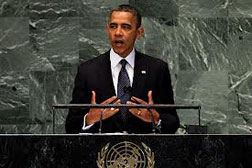 President Barack Obama:
In keeping with the "freedom of speech" theme, our President made the statement, "The laws governing the flow of information on the internet are obsolete."  What concerns me about this approach is the fact that he missed an opportunity to denounce radical Islamic terrorism in the killings of our Ambassador and security personnel; instead choosing to use this cheap film as a justification to crack down on internet speech.


The President also proclaimed, "The war in Iraq is over, and our troops have come home.  We have begun a transition in Afghanistan, and America and our allies will end our war on schedule in 2014. Al-Qaida has been weakened, and Osama bin Laden is no more. Nations have come together to lock down nuclear materials, and America and Russia are reducing our arsenals."

I am afraid I don't find great comfort in these words.  Our transition in Afghanistan finds more of our troops dying from Al-Qaida "insiders" within the ranks of the Afghan Security Forces.  In light of these events and the possibility that Al-Qaida was involved in provoking the death of Ambassador Stevens, I respectfully disagree that they are "weakened."  General John Allen (who succeeded David Petraeus as Commander, U.S. Forces Afghanistan) is publicly stating that Al-Qaida is resurging.  It's not only too early, but disingenuous, to proclaim that this terrorist organization is dwindling.
Also, the fact that Iran is continuing with their nuclear program contradicts the statement that "nations are locking down nuclear materials".  And I find no peace of mind in the thought that we would willingly reduce our number of nuclear warheads; that we would trust the Russians or anyone else to not take advantage of our vulnerability. 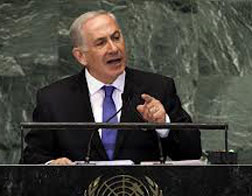 Finally, I cannot conclude this post without considering the words of Israeli Prime Minister Benjamin Netanyahu:
For those at the U.N. who refute the claim that Israel has no biblical or historical roots in the region, he said, "Three thousand years ago, King David reigned over the Jewish state in our eternal capital, Jerusalem. I say that to all those who proclaim that the Jewish state has no roots in our region and that it will soon disappear... The Jewish people have come home. We will not be uprooted again. "

He also had a message for those members of Islamic terrorism organizations:  "Forces of radical Islam...are bent on world conquest. They want to destroy Israel, Europe, America. They want to end the modern world...Their intolerance is directed first at their fellow Muslims, and then to Christians, Jews, and anyone who doesn’t submit to their unforgiving creed. It’s not whether this fanaticism will be defeated. It’s how many lives will be lost before it’s defeated."

He then confronted his nation's standoff with Iran:  "For the Ayatollahs of Iran, mutually assured destruction is not a deterrent, it’s an inducement... Ayatollah Rafsanjani said, "The use of even one nuclear bomb inside Israel will destroy everything there, however it would only do partial harm to the Islamic world."  The religious leaders of Iran are willing to sacrifice their own people to destroy Israel.

Netanyahu ended his speech with an appeal to biblical values:  "We heed the words of the Jewish prophets Isaiah, Amos, and Jeremiah to treat all with dignity and compassion, to pursue justice and cherish life and to pray and strive for peace. These are the timeless values of my people and these are the Jewish people’s greatest gift to mankind."

The people of the world need to carefully scrutinize the words of these world leaders.  They currently hold the peace and the future of the planet in their hands.  Which of these men do you trust?  Whose remarks sound like they truly want world peace?  Do their words give you confidence; provide you with assurance that they will take the world in the right direction?  There is only one word of all these remarks that resonates with me ..... and that word is "pray".   Pray for hearts to be changed; pray for evil to be defeated; pray for a desire for peace to invade the land.  That single word has so much power, and it may be the only message of hope we have.

Jeremiah 42:2-3       "Jeremiah the prophet said to him, “Please hear our petition and pray to the Lord your God for this entire remnant. For as you now see, though we were once many, now only a few are left.  Pray that the Lord your God will tell us where we should go and what we should do."