In a New York Times op-ed piece, lawyer and economist Steven Ratner opened his feature article with the bold statement, "We need death panels."  Before we explore this declaration, we need to answer the question, Who is Steven Ratner?  Mr. Ratner has a noted and distinguished resumé.  He recently served as the "Car Czar" in Barack Obama's administration; he served 20 years as an investment banker at Lehman Brothers and Morgan Stanley; he has been an economic counselor at the NY Times, writes a monthly column at the Financial Times, and is the economic analyst on MSNBC's Morning Joe.  So you would think he has his finger on the economic pulse of our country.

I guess that depends on what direction you want the country's economy to proceed.  Mr. Ratner was appointed Counselor to Secretary of Treasury, Timothy Geithner, and became the lead auto adviser in determining how to handle the insolvencies of General Motors and Chrysler.  He apparently was the man behind the plan for American taxpayers to pony up $82 billion in taxpayer "investment".  This plan ultimately resulted in the closure of 2,000 dealerships and the loss of tens of thousands of auto industry jobs.  So when this man says we need death panels, we better pay attention.  His words could result in major public policy changes.
These particular words strike fear in the hearts of every American who instinctively knows that ObamaCare includes these morally repulsive panels.  Now to be fair, Ratner softened his initial statement by saying, OK, maybe not "death panels" per se, but rather ... "rationing".  That's supposed to make us feel better???  And his article showed exactly who he has in his crosshairs ..... Medicare recipients.  Since I am officially in the Baby Boomer generation, Medicare is on the horizon.  Although it's not in my near future, if ObamaCare remains law, I will be subject to such "health care resource allocations."
Please know that I am aware that we are facing rising costs in the treatment and care of our elderly, as the Baby Boomer generation approaches their declining years.  But, as I read Mr. Ratner's opinion piece, I was flabbergasted.  He predictably chastised Paul Ryan for his plan to increase competition as a solution, while also chastising President Obama for his vague plan of creative ideas, as-yet-to-be determined innovations, and lessening reimbursements.  Because, you see, Steven Ratner thinks all this is political maneuvering, and the solution is easy and simple:  "reducing the cost of treating people in the last year of life."  He doesn't even try to sugar-coat it! 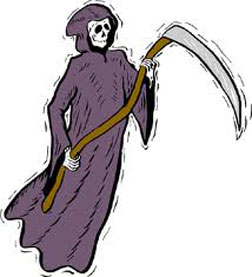 He goes on to say that yeah, yeah, he knows it's hard to lose an aging parent.  But it's simply not cost-effective to try every treatment available, regardless of the cost or success rate; especially since these procedures cost Medicare more than a quarter of the program’s budget.  It imposes such a huge cost on society, and well .... Grandma just isn't worth it.  And besides, other countries have already adopted systems that ration care, so why shouldn't we?  He even quotes some program in Great Britain that came up with a "quality-adjusted life year system" that puts a price on the health care costs of sustaining that last year of Grandma's life ---- $48,000.
It's all about numbers for Steven Ratner.  The acceptable number of 79,000,000 Baby Boomers equals increased costs of medical care as they age; and if you can eliminate that last costly year of their lives, why, just think how many $48,000 drains on the system can be avoided?  According to Ratner, these Death/Advisory Panels should at least be able to "recommend" changes in the cost or services available.  Interpret that to mean a big fat "NO!" to end-of-life options.
I just can't wrap my head around how one man can cultivate a philosophy that promotes such disdain for our aging population.  It's irreverent, disrespectful and godless.  And I would venture to guess that godlessness is probably at the root of this man's reasoning.  It's the only thing that makes sense.  If one has asked God into his heart, it is unthinkable to put a price on a life.  And that's what this is; reducing each of us down to dollars and cents.
The last sentence of Mr. Ratner's article says, "We may shrink from such stomach-wrenching choices, but they are inescapable."  Mr. Ratner, I doubt that you include yourself in the masses that you so indifferently condemn to sub-standard care, but I pray that men like you could somehow learn that mankind is not in control of their own destiny.  There is Someone else who is in charge of every minute we are here on this earth.  And while, you, Sir, may have power over the institutions that govern our care, and you may be able to determine if I receive a procedure that could prolong my life, I am grateful that you will never have command in the next life .... this existence is temporary, and eternity awaits me.

Ecclesiastes 3:10-12       "I have seen the burden God has laid on the human race.  He has made everything beautiful in its time. He has also set eternity in the human heart; yet no one can fathom what God has done from beginning to end.  I know that there is nothing better for people than to be happy and to do good while they live."
Posted by Pam Kohler at 7:00 AM