The Empire Killer: The Price Is Becoming Too High

The Khyber Pass, the Hindu Kush, Kandahar, Kabul and the Taliban .... all part of our lexicon due to a decades-long war in a country where war is almost part of their cultural identity.  Afghanistan has fought some of the greatest military powers in the history of the world.  Throughout its centuries of existence it has been conquered by Darius I of Persia (ca. 500 BC), Alexander the Great (330 BC), and the Mauryan Empire (part of modern-day India).  The Islamic conquest in 642 AD met with fierce resistance from the various mountainous tribes, as did the Mongols and different Persian and Indian empires in the Modern Era.  Nothing changed when the British and the Russians tried to subdue the peoples of this vast and difficult terrain.
I admit that the intricacies of inter-tribal relationships and control are too complex for this ordinary citizen to comprehend.  But I am not so simple-minded that I cannot recognize when our nation should re-evaluate our war policy.  If you are paying even the least bit of attention, you are aware that our soldiers in Afghanistan are coming under ever-increasing attacks by so-called "insiders" - supposed members of the Afghan National Security Forces (ANSF) which are partnering with coalition forces to defend their country.   In fact, two more heroes lost their lives this weekend.  My first thought is, "Why aren't we doing a better job of screening these insiders?" and "What are we doing to protect our military?"
I was recently directed by a faithful reader of this blog to a website that I highly recommend.  It is called Michael Yon Online Magazine.  According to his website bio, "Michael Yon is a former Green Beret, who has been writing from Iraq and Afghanistan since December 2004.  No other writer has spent as much time with combat troops in these two wars.  Michael’s dispatches from the frontlines have earned him the reputation as the premier independent combat journalist of his generation."   Who better to give us the truth from our soldiers' perspective, right?
With that in mind, I want you to read portions of a post from last week.  Michael prints a letter from a son stationed in Afghanistan to his father.  Michael confirmed the authenticity of the letter, and published it with permission:

I am fed up. I cannot believe the lack of attention the recent changes in this war is receiving by the media or the country. I think I saw one thing on CNN about the following subject, but I had to dig extensively to find it. The purpose of this letter is to let you know of the garbage that our soldiers are going through right now. With this knowledge, I hope that you take action by writing your congressmen.

First, because of the recent green on blue incidents or "insider threats" as the new buzz phrase dictates, all coalition forces in Afghanistan have completely stopped partnering with the ANA, AUP, and ALP in order to prevent the death of anymore CF casualties by ANSF or Taliban disguised as them. This is also greatly spurred by President Karzi's indifferent attitude and lack of action to take measures to prevent further insider attacks.


Our mission in Afghanistan is to partner with the ANSF on all levels. Now the policy makers are telling us that we are not allowed to do that and further more we are to take immediate measures to secure ourselves from the ANSF that are co-located with us. So the question now becomes, what is our mission? Furthermore, the implication is that we have absolutely no reason to still be in this country if we are not partnering with the ANSF. So why are we here? 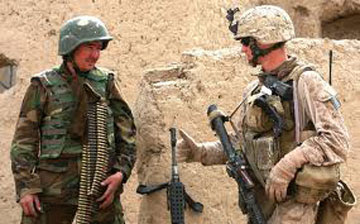 I don't think that the American citizens would be happy if they knew that their soldiers were being prohibited from defending themselves in any way because of politically driven orders, but that is precisely what is happening in this war right now even as I write this letter. The soldiers of the U.S. never engage the enemy unless we know that we always have the tactical advantage in defending ourselves; that advantage is the use of close air support and air weapons team. To take those weapons away from us is to level the playing field for the enemy and thus exposing our soldiers to more danger. In the school house they teach us that the minimum ratio that we are to engage the enemy with, is a 3:1 ratio. In other words, we have the highest probability of winning because we don’t fight fair. The sound tactical principles behind this teaching have saved lives. The very presence of aircraft over our foot patrols has also saved lives and now our chain of command is being told by our political leadership that this is now not allowed.  If we are not partnering with the ANSF and we are not actively patrolling to prevent our enemies from massing their attacks on our COP and we can’t drop a bomb on the enemy that we have positively identified, than what the hell are we doing here?

Give us a mission or send us home. I honestly have no preference on what the politicians decide, as long as they just make a decision. Of course this will be a terrible inconvenience on the current elections so I am sure we will be forgotten, which really does not seem to be too different for how things have been going for the last eleven years.


Do not buy into what some media outlets have already said about this. Casually saying that this is a frequent occurrence is false, and is an attempt to downplay the major ramifications for these decisions. We have never been so restricted in defending ourselves as we are now. This is not just a stand down. The other implication of this decision is that we will perhaps never regain our relationship with the ANA after we have executed these measures to protect ourselves from them.  Essentially, we have left them to die as we watch from our high-tech cameras and UAVs. They will not forget this and I fear the relationship will never be the same.

I love you very much Dad and I don’t want you to worry about me any more than you already are, but I also know that this has to be brought up, someone has to say something about this. It is wrong to keep this hidden away while American soldiers are under constant threat of death and dying.  I don’t care if you send this letter directly, this needs to be known.

So my question to you, is what are you going to do?  This brave soldier asked his father to contact his congressman.  Can you do no less?  When we have a professor at the Thomas Jefferson School of Law stating that the U.S. can only conduct the war according to a UN charter, and "Under the charter, a country can use armed force against another country only in self-defense or when the Security Council approves."  So now our soldiers are also under the command of the UN Security Council?!?!
The United States of America has the finest and strongest military in the world, yet we hamstring our soldiers and subject them to ridiculous rules of engagement that needlessly send them home in body bags!  If you are not going to let them do the job they are trained for, then I agree with this young man .... Why are they there?  What exactly is their mission?
I implore each of you to search your conscience and give this some serious thought.  Our soldiers dedicate their lives to defending us.  We owe them so much; and we can start by doing everything we can to make sure they are given every means and opportunity to fight this war to WIN IT!  If that is not the goal or the mission, then it's time to leave the battlefield.
To sacrifice not only the lives of our boys, but the lives of the Afghani Security Forces who trusted our promises to train them to help protect their country is dishonorable and unprincipled; unworthy of what America stands for.   My heart breaks for this soldier and his brave comrades.

1 Chronicles 12:17       [The Words of King David]:   “If you have come to me in peace to help me, I am ready for you to join me. But if you have come to betray me to my enemies when my hands are free from violence, may the God of our ancestors see it and judge you.”