BEWARE: Is Your Child's School Celebrating "Mix It Up" Day? 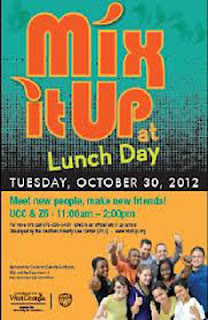 I stumbled across this bit of news on wnd.com.  Apparently, the Southern Poverty Law Center is sponsoring "Mix It Up Day", a nationwide campaign directed at grades K-12, which encourages students to "hang out with someone they normally might not speak to."  Schools all over the country are encouraged to participate, and the target date is just a couple of weeks away; October 30th, to be exact.

In case you are unaware of the SPLC, they are a well-known progressive group, who according to their own website, "is a nonprofit civil rights organization dedicated to fighting hate and bigotry, and to seeking justice for the most vulnerable members of society."  Fighting hate and bigotry?  I'm all for that!   And learning to accept each other for our differences?  I'm OK with that, too ..... as long as acceptance of differences goes both ways; acceptance does not mean a departure from my principles and belief system; and acceptance is not demanded --- all positions I am willing to extend to an opposing viewpoint.  And that's where the objectives of this little campaign set off warning bells.
While promoters of the program say it is designed to "break down barriers and curb bullying", many family and religious-oriented groups are concerned that "Mix It Up Day" is a cover for pushing the gay agenda in our schools.  Before I'm accused of jumping on the hysteria bandwagon, let me tell you why I am not discounting this possibility.
To begin with, I have a niece who attends a large public high school in a major city in the Southwest.  I was shocked to learn that their school has set aside classrooms where gay and lesbian couples can go to "show affection" to each other; where they could feel comfortable in exhibiting their homosexuality, since they supposedly feel ostracized by the balance of the student body.  When I asked if there was such a room set aside for heterosexual couples, the answer was "of course not."  So please don't tell me that it is too far-fetched to imagine that "breaking down barriers" won't include sexual orientation.  And, according to the American Family Association, the "anti-bullying" aspect of the program has often been used "as a mechanism for punishing Christian students who believe that homosexual behavior is not something that should be normalized."  Would it surprise you to learn that the SPLC has proclaimed the AFA "a hate group", right up there with neo-Nazis and those who deny the Holocaust?
While I admire the American Family Association's opinion, I wanted to make my own decision, so I dug a little deeper into some of the "activities" suggested for "Mix It Up Day."  The SPLC offers free "tool kits" for teachers and schools who want to participate.  While, on the surface, many of the proposed subjects seem to discuss the diversity among races, genders, and different cultures, it is wise to look past the facade.  The following are just a couple of their lesson plans for "teaching tolerance." Decide their agenda for yourself.
Stay "In The Mix" For Valentine's Day: For levels Pre-K through 8th grade.  They begin by telling the supposed origin of "Valentine's Day"; something about a 3rd century Roman emperor banning married soldiers in his army, so a man named Valentine began performing secret marriages.  Lesson to be learned:  Students must resist this legacy of restricted love.  Topic for Discussion:  "Injustices routinely occur during Valentine's Day -- moments of exclusion and ostracism, assumptions of a heterosexual norm."  Facilitators then share two stories of students addressing such injustices.
Another "tool kit" was called Controversial Topics:  The motive for this interaction is supposedly because "Students always have passionate opinions about controversial social topics."  The stated objectives of the exercise are as follows:  1) Students will debate a controversial topic with grace and dignity  2)  Students will practice disagreeing by using the “Disagree with Grace” statements, such as That's a really good point and I feel/think differently ....  Can you tell me more about what you meant when you said ....  3) Students will make friends across ideological boundaries. 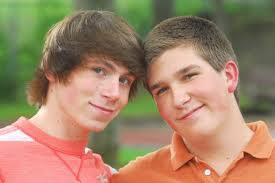 As I'm reading this "tool kit", I'm thinking, "OK, this sounds likes it could be fair and balanced; a way for kids to respectfully discuss their differences." Then I read the "Controversial Topics" handout!  There was only one topic, and guess what it was?  The topic was .... are you ready? ..... the statement "You're so gay."  Can the SPLC be any more transparent?  Is this the only and best controversial topic they could come up with?
They further insult our intelligence by how the moderator is to handle the discussion.  On one side are those who think this statement is fine, and their reasons are presented as shallow and simplistic:  1)  We don’t mean anything by it.  It just means “stupid” or “dumb.”  2) Being gay is wrong.  3)  Gay men are effeminate.  4)  Being gay is a sin.
On the other side of the balance sheet are those who think this statement is wrong, and their reasoning is presented as emotional, sophisticated and intelligent:  1)  It is bullying.  2)  There is nothing wrong with being gay in the same way that there’s nothing wrong with being heterosexual.  3)  It’s hurtful to people.  4)  Sometimes if people aren’t really masculine or feminine they get called gay and they aren’t.  5)  A ‘faggot’ literally means a stick for kindling and it’s used to denigrate gays and lesbian because in medieval times they used to use gay men as kindling to burn women accused of witchcraft.  (Can you believe they want teachers to teach this crap?!?!)  6)  “Gay men are effeminate” is a stereotype. Plenty of gay men are not and plenty of heterosexual men are. There is no such thing as a typical gay or lesbian person.  7)  Gay people believe they are born gay, that it isn’t a choice. Therefore, it’s not a sin.
So, let's see, who sounds like the enlightened, twenty-first century, inclusive lover of humanity ---- and who sounds like the ignorant, exclusive hater?  Does it really surprise you?  Then as I read further and saw how this lesson was to be implemented, I almost laughed out loud!  Although students were encouraged to discuss the topic kindly and respectfully and not put down another's opinion, they were also to read the topic sentence (You're so gay) silently for 5 minutes, and then tell how they felt after reading the different arguments.  Now, who among these children, is going to want to adopt any position but the one SPLC is promoting?
As if that's not enough to silence any opposing opinion, the teacher is to end the discussion with a  follow-up; they are to share with students articles on school-age children who have recently been killed or taken their own lives because of anti-gay bias in schools.  This is emotional blackmail!
I'm sorry, but this is nothing less than propaganda and outright bullying itself!  It is not only promoting a homosexual agenda, but an anti-Christian message.  I have gone on record on this blog as saying it is not my place to judge others' sexual orientation.  There are people that I love that have chosen this lifestyle.  We mutually respect each other's position and choose to be tolerant and accepting of our differences.  But I will not sit by as this agenda is forced on our children through the tax-payer funded public school system, and without the consent of parents.
Once made aware of what is planned for October 30th, many parents have objected and the "Mix It Up" agenda has been pulled from their school's calendar.  So I invite you to investigate for yourself.  Read the article on World Net Daily, and check out the different activity topics that are available to teachers.  Do you approve?  Do you think it will be fair to your child or champion your beliefs?  We must be vigilant.  It's all about labels, and it is easy to be labeled hateful and bigoted.  If we do not stand up for our Biblical tenets and principles, our children will soon label these truths irrelevant.  The wolf is at the door!

Matthew 7: 14-16      "But small is the gate and narrow the road that leads to life, and only a few find it.  Watch out for false prophets. They come to you in sheep’s clothing, but inwardly they are ferocious wolves.  By their fruit you will recognize them. Do people pick grapes from thornbushes, or figs from thistles?"