IMPORTANT INFO! Smart Meters Are Coming To Your Neighborhood!

For awhile now, I have been concerned about the installation of "Smart Meters".  What are they?  One of the best explanations I've seen was on the website, earthcalm.com, a site that monitors the dangers from electronic and magnetic fields.  Their definition reads:  "Smart Meters are electric and gas meter reading devices being installed all over the US as a first step in creating a national smart grid. Designed to enhance energy efficiency and make widespread adoption of renewable energy easier, Smart Meters are radio transmitters that communicate data from homes and businesses to the gas and electric company through a matrix of radio signals. They allow people [and eventually, the government] to measure and monitor their own energy consumption in order to reduce it."  In other words, we are supposed to hale the advent of these new devices as a way to monitor and reduce our energy costs, while saving the planet. 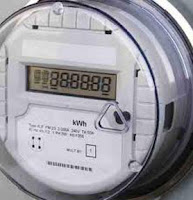 You want the truth?  They are part of the U.N.'s "sustainable development" and Agenda 21 plan of action.  The installation of these meters is being mandated across the nation by the federal government, and stimulus money is providing the funding.  However, one finds out that the law asking for smart meters and a smart grid, (Energy Policy Act of 2005), only mandates the utilities to "offer" the meters and to install them "upon customer request.” The choice is still supposed to be ours.  However, what I am about to tell you will show that we are being offered no choice at all!
In case you think I am just responding to my normal conspiracy bias, let me tell you what I encountered just yesterday.  I noticed the Grid One company truck entering my property and the meter reader approaching my utility pole.  I met him at the pole and asked why they were no longer reading the meter from the highway.  The utility representative could barely speak English (that's another issue I could speak to!), and was only able to tell me that "Next year, everyone will get Smart Meters."  I tried to question him further, but he had no answers.  Now my radar was up!
I went to the internet and started doing my research, and I was astonished to find that citizen activists all over the nation are fighting the forced installation of these so-called "smart growth" energy devices.  There are areas of the country that are under assault; their rights are being violated as older analog meters are removed and they are forced to accept the new Smart Meters.  With a smart meter on your home or property, your kilowatt hours will be billed at different rates during different times of the day.  Mary Hendry, of Lakeland, FL wrote in an article, "“Basically, you can't cook, bathe, run the washer or dryer, have heat or air conditioning until after 9 at night, or you are spending too much on electricity. If a mom is trying to keep the electric bill down, I see her bedtime being around 2 a.m. most nights.”  She explains that with her utility company, the three main time categories are on-peak, mid-peak and off-peak....  and peak time is almost twice as expensive as off-peak."
And what we're not being told is the harm to our health from these "smart" devices.  Hendry's article goes on to tell us, "There are already hundreds of thousands of cases against various utility companies because of the deleterious health effects of smart meters.  The symptoms and illnesses range from nausea, vomiting and tinnitus to heart arrhythmia and cancer due to the radio frequency waves and electromagnetic frequency they emit.  In fact, studies done on the same kind of waves emitted by smart meters show them to be equal to a level two carcinogenic."  And earthcalm.com has a very informative article stating all their research on the health risks of the smart meters. 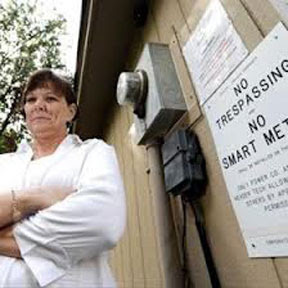 Citizens across the country are rightfully concerned and up in arms over this violation to our Constitutional rights.  In one case, in Houston, TX, a citizen literally had to protect herself from a Utility Company enforcer.  Thelma Taormina was home the day the utility company tried to install a smart meter.  An article at newamerican.com describes the encounter experienced by the 912 Project activist.  When the public-utility subcontractor showed up to install the meter, Thelma informed him she didn't want it; that he was trespassing on her property, and she asked him to leave.  He refused.  Words were exchanged.  He called his supervisor; she called her husband.  He was asked to leave several more times; he continued to refuse and to install the meter.  Their encounter escalated and the subcontractor shoved her.  She put her hand on the meter to stop him, and more shoving ensued.  He threatened to call the police, and then suggested she do it, because he would be through installing the device by the time they arrived.  She had enough.  She felt threatened by his physical actions, and he refused to leave her property when asked.  So being a Concealed Carry Permit holder, she gained access to her gun and asked him to leave again.  This time he complied.
This story has made national headlines, and according to Thelma, been sensationalized by all the Second Amendment haters.  The subcontractor did call the police in the hopes of filing assault charges.  They came, questioned Thelma, and determined that no charges would be filed.  The man was trespassing and did not leave when requested.  So for the time being, Thelma is through with the incident.  (Some personal advice?  Next time, Thelma, you should be the first one to call the police.  You were the victim, and by delaying, you made the utility employee look like the victim.)  So while Thelma still does not have a smart meter, the Public Utility is still considering the pursuit of legal action..... some nonsense about being "troubled that someone would pull a gun on an employee trying to do their job." Although Thelma was successful in resisting the installation of her Smart Meter, over 2,000,000 have been installed in the Houston area.... even though Texas state law does not mandate the meters.
So my question to you is this:  Do you know where your public utility stands on this issue?  What are your state laws?  Do you know the steps to resist the installation should you decide to opt out?  Do your research!  This is not just happening in Texas or Florida or California.  It is nationwide!  Don't fall for the propaganda.  This is more than the advancement of technology; it is Big Brother and the U.N. controlling how we live our lives.  Be informed and take your stand!

Colossians 1:28-29      "Him we preach and proclaim, warning and admonishing everyone and instructing everyone in all wisdom, that we may present every person mature in Christ. For this I labor, striving with all the superhuman energy which He so mightily enkindles and works within me."
Posted by Pam Kohler at 7:00 AM