What's In A Name?

By now I'm sure you have all heard the news story about the three-year-old in Grand Island, Nebraska who was accused of violating Grand Island's "Weapons in Schools" Board Policy 8470, which forbids "any instrument...that looks like a weapon."  This is a clear cut case of some overzealous school official who doesn't have the sense God gave them.  Let me give you the facts:  little Hunter Spanjer is deaf.  So when he signs his name .... well, you guessed it .... some academic wonk was offended.  And in case you didn't know, a wonk is described as "a person who takes an excessive interest in the minor details of a political policy."

And don't be mistaken, this school official's reaction was definitely political.  And overboard!  You can image what his name sign would look like, and the school even went so far as to suggest that Hunter would have to change how he signed his name, because his fingers are now considered an "instrument that looks like a weapon." 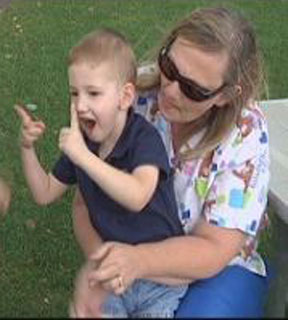 Of course it is obvious to any sane person that Hunter's identity is distinctive and individual, just as his name gesture is uniquely his own.  How anyone on that School Board could view a little boy signing his name as threatening or menacing, is beyond me; let alone suggest that he has to change the way he signs his name.  This is just one more case of Political Correctness out of control.
As public indignation rose over this story, the School Board has insisted that they never asked the child to change his name and the story is blown out of proportion.  Yet the Marketing and Communications Coordinator is quoted as saying the name gesture was "not an appropriate thing to do in school."  It seems as if school officials don't want the negative publicity that has accompanied this story and resulted in thousands of emails and calls in support of Hunter and his parents.  Yet they still want to go on record as discrediting how this child signs his name; all for the sake of a political issue.
Hunter should be allowed to sign his name, and be given the dignity and approval he is due.  This is no more of an issue of "school safety" or a "weapon in school" than a child named Angel would be signing religious doctrine on the playground.  But then my example is not too far-fetched, is it?  We have become a culture that is too easily offended over what makes us unique, distinctive and remarkable -- what makes each of us an individual and a special, one-of-a-kind child of God.
All of our silly policies and rules are stripping away our "differentness" in an attempt to make us uniform and indistinguishable; an effort to make us all equal in our "unremarkableness".  Take God out of the schools and children won't hear that we each have a special purpose; are special in the eyes of our Lord, who has great expectations for each one of us.  Take God out of our town squares, and you see a society that no longer values or respects their neighbor; it's each man for himself and true compassion and kindness are replaced with discrimination and prejudice.  Take God out of our institutions of government and you get repression, tyranny and injustice.
You might think I am taking my opinion to the extreme, but can you see how we've let this get out of hand?  Can you imagine the issue of little Hunter's name gesture even being considered 30 or 40 years ago?  Little boys have pointed their fingers and made the sound of guns since the most primitive form of a gun was invented in 12th century China.  So can we get a grip?  Hunter's name has great significance and character; it represents one of man's earliest duties and responsibilities.  Shame on those school administrators for even thinking that he should change how he signifies his name to suit their biases.  A name is the blueprint of who we become, and little Hunter deserves to become all he was designed to be.