The End Of An Era: Tribute to Neil Armstrong

Forgive me for ignoring the fact that it is Labor Day, but I think it is much more important to honor a man whose bravery and humility represent American virtues, than to give you an exposé on a holiday that has its origin in the union and labor movement.
I would venture to guess that any Baby Boomer can tell you exactly where they were on July 20th, 1969.  I know I can.  I remember sitting in the back seat of our family station wagon, as my father drove us to our habitual Sunday afternoon trip to the ice cream shoppe.  We were discussing the seriousness of what would happen later that evening; the magnitude of this event for the United States.  And then, with millions around the world, we watched Neil Alden Armstrong take that momentous and historic step on the moon. 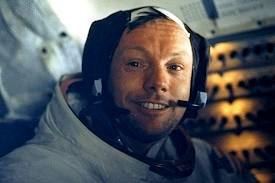 And with Mr. Armstrong's passing last week, we have seen the end of an era.  He symbolized so much of what America stands for.  And he accomplished so much more than what is attributed to him.  He rightfully deserves all the accolades for being the first man to walk on the moon.  No one can take that away from him, and all that it represents.  America had answered the challenge of President John F. Kennedy, who stated in 1961, that by the end of the decade America should strive to put a man on the moon.  The Soviets already had a head start, but JFK urged the U.S. to work diligently to lead the achievements of space travel because "in many ways [it] may hold the key to our future on earth."
That was a time when America was bold and wanted to be a leader.  And there were men like Neil Armstrong who had the courage and the spirit to take us there.  He never saw himself as a hero; in fact, he shunned that title.  But after I did some research on his life story, I can call him nothing less.
He was always a team player, where other men might have capitalized on their fame.  Never one to take all the glory, he often said that he "merely piloted a mission made possible by thousands of others." What he was really proud of was the inspiration that the space program and NASA gave to young children.  In a recent interview he stated, ""NASA has been one of the most successful public investments in motivating students to do well and achieve all they can achieve."  And he lamented that the federal government had gutted NASA's budget.  He always felt that NASA contributed so much more than rockets flying to the moon.  As evidence of that, 14-year-old Shane DiGiovanna, an aspiring aerospace engineer with a rare skin tissue disease, and a recipient of a Neil Armstrong New Frontiers Initiative at Cincinnati Children's Hospital, was invited to the private funeral service.  Shane is able to hear with a cochlear implant, a device developed by a NASA scientist.
Always interested in encouraging the youth of our nation, Armstrong wrote a 4-page letter to the child of a friend in the summer of 2008.  Among his inspiring words are the following:

There is much uncertainty to life.  Good health may be taken away from you without warning.  Material possessions may be lost due to circumstances beyond your control.  The one thing that cannot be taken from you without your consent, is your character, which includes your beliefs, your ethics and your principles.  So guard them with care.  They are your most valuable possessions.
The 21st century has much promise.  Remarkable things may be created and achieved.  And each of you will have the opportunity to play a role in achieving and creating a better world.  I know you will try.  Good luck!!  I wish I had your future.

These are the words of an exceptional human being who was so much more than the iconic First Man To Walk On The Moon. As a young man, he became an Eagle Scout and secured his pilot's license at the age of 15, even before getting his drivers license. He was a first-rate Navy pilot, completing nearly 80 combat missions in the Korean War, all before he was 22.  He was among the best of the famous Navy test pilots, and over his career, he flew more than 200 different models of aircraft.  But, for me, Neil Armstrong's legacy is significantly more than that of a pilot. 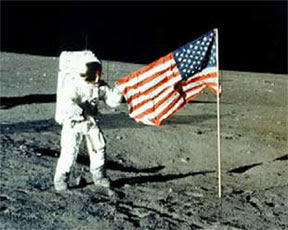 He was a man of conviction and honor.  And he was a man of faith.  Among his transmissions from the moon is the following:  "This is the Lunar Module pilot. I'd like to take this opportunity to ask every person listening in, whoever and wherever they may be, to pause for a moment and contemplate the events of the past few hours and to give thanks in his or her own way."  What many did not know, until years later, was that Armstrong then took communion privately.
During these years, NASA was still fighting a lawsuit brought by atheist Madalyn Murray O'Hair (who had objected to the Apollo 8 crew reading from the Book of Genesis) demanding that their astronauts refrain from religious activities while in space.  (Can you imagine the nerve of this offensive woman?  Wasn't the earth enough for her?  Now she wanted to force her godless philosophy on the heavens, as well?)  So, Aldrin, in his usual unassuming manner, just chose to refrain from mentioning his plan.  He kept his objective quiet (not even mentioning it to his wife) and did not reveal it publicly for several years.  Being an elder at his Presbyterian Church, Communion was an important event in his faith life, and he chose to glorify his Lord among the heavens He created.   Picturing that event in my mind is almost too emotional to contemplate.  God must have been so pleased with this man!  And now the Presbyterian Church in Webster, Texas possesses the chalice used on the Moon and commemorates the event each year on the Sunday closest to July 20.
When Neil Armstrong took his leave of the moon, he left behind a plaque with this inscription: Here Men From The Planet Earth First Set Foot Upon the Moon, July 1969 A.D.  We Came in Peace For All Mankind.  No other exploration team in the history of the world can make the claim that peace for all mankind was their goal.
And when Neil Armstrong took his leave of this earth, he left behind a legacy of reaching for the stars.  In a 1994 speech, he said, "There are places to go beyond belief."  And now, over 40 years later, Mr. Armstrong, your journey still inspires every man, woman and child on earth.  Because of your belief in your God, your belief in the ingenuity of your fellow man, and your belief in the adventurous spirit of America, your last flight has taken you into the very presence of the Creator of the Universe.  We, here on earth, mourn heaven's gain, and the stars shine just a little brighter.

Psalm 8:3-4       "When I consider your heavens, the work of your fingers, the moon and the stars, which you have set in place, what is mankind that you are mindful of them, human beings that you care for them?"