What Do You Say?

I have a young neighbor, and it is to him that I am writing this morning.  For the purposes of this post, I will call him Young American (YA).  He is exceptionally bright, creative, and having been home-schooled, he is more aware of the state of our world than your average Generation Y-er.  That's both good and bad.
It's good because YA has his eyes wide open and knows what is at stake.  He actually studies American history and understands our current economic schemes and why they won't work.  He could teach a thing or two to the executives at the Federal Reserve.  It's bad for exactly the same reason ..... his eyes are wide open and he knows what is at stake.  It's his future.
This young man is worried.  On the verge of manhood, he's asking his parents, "Am I going to get to go to college?  Am I going to have a future or a family?"  If you are his parent, what do you say?  What can you say?  He deserves more than the cliché answers.  He deserves the truth, as much as we know it.  He is entitled to our honesty and our candidness. 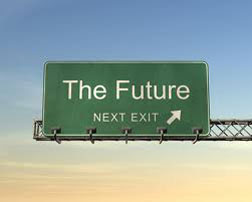 The first thing I would tell him is that his apprehension is warranted.  Even we adults don't feel secure  and don't know what direction to take.  But does that mean we give in to our fears or our anxieties?  No!  We recognize that our ideas of what to expect in the future have changed.  We know that we are headed into uncharted waters and it is up to us to create a "new normal".  His expectations of college, a career, a nice home in the suburbs, and a comfortable retirement just may become the vision of past generations.  He may need to re-define what his "future" looks like.  But he must have courage and be willing to forge a brave new destiny for himself.
He won't want to hear it, but he is not the first American generation on the verge of manhood who had to face such uncertainty.  He is akin to the young planter, who just prior to the Revolutionary War, questioned why his world was turning upside down.  Even his identity was changing.  He was comfortable as an Englishman.  What did being "an American" mean, and would his life ever be the same?
YA's circumstances are comparable to the young farmer in the days before the Civil War.  How could he even comprehend brother fighting against brother?  Father against son?  Would they ever plant another spring crop or see another harvest? Would their family farm even remain their own?  What would his future look like?  And more importantly, what would his country look like?
I can give him a little advice from my own family's experience.  My father was a 17-year-old, just like YA, when Pearl Harbor shattered my Dad's expectations for his future.  He, too, thought his fate would be the same as generations before him ... graduating high school, attending college, settling into domestic life with a wife and family.  That was abruptly halted on that tragic December 7th.
Other young men have walked that same path.  The jungles of Viet Nam, and the mountains of Afghanistan have interrupted their life plans.  Each of them wanted to strike out on their own in search of fortune and fame, so to speak; at least to have the luxury to make of their life what they wanted.  But the world intervened and changed their direction.
I believe that these examples have something to offer YA.  Their stories are no different than his own.  They faced an uncertain future and no one could tell them what lay ahead.  But they each rose to the occasion; I'm sure with much trepidation and doubt.  After all, they hadn't had any part in bringing about these events in history.  It was just a case of being born at that particular time.  But here's what I want YA to think about:  each of these young men didn't curse or question their fate, and through their decisions and actions, this country emerged from those turbulent times a better place.
And because I happen to know that YA is a faithful Christian, I want him to understand that it is no coincidence that he was born for this time.  Our God knows every hair on his head, and has a purpose for his life.  It may not be the same as YA had pictured for himself, but God will use him in unimaginable ways; for the betterment of this world and for His glory.  So I pray that YA will see hope and encouragement in whatever lies ahead.  I want him to look expectantly for what God has planned for him.  It might even be greater than anything he's dreamed of!

Jeremiah 29:11     "For I know the plans I have for you," declares the Lord, "plans to prosper you and not to harm you, plans to give you hope and a future."