Did You Miss The Latest Executive Order?

If you are politically minded, you might have been watching Mitt Romney's acceptance speech last Thursday night.  Or if politics and the Republicans aren't your thing, then you could have been involved in any number of family, entertainment, or recreational pastimes.  But chances are, none of you knew that another Presidential Executive Order had been issued.  This one is called Accelerating Investment in Industrial Energy Efficiency.
Before we even begin tackling what this EO means for "we the people", let's take a look at the opening sentence of the official White House statement:  "By the authority vested in me as President by the Constitution and the laws of the United States of America, and in order to promote American manufacturing by helping to facilitate investments in energy efficiency at industrial facilities, it is hereby ordered as follows"....
OK, I know I've tipped my hand, but anybody else notice that this statement is not exactly accurate? First of all, the Constitution does not give the President of the United States authority to bypass Congress in ordering any initiatives!  And if you actually read the Executive Order, you will find an awful lot of language that "encourages" development, adoption and investment to expand the use of combined heat and power (CHP) facilities, which generate thermal and generating power in a single process. 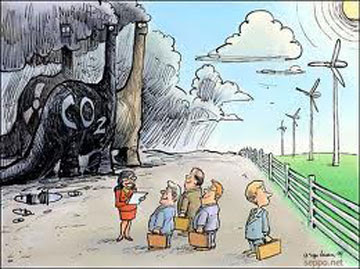 The idea behind this EO is supposedly to urge cleaner and more efficient energy production in this country.  Now, what's wrong with that?  We'd all like cleaner air and lower costs, right?  But what is hidden in the phrasing and the intent of this Executive Order is that there has been considerable opposition to climate change legislation (which used to be known as global warming; until it had to be changed to global cooling).  In other words, the government is frustrated that it has not been able to pass legislation in a legitimate, Constitutional manner, so according to the language in the EO, The Federal Government has limited but important authorities to overcome these barriers, and our efforts to support investment in industrial energy efficiency and CHP should involve coordinated engagement with a broad set of stakeholders, including States, manufacturers, utilities, and others.
What we are being told is that this order (remember, it is not legislation) will save energy users $10 billion per year, result in $40 to $80 billion in new capital investment in manufacturing and other facilities that would create American jobs, and would reduce emissions equivalent to 25 million cars.  What it really means is that the order dictates that the Departments of Energy, Commerce, and Agriculture, and the Environmental Protection Agency coordinate their actions to provide “policy and technical assistance” to states in order to ensure energy efficiency targets are being met.
As you know, I am highly skeptical of the significance of "green jobs" and the "green industry", in general.  Has everyone forgotten Solyndra?  They always promise an abundance of jobs and a great return on the investment, but the underlying facts are that this mandate from the highest office in the land will create HUGE expenditures by utilities and energy companies to change the way they process energy.  And guess who those costs are going to be passed on to?  Does anyone really think that city and state utilities (let alone the consumer!) can afford these changes at this time?  And they only have eight years to accomplish it!
No one will argue that we need to do things better; more effectively and efficiently to accommodate our changing way of life and our growing population.  But to usurp the rights and the powers of the individual states by "encouraging" that they comply with the EPA is not my idea of the best solution.
And if this isn't enough to make your skin crawl, there is another small line tucked away in the midst of all the technicalities of the EO.  It says the purpose of the order is "to encourage efforts to accelerate investment in industrial energy efficiency by improving the usefulness of Federal data collection and analysis.   So you think that rolling brown-outs and black-outs are a nuisance now.  Just wait until the Federal Government collects the data that allows them to determine if your State (or you!) have used too much energy.
The message is clear:  if the "Green Industries" can't get legislation passed the Constitutional way, then they will go around this "barrier" anyway they can as they seek to expand participation, whether we like it or not.  Utilities will be told how to process energy, households will be limited to established levels of consumption, and there will be many more Solyndras.  "Lights out" is an inevitable reality.

Psalm 90:8     "You have set our iniquities before you, our secret sins in the light of your presence. "