An Answer For Your College-Aged Kids

A pastor in our small Southern town shared this story with me .... A Baby Boomer dad felt he was just not reaching his Generation Y son.  Each time the college sophomore came home during a school break or holiday, they had heated discussions on the topic of the day.  They just couldn't seem to find common ground on subjects such as increasing taxes on the rich, social justice and same-sex marriage.
The college professors seemed to have indoctrinated his son with a foreign ideology.  Not only was the father concerned that American history was being revised; but he just could not support the theories his son was being asked to accept.  He knew the problem was twofold.  First, our universities have been infiltrated with uncompromising and dogmatic academics who slant their teachings to reflect their partisan political views.  Secondly, his son's generation has no real perspective.  By that, he knew that the technology explosion that brought them iPhones, Facebook, and perpetual texting kept them focused on the here and now, and on themselves.  They don't know that this Recession that affects their future is not the first time such an economic event has happened.  They don't know that history repeats itself, and that history is important.  It is important to know the Principles upon which this country was founded, and it is important to seek out the truth about our history.  The advent of computers had allowed his son to gain instant knowledge on any subject.  But knowledge does not always mean one has wisdom.
So, with Thanksgiving looming just days away, Dad almost dreaded the heated disagreements that he knew were coming.  How could he reach his son?  He needed to find a way to illustrate why the policies and the direction our nation was headed were not working.  Words were just words, and the professors had taught his son how to counter-argue every point he tried to make.  He needed a simple story; almost a parable, like Jesus used to get his deeper meanings across to the disciples. 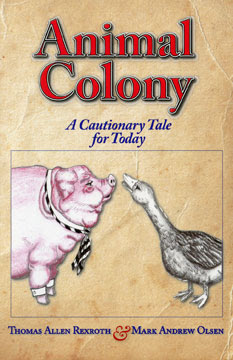 Then he found it!  A slim volume with a cautionary tale that demonstrated our history; where we've been and where we're headed if we don't get back on track.  It's called Animal Colony.  The dedication at the front of the book says it all ..... "We dedicated this book to our children and grandchildren. May the American experiment in self-government continue to guarantee each of them life, liberty and the pursuit of happiness.  May they be allowed to prosper to the point that they can share abundantly with others."
That week when his son arrived home, Dad gave him the small book and asked him to read it.  "I don't want to argue with you anymore, Son.  Do me a favor and read this book and then let's talk.  If we still disagree about the future of America, then I won't try to persuade you anymore."  His son agreed to read it that night.
In the easy-to-read, fable-like story the son read about a small colony of animals who grew tired of the oppression by their Masters, and decided to break away from the compound and escape to a new land.  They traveled across dangerous waters and suffered through near starvation that first winter.  At first they tried a communal approach to planting seeds and harvesting their food, but soon found out that the same small group always seemed to be doing the labor, while the majority sat back and waited for the harvest to be shared equally.  Since fewer people volunteered to do the planting, the yield was far smaller than was needed for the population.  They then decided that it would be best if everyone became responsible for providing their own food.  And the Animal Colony flourished.
The goose stated their newfound ideology well, "Equal opportunity for everyone has to be one of our foundations.  We all have the same rights and freedoms, and those have to translate into equal opportunity."  The horse agreed.  "Opportunity, yes, but the outcome has to depend on how hard the individual works."  The dog spoke up.  "The work of some Animals is benefitting others who will not work.  By trying to be fair to everyone, we've destroyed the natural incentive to work and benefit from our own labors.  We should try giving everyone the freedom to succeed or fail on their own."
With that, they set up the Four Great Truths of the Colony:  First, any Animal who refused to work cannot expect to eat.  Second, Everyone deserves an equal opportunity.  Third, The harvest belongs to those who toil for it.  Fourth, Whatever behavior we reward will increase, and whatever we punish or penalize will decrease.
By now you are getting the picture.  In a delightful, and thinly disguised allegory, the son was reading about the story of the Pilgrims escape to the New World; their failed attempt at socialism to feed their newfound colony; the embracing of a philosophy that all men are created equal and should have the opportunity to succeed or fail by their own efforts; and the adoption of a Constitution that would guarantee those rights to all men.
The son read through the night.  He read that the Animal Colony prospered because they valued liberty and self-determination.   There were those in the Colony who worked hard and set aside some grain for a rainy day, while others ate everything they had with no thought of saving for hard times.  Then a series of cold winters, followed by droughts brought hardships upon the Colony.  Those that didn't have a surplus of set-aside grain accused those who had been wiser of stealing from the poorer citizens and abusing their power.  "He who is hungry has a right to eat!", declared the pig.  And thus began a policy they called the Great Sharing.
Well, you can guess where this story is going.  I read the book in one or two sittings and it is quite engaging.  It presents the Progressive movement's ideology in a simple and transparent manner.  It's all there .... the less fortunate animals are victims; they are entitled to basic rights like food and a home; economic injustice is a crime; the harder the goose worked, the more of his harvest was taken for the Sharing; the Sharing never goes away - it just expands; and those animals with once prosperous businesses (like the beavers who built the dams for the Colony's water supply) moved away from the Animal Colony to places with lower Sharing rates.
So back to our father and son.  How does their story end?  Well, the son stayed up all night reading the book and the next morning at breakfast, he sat down at the kitchen table, quieter than usual.  The father didn't press him; he waited for his son to bring up the subject of the book on his own.  Finally, the son looked up with tears in his eyes, and said, "Dad, I've been wrong.  I get it now.  This book makes it so easy to understand.  I now know what this country is all about, and I can see where we're headed."
So my question to you is this:  Do you have a son or daughter coming home from college this Thanksgiving?  Could they benefit from this simple cautionary tale?  The symbols and metaphors are in plain sight and hard to ignore.  If nothing else, it will bring your discussions down to basics and specific issues that you can intelligently discuss.  This little book will never be lauded by lofty professors, but it has a clear message that is hard to ignore.  Maybe it will open some eyes and some minds in your family.

Psalm 78:1-3       "My people, hear my teaching; listen to the words of my mouth.  I will open my mouth with a parable; I will utter hidden things, things from of old—things we have heard and known, things our ancestors have told us."

Email ThisBlogThis!Share to TwitterShare to FacebookShare to Pinterest
Labels: Essential Books, Founding Principles, Liberty and Freedom, Our Culture., Our Youth