What Can We Learn From Aleksandr?

OK, I just can't help it.  Today, I think I am channeling some old-time Baptist preacher!  But this is on my heart and I have to say it.   And I know I echo the concerns of many of you.  I hear your worries and your consternation, and I read your sense of fear and anxiety in your emails.  This nation, which was once considered the "New Israel" by the Pilgrims, has seen a momentous decline in faith and belief in God.   For over 300 years after the Pilgrims landed, the Church and the Gospel were a guiding force in this land of freedom and opportunity; they were a benchmark by which the affairs of this land were conducted.  From the pulpit, the Church taught the Gospel and how it should affect the nation's decisions regarding its form of government, education, commerce, morality and yes, even politics.  The Church and the influence of the Gospel shaped America, and therefore the world.
But for the last 60 years it seems that the world has shaped the Church.   In America, we have let the world tell the Church that God doesn't belong in our schools;  we have let the world tell the Church that life does not begin at conception; and we have let the world tell the Church faith has no place in the halls of our governing institutions.
The other day I watched a broadcast of a group of American pastors who were boldly calling out America's churches for their failings.  They challenged the Church for the decline in faith in our country and for the appalling statistic that 49.5% of our children, ages 8 to 17 have never been inside a church!  How did that happen in a country that is known for being founded on Judeo/Christian principles? 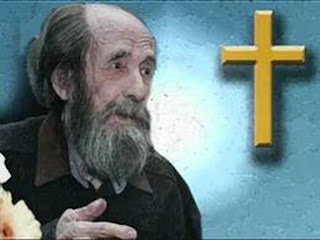 One of the pastors quoted Aleksandry Solzhenitsyn, famed Russian author (Nobel prize for Literature) and a survivor of the Communist regime.  During a 1983 address, Solzhenitsyn gave a dissertation on the Russian revolution and the Communist takeover.   He explained that the Marxist ideology successfully infused Russian society with an atheistic mentality through systematic secularization of the culture.   It became very easy to alienate the people from God and their traditional Christian morality and beliefs.   Solzhenitsyn simply and succinctly pronounced judgment on his countrymen .....  “Men have forgotten God; that’s why all this has happened.”
Solzhenitsyn went on to reveal the methods by which the Communists were able to separate the people from their God.   They were patient and calculating.  They started with the elite and the educated circles; by the time the Revolution occurred, faith had virtually disappeared among the academics and universities.  Sound familiar?  Hatred of God and the Church were the driving force behind Communism and at the heart of the ideology.   If a movement is going to take control of a society, they must destroy religion.  If the people have access to the Creator, and a power higher than the Government, then they can never be enslaved.  And as repressive as the Communist regime was, it was not able to eradicate Christianity; in fact, Solzhenitsyn proclaimed that his countrymen's awareness of God and his saving grace became even more acute under the severe persecution.
But he also lamented that Christianity and faith in the West (and I read that to primarily be the U.S.) had been watered down.  The meaning of life has come to be defined by the secular idea of "pursuit of happiness."  The differences between good and evil are being diminished, while political and class disparity have come to the forefront.  So where are our Churches?  Why do they no longer call attention to these false doctrines, and how have they been so successfully neutralized?  How have they lost their authority over our societal conscience?
Solzhenitsyn warned that atheist teachers in the West were bringing up a younger generation in a spirit of hatred of their own society and religious institutions.  And he made that statement in 1983!!  We've had an entire generation educated under that policy!
And you know what, to me, is the saddest part of this whole revelation?  Unlike Russia, we have not arrived at this ungodly state through an internal Revolution ..... no!  We have voluntarily embraced our own turning away from God!  We Christians, (and the Church!) failed in our commission.  We did not safeguard the teachings that Christ gave us, and we did not faithfully teach them to each successive generation.   We let the spirit of Pharaoh (enslavement), the spirit of Jezebel (sexual perversion and immorality), and the spirit of Herod (killing innocent, unborn children) invade our land.   We have ignored the only spirit that can save us ... the Holy Spirit.  Now it is up to each of us and every pastor in every pulpit throughout the land to get back to our real purpose.  We are here at this time, in this place, to reclaim this land for God.   And through His power and authority, it will be done!