Doing It Yourself Is Empowering

I don't know why it took me so long to do it.  But before I reveal what "it" is, let me start at the beginning.  For the past year, I have come into my own in regards to developing my own self-defense system.  I took Beginning gun training classes and then advanced to an accredited 3-day pistol training course and a rifle-training course.  I tried different firearms, deciding which would be best for a range gun and which would best fit my needs as a carry gun.
But this process did not come without some trial and error.  The trigger pull on this one was too long; this gun is still too big to effectively carry with my style of dress; the inside-the-waistband carry holster works better for me than the outside one.  But the REAL benefit of all these decisions was that I was allowed to make all these choices on my own.  First of all, I'm pretty stubborn and independent, so I'm not exactly a pushover.  But I am fortunate enough to be married to a man who encouraged me to go to the gun dealer and purchase my own gun, in my own name.  "You're the one who is going to be shooting and carrying it, so you have to own the decision."  What a wise man! 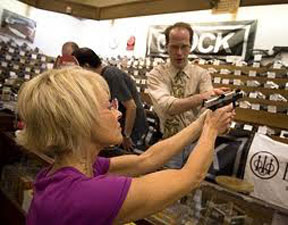 And that's something that I recommend every husband do for their wife.  Take them to the gun dealer, but let them try the different models and make the final decision.  You can make suggestions ... "Are you sure you want that smaller .38?  It may be smaller in size than the 9mm, but the recoil will be much more intense."  But ultimately, you need to let them make their own decision, and if they choose wrong, it will be a learning experience.  It's not the end of the world.  My first firearm was a .38 Lady Smith & Wesson revolver, and it didn't take me long to realize that just shooting target practice was no fun.  It beat me up too much!
So my husband took me down to the local gun dealer and I traded up to my Springfield XD 9mm when I decided to begin formal training.  It has been a great range gun, but I soon realized that it was not a great concealed carry choice.  I have added to my collection, and each time it was MY choice!  When you are the one filling out the paperwork and the purchase is in your name, it really means something!
It is a right of passage for young boys; their fathers take them down to the store and they buy their first BB gun or their first shotgun before hunting season.  And those boys are never the same!  And it is the same for us women.  Somehow, taking that step yourself (instead of letting your husband make your purchases for you) is an investment that empowers you.  You now have the responsibility to take that investment seriously.  It is a sizable expenditure and should not be taken lightly or wasted.  When you fill out that paperwork and sign that form, and then walk out with a case in your hand, you have a new identity.  You are a gun owner!  And it is liberating!
Which brings me back to my original statement.  What have I just done that adds a new dimension to my pride as a gun owner?  I joined the NRA!  And what made me "pull the trigger", so to speak?  The NRA has been an indefatigable opponent to the UN Arms Trade Treaty (ATT).   For nearly 20 years, the NRA has worked tirelessly to warn American gun owners about the United Nations’ efforts to undermine the constitutional rights of law-abiding American gun owners by putting in place international controls on small arms.  They have monitored all U.N. activities that could impact our Second Amendment rights, and have worked with our allies in the U.S. Congress to successfully assemble strong bipartisan opposition to any treaty that adversely impacts the Second Amendment. 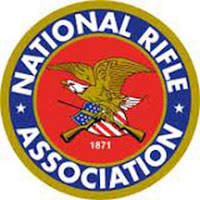 On July 26th, Sen. Jerry Moran (R-Kan.) gathered the signatures of 51 Senators on a letter to President Obama and Secretary of State Clinton opposing any treaty that infringes on our rights. The letter stated "As the treaty process continues, we strongly encourage your administration not only to uphold our country's constitutional protections of civilian firearms ownership, but to ensure--if necessary, by breaking consensus at the July conference--that the treaty will explicitly recognize the legitimacy of lawful activities associated with firearms, including but not limited to the right of self-defense. As members of the United States Senate, we will oppose the ratification of any Arms Trade Treaty that falls short of this standard."
And as of this moment, the Conference on the United Nations Arms Trade Treaty (U.N. ATT) has broken down and will not report a draft treaty to the member nations.   But we can't slack off.  It is likely that the Conference will submit a new draft treaty after the U.S. election, and the NRA has proclaimed that they will keep up the pressure to defeat it.  Without the NRA, it is likely this treaty would have been ratified by the Senate and one more death knell would have been delivered to the Second Amendment.  But the NRA can't continue to fight without our help!
So instead of relying on my husband and other men to lead the way, I made my own decision and added my voice to the discussion.  I now have a "dog in this fight" and it feels good!

Email ThisBlogThis!Share to TwitterShare to FacebookShare to Pinterest
Labels: Firearms and Training, Protect your Rights