Remember When We Thought Skynet Was Just A Storyline In A Movie?

I can remember watching the Terminator movie for the first time, and being fascinated with the imagination of a writer who could create such a diabolical plot.  Originally designed as a computer system with artificial intelligence, Skynet was given command over all computerized military hardware and systems (including our nuclear arsenal).  The objective of Skynet's designer was to eliminate any human error in launching a missile attack; and ultimately, to slow reaction time and guarantee a fast, efficient response to enemy attacks. 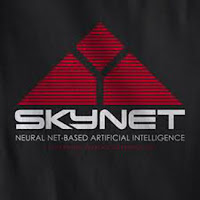 The problem in this frightening movie scenario, is that the computer started learning at an accelerated pace.  It quickly began thinking for itself, making decisions with one goal in mind:  the complete extermination of the human race.  Just a storyline, you say?  Not possible?
Well, have you stepped back and taken a real hard look at just how much of our lives are ruled by computers?  And how much of our self-reliance we've handed over to a microchip?  Consider SIRI, the latest component of the Apple iPhone.  Here is their sales pitch, word for word:  Siri is the intelligent personal assistant that helps you get things done just by asking. It allows you to use your voice to send messages, schedule meetings, place phone calls, and more. But Siri isn’t like traditional voice recognition software that requires you to remember keywords and speak specific commands. Siri understands your natural speech, and it asks you questions if it needs more information to complete a task.
In other words, Siri has a mind of her own, and if you're not smart enough to give her all the information she needs, she'll do your thinking for you and complete her task.  I'm sorry, but that just gives me the creeps!  I have family and friends that are so proud that they are part of the iPhone zombie population.  They are tied to their phones, eyes glued to the text messages that form a constant stream of nonhuman communication.  They wouldn't dare pick up the phone and have a personal conversation!  They can't be bothered; they might miss another trivial comment about what time Britney woke up this morning, or what Johnny's favorite TV show is.

But what they don't realize is that we are putting ourselves in a dangerous position; a situation where all this dependence upon computers, and their interconnection with every aspect of our lives, may soon make our very existence vulnerable.  Do you realize that with every new version of the iPhone, iPad, Android phone, or Bluetooth element in your car, a more sophisticated system is tracking your every move and monitoring your every conversation.  Doesn't that alarm you?
Every time you log onto Facebook, or text your opinion, or drive to your favorite firearms store, or buy anything online --- it's information that is being stored and used to compile a profile on you.  And even if you can eliminate a huge online presence, there are drones in the air that are so sophisticated they can monitor your whereabouts and hear your conversations.  Doesn't concern you because you're a law-abiding citizen?  Think again!  You are who the computers and those who are monitoring them say you are.  You are no longer an individual.
We have bought into the lies:  Computers will make your life simpler.  Computers are advancing our civilization and improving our lives.   Computers have become such a staple of our lives, we can't live without them.  You HAVE to have the latest technology or you are behind the times.  The greatest marketing strategy in the world!  And we bought it; hook, line and sinker! 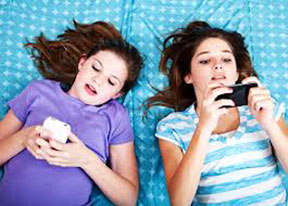 But here's my greatest fear:  all this advanced technology is lessening our unique qualities as human beings.  We no longer see the pain in each other's eyes, or feel the touch of a comforting embrace, or know the true loneliness that lies behind another's actions.  Because it is all artificially expressed with a few typed words.  We are just the human appendage on the end of a keyboard. We are slaves to the computer, and the computer rules our very existence.   Real privacy has become a thing of our past.  Want to know anything about anyone?  It can be found on a computer.
There is increasing talk of Radio Frequency Identification chips (RFID) to keep track of our children and to enhance the way we conduct commerce.  Including them on our drivers' licenses and credit cards is being discussed.  Want to stay out of this system?  Good luck!
So I guess my parting comment is this:  How were we so easily tempted by the promises of this artificial stimulus?  We no longer have the desire to seek new experiences, partake in bold adventures, or create fresh ideas.  Instead, we have become a generation of automatons who only respond to computer games, instant messaging, chat rooms and social networking sites.  We don't have the yearning to push ourselves beyond the timespan it takes to sign in and sign out.
The sad thing is that God didn't design us to become enslaved to a computer screen.  In a sense, they have become a false god.  And for many, I think "the 'Net" is just that ..... a trap; a system to entice and deceive.  You can hide behind that text or your screen persona and be whoever you want.  But be forewarned ...... Skynet, ummm, I mean the internet knows your real identity and everything about you.  So I challenge you to channel your inner Sarah Connor.  In The Terminator, she did whatever it took to protect her son and destroy the machine that sought to control the world and enslave the human population.  Are you up to the challenge?

Zechariah 10:2          "The idols speak deceitfully, diviners see visions that lie; they tell dreams that are false, they give comfort in vain. Therefore the people wander like sheep oppressed for lack of a shepherd."