You have heard me say it before .... if you are going to be handling a firearm, you need to get trained!  And you have heard my own confession .... I held a Concealed Carry Permit for two years before getting certified training, and I was appalled at how much I didn't know about carrying a weapon for self-protection.  And I feel compelled to sound the alarm again.
This past weekend my friends, Tom and Ashley, who have trained alongside PLW and myself for the last few months, felt qualified to get their Concealed Carry License.  They attended a one-day class, along with 25 other gun-owners, which included classroom instruction on laws that pertain to concealed carry and self-defense, as well as a firearms proficiency test (to assess how accurately you shoot a target).  We spoke to our friends at the end of the day, and this was their response:  "It was downright terrifying!" 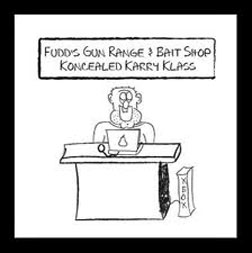 The story they told perfectly illustrates what I've been warning about.  According to Tom, people arrived at the class with a wide array of weapons; some in plastic bags, and many not even knowing the make and model of the gun they were qualifying with.  He was horrified to witness people with their fingers on the trigger and muzzling everybody in sight!  He said he was amazed that just by taking a class and being able to hit the target, these 25 people would soon be allowed to legally carry a weapon, and most of them would become dangerous not only to themselves, but the general public.
I am in no way advocating restrictions on Concealed Carry permits.  I am a firm believer in the Bill of Rights and the Second Amendment.  Our right to keep and bear arms should not be infringed upon.  But I'd like to take it one step further.  I'd like to call upon all citizens who decide to take advantage of this most important right to take the responsibility of educating themselves on gun safety before they apply for a CCL.
The fact is that a large majority of the people in Tom and Ashley's class will never carry a weapon for self-defense.  Their firearm will either stay tucked away in their car or within the confines of their home; rarely, if ever used.  Which is exactly my point!  If you are not going to familiarize yourself with your weapon; know how to safely load and unload it (even in the dark); learn how to manage different stoppages (commonly known as "jams"); or acquire the skills to effectively shoot behind barriers and at multiple targets at different distances --- all conceivably present in a "self-defense" situation --- then that permit tucked away in your wallet does you no good.  You are not automatically protected just by possessing it! 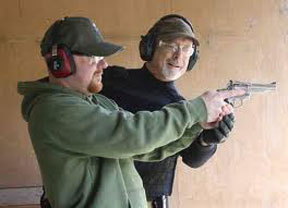 Not only do you have a responsibility to yourself to know how that weapon works and to handle it proficiently and safely, you have a second responsibility .... to cause no harm to innocent bystanders.  Just consider the Empire State Building shooting last week.  New York police are responsible for injuries inflicted on nine innocent bystanders during their shootout with the perpetrator.  And they've supposedly had training (but that's a whole other topic).
My point is this:  you have no business carrying a firearm for self-defense unless you have had certified training in the handling of that weapon.  Through the different scenarios I have run through in my training classes, I can promise you that when confronted with an aggressor, it will be nothing like your CCL class where you stood in front of a target at 3 yards and pulled the trigger.  Your adrenaline will be surging, your heart will be pounding, you're likely to get tunnel vision, and you won't remember a thing that you did.  That's why you have to rely on professional training that will teach you muscle memory and automatic responses.... through countless repetitions of learned skills.  You don't acquire that through osmosis in an 8-hour CCL class.
So once again, I'm ringing the bell, and shouting from the rooftops.  Just because you passed that Concealed Carry License class, it does not mean you are ready to carry a weapon for self-defense!  Please be sensible and get some instruction; know what that permit entitles you to do and then learn how to correctly operate that weapon and safely defend yourself and your family.   Legally being allowed to carry is simply not enough!

Hebrews 12:11       "No discipline seems pleasant at the time, but painful. Later on, however, it produces a harvest of righteousness and peace for those who have been trained by it."
Posted by Pam Kohler at 7:00 AM