I have been guilty of being so focused on the collapse of America, that I have taken my eye off of the European landscape.  As you know, I do not claim to be an expert on economics, but I know enough to recognize that the economies of the world are interconnected, and we show a serious lack of judgment if we ignore the alarm bells going off across the Atlantic.
Here is what concerns me and how I think it might affect us .... I picture the economic situations in Europe (which centers around Greece) and the United States like two fat kids on a seesaw.  I warned you I'm not an economist!  But let me see if I can explain what I see. 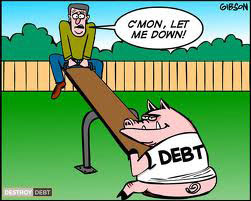 The Eurozone is very much on the brink of a complete breakdown, very much like our own economy.  Over the past weekend, political leaders and bankers throughout Europe continued their painful discussions to try to come up with a solution about Greece.  Here's the problem: Greece's economy is still going down the tubes.  Its unemployment rate hovers around 25% and the Greek GDP looks like ours did in the Great Depression.  In short they need another bailout from the European Central Bank in order to avoid declaring bankruptcy.  BUT, in order to receive that much-needed shot in the arm, the International Monetary Fund, the European Central Bank and European Commission are demanding that the Greek government follow through with the strict requirements for receiving more printed money.  In other words, the rescue plan comes with strings attached.
This trio of "regulators" wants rigorous Greek reforms, in the shape of privatization of industries, changes in the labor unions, and long-run economic policy revisions -- or the next installment of 33.5 billion euros to assist the Greek economy will not materialize.  The Greek Prime Minister knows his countrymen are not in favor of these strict reforms, so he is asking for more time to implement them, and a relaxation of the terms.  So the question is, who is going to blink first.  The citizens of Germany and France, and their corresponding leaders, are not backing down.  German Chancellor Angela Merkel is holding a hard line, and insisting that Greece be made to meet their obligations.  On his part, Greek Prime Minister Antonis Samaras has threatened abandoning the euro and returning to the drachma as Greece's currency.  Obviously, this would cause great chaos in the Eurozone and further destabilize the entire European economy.
And interestingly enough, our own economic fiasco may be strengthening the euro.  How so?  There is speculation that the possibility that our Federal Reserve might once again employ quantitative easing has driven the U.S dollar lower, and driven the euro up.  Keep in mind that the European market might also be elevating the value of the euro out of the sheer hope that they can muddle through this Greek (and Italian and Spanish) financial crisis and stabilize their own shaky foundation.  In any event, the economies of both Europe and the United States offset each other, resulting in a tenuous balancing act .... hence, the image of global economies teetering on the brink of disaster.
With both Europe and the United States turning on the printing presses and bailing out governments that are fiscally unsound and running on empty, it is easy to see why noted economist, Jim Rogers says, "The world is drowning in debt."  Rogers goes on to say, "What would make me very excited is if a few people [in the government] went bankrupt."  I'd like to add "governments", plural.  Perhaps there are also those in Europe that could stand to fail.  And is it just me, or does it seem easy to figure out that we should stop spending when we have to create the money to pay our debts? You've heard it before --- the solution to too much debt is not more debt!
It's like we're part of a nightmarish global pyramid scheme .... and when George Soros and other billionaire investors are dumping all their financial holdings and buying gold, something is going on! But wait --- everything is fine; leaders in both Europe and America keep telling us so, right?  But eventually the bill is going to come due, and everyone will discover that it has all been an illusion.   We've just been one step ahead of the wolf at the door .... and the crack in the middle of the seesaw is deepening and threatening to dump us both.  Get ready for a hard fall!

Isaiah 30:10     "They say to the seers, “See no more visions!” and to the prophets, “Give us no more visions of what is right! Tell us pleasant things, prophesy illusions."