I am a Bible-believing Christian, which means I accept every word of the Bible as God's revelation to those who trust in Him.  I am not a "feel good" Christian who is inclined to pick and choose among the verses of Scripture, and view the world only through the lens of God's love.  I accept ALL of His Word, which warns us of coming persecution.  In Matthew, Jesus plainly tells us that we "will be handed over to be persecuted and put to death, and you will be hated by all nations because of me."  For those of you who doubt, whether you are a believer or non-believer, or question the veracity of this Scripture, all you have to do is read the headlines of the day: 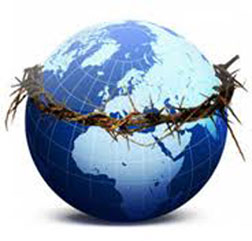 A British-based advocacy group, called Christian Solidarity Worldwide (CSW), stated that while there were no official charges brought against four men involved in a Bible study, their six-week arrest and detention appears to be "part of a pattern of religious repression that continues to occur in many parts of the country."

Syrian Christians Targeted By Islamist Rebels Amid Massive Exodus
Religious minority groups, and particularly Christians, have become the primary target of rebel terror groups that execute in "the name of Allah".  International Christian Concern, a major advocacy group for the persecuted Christians caught in the middle of the Syrian civil war, has expressed grave warnings about the position of Christians in this war-torn country:  "Islamic extremism is on the rise in a civil war that is taking on increasingly stronger sectarian overtones," ICC said.  Thousands of Christians are fleeing the country, seeking safe haven in neighboring Turkey. (Although I question whether Christians will be any more welcome there).

Pakistan Christian Homes Torched, Churches Attacked After Jailing Girl
From Islamabad, Pakistan, comes this news story:  "Muslims torched Christian homes and "destroyed" a church in a slum area of Islamabad while suspected militants shot at another church outside Pakistan's capital, after the jailing of a mentally handicapped Christian girl for "blasphemy", witnesses said Tuesday, August 21."  The 11-year-old girl, who cannot read, is accused of blasphemy for burning a copy of the Koran.  The girl is now being held in a Pakistani jail, and Muslim clerics are demanding that she face charges under the countries strict blasphemy laws.  Meanwhile, thousands of Christian have fled the area, as the burning of their homes and churches continues.

Muslim Group Demands Country's Christian President Convert, or Resign
Meanwhile, in Nigeria, the militant Muslim group Boko Haram demanded that Nigeria's Christian president either convert to Islam, or resign.  President Goodluck Jonathan is called upon to "repent and forsake Christianity," otherwise Boko Haram would continue their violent campaign, in which more than 800 people have been killed and dozens of churches were torched.  Boko Haram, whose name translates as "Western education is forbidden," has come under the influence of an inner group that is dangerous and "increasingly sophisticated and increasingly lethal", according to U.S. Assistant Secretary of State for African Affairs.  According to the Assistant Secretary, Boko Haram wants to extend Islamic law over all of Nigeria, even though nearly half of the African nation is Christian.  And despite Haram's increasingly bloody campaign, our administration has resisted all efforts by U.S. lawmakers to designate the group as a foreign terrorist organization under American law. 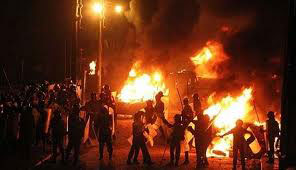 And we must not turn a blind eye to what's happening to Christians in Egypt.  It appears that the Koran has its own definition of what a "true Christian" is (although the word "Christian" never appears in Islam's holy book).  And you guessed it ---- the orthodox Christian Copts don't fit that definition.  Apparently a lawyer from Alexandria submitted a report to the public prosecutor requesting that Egypt's Copts be excluded from the committee forming the nation's new constitution.   Here's his argument:   "The prophets of Allah — Moses,  Jesus, and Muhammad — are all mere humans sent by God to pass his message on to creation.  But should any sect claim that their prophet is the divine "Son of God," its adherents are infidels. Since Christians believe Jesus to be the divine Son of God, they are polytheistic infidels and not the Nasara (so-called "true Christians") of the Koran; therefore, Copts who also profess the divinity of Christ as expressed in the Trinity must be barred from having any say in Egypt's new constitution."  This report follows continued violence against the Egyptian Christians, which has included imams calling for jihad against all Christians; the looting and torching of Christian homes and churches; and decreased rights of Egyptian Christians through "forced reconciliation."

Have you read enough?  Believe me, there are many more news stories like these; reports that don't make the internet news agencies.  The fact is, those that call Jesus Christ their Lord and Savior are being singled out across the globe.  It isn't just in the Middle East where militant Muslims seek the deaths of their centuries-old enemies.  Persecution can take on far more subtle shapes.  Consider these headlines, right here in the good 'ol USA:

Atheists Attack Church in Georgia for Feeding High School Football Players
The Freedom From Religion atheist group called for an investigation after reports surfaced that a Georgia high school football coach had several local churches provide pre-game meals for his football team.  Apparently several members of one of the church's youth group are on the football team, and the meals have been a longstanding tradition.

Christian Photographer Who Refused Same-Sex Wedding Assignment Gets Day in Court
As of last week, the New Mexico Supreme court agreed to review the case of an Albuquerque photographer forced to pay a $7,000 fine for refusing to use her "artistic expression" to help two women celebrate their commitment ceremony. A N.M. Court of Appeals upheld the decision, claiming the photographer was guilty of "sexual orientation" discrimination under state anti-discrimination laws.  At this time, attorneys with Alliance Defending Freedom have appealed to the State Supreme Court, citing that "Americans in the marketplace should not be subjected to legal attacks for simply abiding by their beliefs."  This will be a landmark decision and will affect all Americans in business. 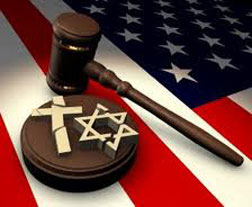 And just in case you are still not convinced, just read over some of these items from the 140-page report of the Family Research Council and Liberty Institute:
---  A federal judge threatened "incarceration" to a high school valedictorian unless she removed references to Jesus Christ from her graduation speech.
---  City officials restricted senior citizens from praying over their meals, listening to religious messages, or singing gospel songs, at a senior activities center.
---  Following U.S. Department of Veterans' Affairs policies, a federal government official sought to sensor a pastor's prayer, eliminating references to Jesus, during a Memorial Day ceremony honoring veterans at a national cemetery.
Now do you see why I am ringing this warning bell?   Our First Amendment is being turned upside down by aggressive atheist groups, federal bureaucracy, and radicalized minorities that have the ear of our elected officials.  Please don't make the mistake of thinking that Jesus's warning of persecution means only overt violence and hostility.  The Enemy is far smarter than that.  His battle plan is stealthy, cunning and artful.  Political correctness and Tolerance are his by-words; it is only one easy step towards instituting laws that forbid the expression of our faith because someone is "insulted."  The time to take a stand is NOW!  Fight to protect our First Amendment and the very reason the Pilgrims landed on our shores.  And never, ever abandon your faith in our Lord!

2 Corinthians 12:10      "That is why, for Christ’s sake, I delight in weaknesses, in insults, in hardships, in persecutions, in difficulties. For when I am weak, then I am strong."
Posted by Pam Kohler at 7:00 AM