The Battle For American Values

In today's post I want to do a comparison study of two new TV shows that will be airing this Fall.  I don't normally care about the culture of television, because I find it often promoting a lifestyle that does not reflect my values.   But this week, the entertainment headlines have been quite surprising, and I hope they reflect a growing trend.  Might it be possible that average, everyday Americans, who have a profound belief in God, have finally gotten tired of having alternative lifestyles, Michael Moore America-bashing documentaries, and anti-Christian rants crammed down our throats?  It is certainly encouraging to see that there are still network executives that are willing to stand for something other than hollow, pointless reality shows and a far-left version of American society. 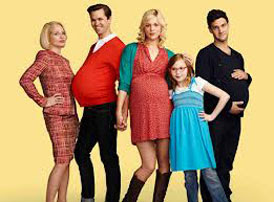 Case in point:  The New Normal.  I'm sure you can guess what this new TV comedy is all about, just from its name.  In case you need a little help, it is about a gay couple and the woman they hire to become the surrogate mother of their baby.  An NBC affiliate in Utah has banned the show from their Fall season, citing its inappropriateness and "crude dialogue, explicit content and offensive characterizations."   I did not feel it was fair to make a statement on the show without knowing its content.  So I watched the pilot episode, and I have to say that not only is the show un-funny, but it is a blatant misrepresentation of conservative stereotypes.  The writers took every chance they could to slam their perception of Christian conservatives, using terminology like "far-right Christian extremists"; "secret operative for the Republican Party", and "take your racist views back to the past or the South".
They use the ultra-liberal, and I have to say very angry, Ellen Barkin, to portray every cliché of what Hollywood thinks we are like.  She ridicules gays, is a racist, a bigot, and is pretty much a detestable, horrid person.  I'm sure it's a role she loves to play; it allows her to show who she thinks we are.  And that's pretty plain based on her recent comment that she "hopes Hurricane Isaac drowns everyone at the RNC."   This role allows her to spew her venom in prime time.
The writers go out of their way to make sure we understand that, in their own words, "the abnormal is now the new normal."  The only caring, loving people are the gay men and the single mom who accepts them and hires on as their surrogate baby-mama.  And if you don't fit in that category, then you're just like the ugly Ellen Barkin character, who is the matriarch of three generations of women who had children out of wedlock, children in loveless marriages, and children born "by accident", which is supposed to represent failures of the traditional family.  Need I say more?  And never mind the explicit language, actions, and innuendos.  And NBC wanted to air this show during family viewing time?  I respect Utah station KSL-TV for having the guts to say, "enough is enough."  And I am not ashamed to say that The New Normal does not represent my views, and I still stand by the make-up of the traditional family.  I will never judge nor condemn others for their choices, but neither will I compromise my Christian values. 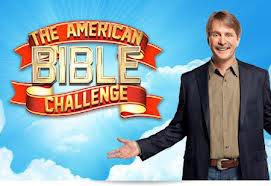 Now let's do a 180-degree turn and take a look at a new TV show on the Game Channel, called The American Bible Challenge.  This show combines elements of faith and fun while contestants play to win money for their favorite charities.  Each segment of this family-friendly show pits three teams against each in a Bible-trivia contest to see which team contributes $20,000 to their chosen charity.  But this show isn't just some boring, sappy Christian version of Jeopardy.  It offers emotional testimonies from the contestants as they share their personal stories.  The premiere episode featured Ron Milton, an Iraq War veteran and Purple Heart recipient, who told the audience that although he grew up in a Christian home, after joining the Army at 18, he strayed from his childhood faith.  One day, a friend invited him to a Bible Study and it made a profound impact on him.  But first he had to deploy to the war zone in Iraq.  "I spent a year seeing the worst in humanity," Milton explained. "And when you understand who Christ is, the worldview Christianity gives you, it gives you answers for why the world is so screwed up. It gives you answers for how the world can be fixed. And when you view your experiences in a war zone through those lenses, then it just makes more sense."   And he didn't need a script-writer to compose this for him.
This dialogue is worth tuning in for.   There is no hateful or critical diatribes; no "in-your-face" touches or over-the-top stereotypes.  Just honest and real people giving and receiving charity for those that need a helping hand.  This is something we "extremist" conservative Christians are pretty good at.  And we don't need the government mandating that we do it.  The organizations that received that much needed help during the first episode were Minnie's Food Pantry, providing food for families in need; City Crossroads, a San Francisco-based nonprofit that works with low income families and multi-ethnic youth; and Samaritan's Purse, a non-denominational evangelical Christian humanitarian organization that works worldwide to assist people in physical need alongside their Christian missionary work.
I know I may sound a little old-fashioned, but I'm tired of being subjected to "edgy" shows that some Hollywood executive has deemed "relevant".  They have determined our culture long enough.  It's time we take it back, and shows like The American Bible Challenge, are a good start.