Small Arms Treaty Is Another Attack On Our Sovereignty

First, we are told that it is all a matter of "fear-mongering"; once again the nutty gun-lovers of America are seeing threats where there are none.  But there is so much behind-the-scenes maneuvering between our government officials and the United Nations, that anyone paying attention knows that this Treaty doesn't pass the smell test.
So, just what is the U.N. Arms Trade Treaty?  It is better known as the "small arms treaty", and here is the official statement by the United Nations Office of Disarmament Affairs (even that name makes my skin crawl!) ......  The global trade in conventional weapons – from warships and battle tanks to fighter jets and machine guns – remains poorly regulated. No set of internationally agreed standards exist to ensure that arms are only transferred for appropriate use.
Many governments have voiced concern about the absence of globally agreed rules for all Countries to guide their decisions on arms transfers. That is why they have started negotiating an Arms Trade Treaty. Preparations to address this issue have been underway since 2006 and will culminate in the Conference on an Arms Trade Treaty in July 2012. 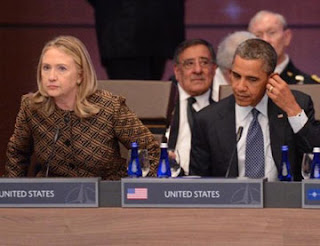 That means they're at our back door, folks!  And if that doesn't make the hair stand up on the back of your neck, this should.  Both Secretar of State Hillary Clinton and President Obama are openly supporting the ratification of this treaty.  Oh, they will tell you that it has nothing to do with individual gun rights of U.S. citizens, but is an attempt by the U.N. and nations around the world to address gun sales by "rogue nations."
But what they're not telling you is that this treaty DOES apply directly to the United States because it lumps us together with these so-called "rogue nations."  And it's even more sinister than that; the real motive is to use an international body to bypass our Bill of Rights and the Second Amendment to get what they've wanted all along -- a ban on guns in this country.  You see, it is a poorly disguised attempt to implement massive gun control without having to go through the normal legislative process in Congress -- because they know it would never pass.   The real plan is to ignore Congress and use the U.N. to trump U.S. law by signing a treaty that would grant international supervision over the sale and possession of guns in America.  Pretty slick, huh?
How would the treaty function?  The Arms Trade Treaty would specifically require signatories to identify and trace, in “a timely and reliable manner,” illicit small arms and light weapons. The information would be required to be submitted to the United Nations.  Supporters say the treaty is necessary to prevent rogue countries from being able to purchase guns from arms dealers.  Critics of the treaty have long felt that it would lead to mandatory registration of all firearms and every sale; even those between individuals.   So it seems pretty clear to me --- the treaty would directly impact gun sales in the U.S. and by extension the gun rights of individual citizens.
And if that doesn't convince you, here is a statement by Retired Lt. General William Boykin:  "There has been a decree by this administration --- by the president and the secretary of state --- saying that our president will sign the United Nations small arms treaty, which is about how we will buy sell and control individual private weapons.  That means the United Nations, an international body, will decide how you and I, as Americans, can buy and sell our weapons; how we control those weapons; who is authorized to have those weapons; and where they are. This is a dangerous trend." 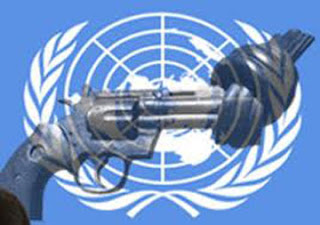 So once again, it seems to me that our Leaders are willing to throw away our sovereignty for the sake of being part of the "global community."  It doesn't seem to matter to them that the Constitution gives the power to regulate international commerce to Congress alone, or that the Second Amendment guarantees the “fundamental, individual right to keep and bear arms”, and the U.S. has no business supporting a treaty that infringes on the Bill of Rights.
Oh, wait.  I forgot.  We've just been shown by the Supreme Court that the Constitution is insignificant, right?  So what makes us think our Bill of Rights will be honored?
I would caution you to do your own research and make up your own mind as to whether my conclusions about this little "non-threatening" treaty are correct.  (For an in-depth analysis of this Treaty, read this article.)  But as far as I'm concerned, it is appalling that our Government would even consider giving authority to the U.N. to regulate the domestic manufacture, possession or sale of firearms or ammunition; let alone be party to any sort of international gun registry that would impede upon the privacy rights of law-abiding gun owners.
But this post comes with a further warning .... apparently some Senators have stated they support the general concept of the treaty, but believe countries such as the U.S. should have “exclusive authority to regulate arms within their own borders."  This statement seems to indicate that the Senators believe firearms registration is acceptable provided it is initiated by individual governments.  Do you know your Senator's position?  I suggest you make your opinion known.  And one final thought .... Still feel your Second Amendment rights are secure?

Luke 11:21-22       "When a strong man, fully armed, guards his own house, his possessions are safe.  But when someone stronger attacks and overpowers him, he takes away the armor in which the man trusted and divides up his plunder."