Prophecy Fulfilled Before Our Very Eyes

Now, before you decide to skip this post because it sounds "too church-y", give me one paragraph to change your mind.  If it doesn't interest you to take a look at events from a Biblical perspective, then I invite you to investigate these occurrences from a historical viewpoint.  If nothing else, the facts are compelling and the stories are captivating. 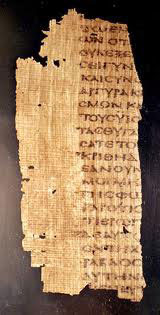 As a student of the Bible, I love both the history and the prophecies of the Good Book.  It is not a book of fables and fairy tales, as some would have you believe.  And there is much to learn about the relationships of nations in our modern world from the chronicles of history reported in the Bible.  In addition, those prophets, that are often scoffed at and dismissed, did a pretty darn good job of predicting how world events would turn out.
Did you know that experts have combed the pages of the Bible and found approximately 2500 prophecies --- of which nearly 2000 have already come true, or been "fulfilled", in Biblical terms.  Furthermore, these 2000 predictions, or forecasts, can easily be proven in the annals of history.  They are not like fortune-tellers, or mediums, or clairvoyants, whose predictions are sporadically accurate.  The Bible's prophecies have been 100% error-free.  Here are just a few that you might find interesting:

1)  In approximately 700 B.C. the prophet Micah named the tiny village of Bethlehem as the birthplace of Israel's Messiah (Micah 5:2). The fulfillment of this prophecy in the birth of Christ is one of the most widely known and widely celebrated facts in history.  (Probability of chance fulfillment = 1 in 105.)
2)  In the fifth century B.C. a prophet named Zechariah declared that the Messiah would be betrayed for the price of a slave—thirty pieces of silver, according to Jewish law-and also that this money would be used to buy a burial ground for Jerusalem's poor foreigners (Zechariah 11:12-13). Bible writers and secular historians both record thirty pieces of silver as the sum paid to Judas Iscariot for betraying Jesus, and they indicate that the money went to purchase a "potter's field," used—just as predicted—for the burial of poor aliens (Matthew 27:3-10).  (Probability of chance fulfillment = 1 in 1011.) 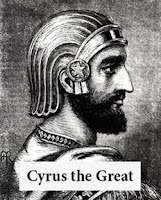 3)  The prophet Isaiah foretold that a conqueror named Cyrus would destroy seemingly impregnable Babylon and subdue Egypt along with most of the rest of the known world. This same man, said Isaiah, would decide to let the Jewish exiles in his territory go free without any payment of ransom (Isaiah 44:28; 45:1; and 45:13). Isaiah made this prophecy 150 years before Cyrus was born, 180 years before Cyrus performed any of these feats (and he did, eventually, perform them all), and 80 years before the Jews were taken into exile.  (Probability of chance fulfillment = 1 in 1015.)
4)  Jeremiah predicted that despite its fertility and despite the accessibility of its water supply, the land of Edom (today a part of Jordan) would become a barren, uninhabited wasteland (Jeremiah 49:15-20; Ezekiel 25:12-14). His description accurately tells the history of that now bleak region.  (Probability of chance fulfillment = 1 in 105.)

These are just a few of the nearly 2000 prophecies that have already come true.  So, naturally, that leaves about 500 yet to be fulfilled since the Bible was written.  Think those haven't happened?  Here is perhaps the most prominent prophecy to come true in our lifetimes:  (Amos 9:14-15)  I will bring back my exiled people Israel; they will rebuild the ruined cities and live in them. They will plant vineyards and drink their wine; they will make gardens and eat their fruit. I will plant Israel in their own land, never again to be uprooted from the land I have given them,” says the Lord your God.  This prophecy came true on May 14, 1948 when Israel became a modern state.
So think that you'll never see a prophecy come true in your lifetime?  I submit to you that we are living in the midst of such a fulfillment this very day.  And it is happening in Egypt.  If you listened to the speeches of our Leaders, the "Arab Spring" was supposed to be about democracy coming to the Middle East.
Instead we saw rioting in the streets, governments toppling and the rise of the Muslim Brotherhood.  Now there is a huge conflict between Egypt's new Muslim Brotherhood President Mohammed Morsi, their Parliament and the military.  The powerful Supreme Council of the Armed Forces (SCAF), which was running the country after Hosni Mubarak was ousted by a popular uprising last year, had dissolved parliament, after a ruling by Egypt's Supreme Constitutional Court.  It now seems that hard-line Islamist President Morsi seeks to ignore the Court's ruling, and is trying to reinstate Parliament.  This struggle between the Muslim Brotherhood and the Military is being played out hour by hour. 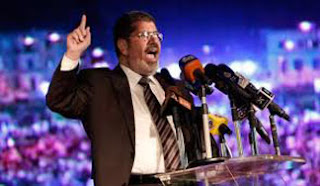 But beyond his own internal struggles, the new President is on record as supporting Sharia law; saying he wants to repeal the ban on female genital mutilation; and he wants to roll-back the laws against sexual harrassment, all of which would be a huge set back in womens' rights in Egypt.  One of Morsi's trusted allies, Cleric Safwat Hijazi, has openly called for Egypt to become a Muslim Super-State with Jerusalem as its capital.  Think the Bible doesn't have anything to say about this?  Think again.  I submit to you the prophet Isaiah in Chapter 19:2-4:  “I will stir up Egyptian against Egyptian—brother will fight against brother, neighbor against neighbor, city against city, kingdom against kingdom.  The Egyptians will lose heart, and I will bring their plans to nothing; they will consult the idols and the spirits of the dead, the mediums and the spiritists.  I will hand the Egyptians over to the power of a cruel master, and a fierce king will rule over them,” declares the Lord, the Lord Almighty.
So, maybe you don't buy into the Bible as the Word of the Living God, or maybe you just can't come to grips with the fact that it is a book by which you can live your life.  But I invite you to explore its history and listen to what it is trying to tell you.  There is Truth at its core, and as this world is careening faster and faster out of control, it is a good anchor to cling to.  I promise; you will find encouragement to endure and to survive the powers that intend to destroy.  And above all else, you will find hope and that is something we will all need in the days to come.