For the last forty-plus years, the role of the Federal Government in Education has been growing.  The latest offer of reforms appears under the vague name of Common Core State Standards Initiative.  So what is the objective of this latest Federal Program?  Nothing less than to nationalize the content taught in every public school across America!

I don't think anyone would disagree that the quality of education in this country is declining.  Just consider how we have fallen in the rankings.  According to the Organization for Economic Co-operation and Development (an international organization to promote policies that will improve the economic and social well-being of people around the world), the 2011 statistics show the U.S. ranks 17th in Reading, 23rd in Science, and 31st in Math.  This should come as no surprise, considering a report generated by the National Commission on Excellence in Education, way back in 1982.
This report determined that the system of education in the United States was failing to meet the needs of the competitive workforce, citing tanking SAT results, poor test scores from the National Assessment of Educational Progress (considered the nation's report card) and sliding graduation rates. It most famously said that a “rising tide of mediocrity” was threatening our nation.
It seems that nothing has changed since this report was issued.  And judging by the failure to implement some of the suggestions of the Commission, I think we can understand why.  These were some of the recommendations:
---  The Commission stated that grades should be the indicator of academic achievement.  Failure to implement.  (This reflects the "everybody gets a ribbon" mentality).
---  Standardized testing should be done at major transition points from one level of schooling to another.  Failure to implement.  (Thanks to No Child Left Behind).
---  Children should attend school for 7 hours a day, 200 to 220 days per year.  Failure to implement.  Policymakers balked at the expense, and industries who employ teenagers during the summer opposed it.
---  The Commission recommended that salaries for teachers be "professionally competitive, market-sensitive, and performance-based.”  Failure to implement.  So instead, we get "mediocre" teachers who continue to turn out "mediocre" students. 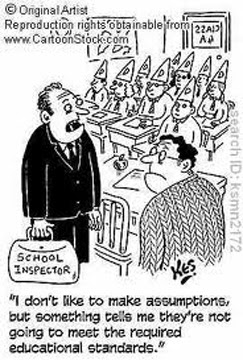 So for the last 30 years, our Education Policy has seen the control taken from local school districts and parents, and replaced by centralized control administered by Washington.   The Common Core effort is the latest attempt to offer a "carrot-and-stick" option to state leaders.  And, as always, money is at the center of this deception.  The Department of Education offered $4.35 billion to states in "Race to the Top" grants, conditioned in part on adoption of “standards common to a significant number of states.” Translation:  Adopt the Common Core State Standards Initiative and Washington will line your pockets.
So why am I so upset by this Federal encroachment?  The constitutional authority for education rests with states and localities, and ultimately with parents—not the federal government. The federal government has crossed this line in the past, but dictating curriculum content is a major new breach that represents a critical level of centralization and a major setback for parental rights.  And I'm sure you can imagine just what this curriculum will entail .... more socialism, less freedom.
But the bottom line for me is this:  National standards will only increase the fundamental problems in our education system by giving more control to the bureaucratic Department of Education; forcing schools to comply with Washington's demands; and offering less accountability to parents and taxpayers.  In simple terms, the type of information provided by national standards will be more useful to bureaucrats in Washington who need to make decisions about funding formulas than it will be to parents interested in their children’s educational progress.
And that doesn't even take into account the cost!  Estimates exceed $1.6 billion in California and $3 billion in Texas.  According to the National Governors Association and the National Association of State Budget Officers, 17 states project some $40 billion in budget gaps for FY 2013. And guess who will be making up the difference?
So let me get this straight.... over the past 4 decades we have given more and more control of the education of our children to Washington; the results being rising costs to the taxpayer and lower scores for our students.  Now the Administration wants to go even further by letting Washington control a standardized education system.  Does this make any sense to anyone?  No wonder home-schooling has grown by nearly 43% in the last decade!
So here we go again, flouting the Constitution.  Just like Obamacare, which twisted the Constitution to allow the Federal Government to control healthcare, we now see that although the Constitution does not  empower the Government with the responsibility of public education (instead leaving it with state and local government), Government has ignored this restriction and proceeded unhindered.
It is going to be up to the States to stand up against this overreach of power.  Will they be able to resist the lure of federal funds?  Will anyone have the courage to stand up against the Department of Education?  Nothing less than the future of our children depends on it.

Exodus 33:13      "If you are pleased with me, teach me your ways so I may know you and continue to find favor with you. Remember that this nation is your people."