I'm going to start this post with a disclaimer:  I have never seen myself as a political expert, authority, pundit or guru.  Actually, I'd rather stay as far away from the political aspect of any issue as I can, because I have become increasingly distrustful of any politician; no matter on which side of the aisle they reside.
But after the victory on Wednesday by Governor Scott Walker in the strife-ridden state of Wisconsin, I wanted to dig a little deeper than the Conservative vs. Progressive, Public Sector Unions vs. Private Sector battlefields that have been at the forefront of the latest media cycles.
Keep in mind --- this is only my opinion.  I'm sure there are many more layers underneath the veil and behind the curtain.  But this is what I have discerned; admittedly as an unqualified amateur. 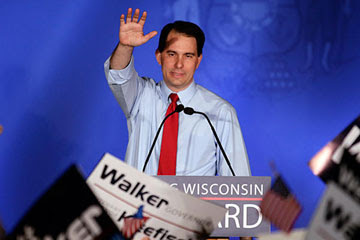 I think we can all agree that Governor Walker's recall election was about his efforts to defeat the entrenched union interests in his state.  Public sector unions (according to Wikipedia, which we can trust in this instance) are trade unions which primarily represent the interests of employees within public sector (government-owned, supported or regulated) organizations.  Such unions are highly controversial among conservatives (like Governor Walker) who advocate for the downsizing of the public sector and blame public sector unions for running up large state deficits.
I don't think anyone can argue that unions have successfully bargained for well-paid pension plans for their members.  I am not saying that retirees don't deserve a pension for years of hard, loyal work.  But when the income from pensions far outweigh what the employee made throughout a 30 year career, then something's gotta give.  Ever-increasing payouts to retirees serves to also increase the burden on society; and crush the middle class with higher and higher taxes to support the social welfare state.
And when in 1959, Wisconsin became the first state to allow collective bargaining by government employees, the die was cast.  Baby Boomer union retirees now threaten to bankrupt the state.  And Wisconsin is not the only state facing such deficits.  That's why this election was so important.
Governor Walker instituted such policy changes as ending fraudulent sick leave policies, in which employees could call in sick and then work the next shift for overtime pay.  Under his leadership, the government can no longer forcibly collect union dues from workers' paychecks, resulting in voluntary dues.  And his example is sure to be followed by other Governors.  Governor Walker was able to reduce the hold of unions on the state budget.  Unions can no longer demand mandatory unionization, enforced dues collection, or give oversized campaign donations to politicians that promise to do the unions' bidding.
Now you might be thinking that I am championing Governor Scott Walker; and I make no apologies for wanting to see limited government come back into focus.  But there are issues that also bother me about Governor Walker.  First of all, Police and Firefighters were exempt from the budget cuts he made.  And while I agree that their service is critical, everyone must pay their fair share of the hurt.  In order to not further alienate the citizens of his state, Walker must find a way to treat all workers equally --- or the Federal government will certainly strike down sections of his hard-won law.
Secondly, Walker's claim that he "wiped out a $3.6 billion deficit without raising taxes" was a little misleading.  Here's out it plays out, according to an article by Jason Stein, of the Journal Sentinel: 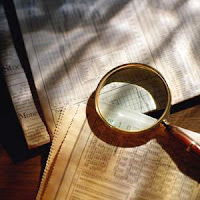 In June, Walker and Republican lawmakers passed a balanced budget according to the measure that is always used for state budgets - cash accounting.  That means essentially that the state will have cash left in its main account - an estimated balance of $68 million - when the budget ends on June 30, 2013.
That's the measure that state officials use for budgets and the one Walker has repeatedly touted in statements when he says he eliminated a $3 billion budget deficit on a cash accounting basis.
But the state's accounting method falls well short of those used by publicly traded companies. Those "generally accepted accounting principles" (GAAP) count not just whether the state has cash on hand but also whether it has made promises to pay money that it can't back out on.
For example, a consumer may have money in his or her bank account, but if a looming credit card bill is even larger, then he or she would have a deficit under that method of accounting. This so-called GAAP deficit isn't new to the Walker administration - it goes back years in state government to past governors such as Democrat Jim Doyle who also have said they balanced the budget on a cash basis while the GAAP deficit remained.


I guess it depends on which term you use, if Governor Walker actually balanced his budget or not.  Two methods of accounting that result in two very different bottom lines --- hmmm, doesn't really leave me feeling all warm and fuzzy about the honesty of the Governor's Office.  And I'm sure you will agree with my skepticism, when I ask, "How many other terms have double meaning?"
So, what are the repercussions of this volatile election?  What does it mean for November?  You can be sure that both sides are gearing up for a fight, and my concern is that those who are making inroads for limited government, budget cuts, and decreased taxes will run up against an angry power base that sees their influence and authority eroding at a pace they are unable to stop.  My biggest fear is that our freedom and ability to self-rule will evaporate with the civility.  We must put our liberty and the principles of the Republic ahead of Party lines and political loyalties.  The state of our Union depends upon it.

1 Timothy 6:3-5      "If anyone teaches otherwise and does not agree to the sound instruction of our Lord Jesus Christ and to godly teaching, they are conceited and understand nothing. They have an unhealthy interest in controversies and quarrels about words that result in envy, strife, malicious talk, evil suspicions and constant friction between people of corrupt mind, who have been robbed of the truth and who think that godliness is a means to financial gain."
Posted by Pam Kohler at 7:00 AM