This blog post comes to you courtesy of vigilantcitizen.com, and my Sunday School class.  I actually became aware of this latest "technology" when our class leader showed us the video from the University of Illinois, where this research has been on-going.  I then followed up with my own research and found lots of articles that backed up this information.  What am I talking about?  A hair-thin electronic patch that adheres to the skin like a temporary tattoo.  It's official name is Epidermal Electronic System (EES), and was developed by an international team of researchers from the U.S., China and Singapore. 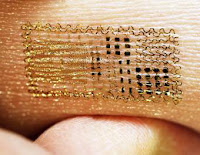 According to the designers, EES will be beneficial for health monitoring and will, of course, (wink, wink) be innocuous and benign in its use.  “Our goal was to develop an electronic technology that could integrate with the skin in a way that is mechanically and physiologically invisible to the user.....It's as soft as the human skin." They also cite the possible uses in patients with sleep apnea, babies who need neonatal care and for making electronic bandages to help skin heal from wounds and burns.  Sounds good on the surface, right?
What about the possibility of more sinister applications?  Say, like tracking, spying on, and monitoring people?  And the fact that it is being promoted as a tattoo makes it that much more inviting to our impressionable youth.  I can hear the Internet Generation now ..... "It's so cool; it's progress, Mom; they're just trying to keep us safe."  And it doesn't help that Facebook is crawling with videos of youngsters receiving these innocent tattoos.  I urge you to watch this short video where the developers give their spin on this invention, and see the cute little tattoo embedded within the University of Illinois mascot.  It is chilling!
While I am obviously concerned about the privacy issues in this technology, I am much more troubled by the Biblical implications.  I cannot imagine that there is anyone on the face of the earth that has not heard of the Mark of the Beast.  Just in case you haven't, let me enlighten you....


Revelation 13:16  "He has forced everyone, small and great,
rich and poor, free and slave, to receive a mark
on his right hand or on his forehead..."

For those of you who don't understand the significance of this passage, it refers to a monetary system in the End Times, whereby no one will be able to buy or sell anything without this mark.  You won't need money to buy food, medicine, or basic instruments of survival.  Just the Mark.  No Mark; no food.  It's simple, right? 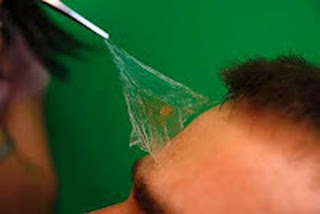 So why am I referring to the Bible about this seemingly harmless, and potentially beneficial new technology?  Here is a quote from the developers, "While some areas of the body are ill-suited to adhesive electronics, such as the elbow, most regions commonly targeted for medical studies are ideal, including the forehead, extremities and chest."
Think about it.  You wouldn't need a passport, or a credit card, or even a bank account.  We would be a cashless society.  Everything is controlled through this microchip.  EVERYTHING and EVERYBODY!  Now do you see the connection to the Bible?
What is even scarier to me is that there is actually a website that is specifically devoted to RFID chip improvements and news updates.  It's called the RFID Journal, and it reported that as of February 2012,  hospitals across the US are being used as testing labs for WIFI chip improvements.  Hospitals can now trace when employees wash their hands; all thanks to the innovations in the RFID market.  Start with practical implementation and move towards the end result .... control.
So while the loss of our civil liberties for the sake of "Security" is problematic for me, the loss of my (and your) eternal salvation is at stake.  There will be millions who will willingly fall for the marketing and propaganda.  I plead with you to see what is coming and to be ready to make your stand.
There is no need to add an additional Scripture to the end of this post.  Revelation 13:16 says it all.  I urge you to read the rest of the story to find out what happens to those who take this "tattoo."
Posted by Pam Kohler at 7:00 AM