Saturday Morning Commentary: What Is Wrong With This Picture?

This past week, two separate incidents in Texas schools show us just how upside down our values have become.  Diane Tran, a 17-year-old honor student from Willis High School in Texas was sent to jail for missing class.  I know there are truancy laws that must be obeyed, and in Texas, students are allowed only 10 unexcused absences within a six-month period.  Any absences in excess of that are punishable by law.  And apparently, the Judge felt persuaded to uphold the law, after having warned Miss Tran in the past. 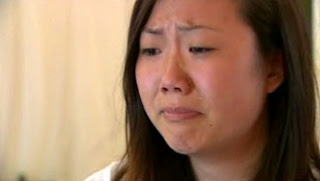 OK, so laws are there for a reason, and students must be convinced in a manner that will resonate with them.  And perhaps the 24-hour jail sentence, plus the $100 fine, doesn't seem too harsh.  But there's more to this story .... Diane's parents separated, and her mother left the home.  Her father is also an absentee parent, and Diane has been supporting her siblings on her own.  She works full-time at a dry cleaners, plus has a second part-time job at a wedding planning venue --- all while maintaining a straight A average, and taking advanced placement and college-level classes.
Both her weekend boss and a fellow student testified that "All Diane does is work and go to school"; "She goes from job to job, and from school she stays up ’til 7 o’clock in the morning."  And she still finds time to study!  Apparently, her late night hours hitting the books have resulted in one too many episodes of over-sleeping.   The Judge is aware of Tran’s situation, but admitted he wants to make an example of Diane, so that no one can be exempt from the law.  His comment?  “If you let one (truant student) run loose, what are you gonna’ do with the rest of ‘em? Let them go, too?”  Judge .....  REALLY?  I wouldn't say working two jobs and studying until daylight is exactly "running loose." 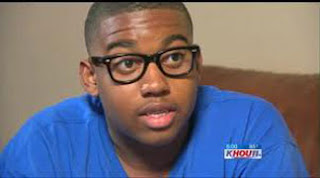 Then there is the incident involving Ray Jones, another high school student from the same area of Texas as Diane. It seems that young Mr. Jones decided to jog to school one day, and was so exhausted from his run, that he just couldn't make himself stand up for the nine seconds it takes to say the Pledge of Allegiance.  After his teacher asked him to stand, and he refused, he was told to leave the classroom.  That, in Mr. Jones' view is harrassment.   According to his mother, “He was tired, dripping with sweat, exhausted.  He just, on that particular day, did not feel like standing up.”
But here's the thing .... According to officials at the School District, while students are not required to participate in the Pledge of Allegiance, they are still expected to stand, unless a parent has contacted the school regarding this practice being in conflict with their religious beliefs.  Ray's mother admits she never wrote such a note; and it's not a religious issue for them.  Ray just didn't "feel like it".
And now Ray has made a public accusation that the teachers are punishing him for being unpatriotic; and making him "feel uncomfortable".  His mother thinks the teachers should have asked him what was wrong, and found out why he was too tired to stand.
So obviously, my question is, shouldn't the reasons Miss Tran is too tired to make it to class on time be just as important?  I'm sorry --- I have to confess a bias in the reporting of these two stories.  I am sick and tired of excuses made for those who don't appreciate what this country is all about!  Maybe Ray Jones was wiped out from his morning run; maybe his conduct was uncharacteristic for him.  But that is no excuse for not obeying the teacher, let alone honoring the flag and the country that gives him the right to display such disrespectful behavior.  In my personal opinion, his refusal to stand for the Pledge is an insult to all the brave people that have fought and died to keep him safe and protect his freedom of speech (or in this case, protect his right to show such a blatant lack of respect).  I'm sure some ACLU lawyer will soon be on his doorstep, claiming his "rights" have been violated, and he is owed a public apology.
While on the other hand, it is also my own viewpoint that Miss Tran should be celebrated and congratulated on her perseverance and determination to achieve the American dream.  She obviously knows and values the opportunities that are available to anyone who is willing to work hard.  Working two jobs shows me that she isn't expecting a government hand-out to go to college.  And I'm sure that in spite of her lack of sleep, she had no problem standing for the Pledge of Allegiance.
I have no way of knowing what the future plans of each of these young Americans might be.  But  I can tell you on which one I am willing to put my hope for our future.  It has nothing to do with sex, race, or whether they've been treated fairly.  It has to do with which one is willing to be a "stand up" kind of citizen.