Maybe I'm an anomaly.  But as my senses are becoming more and more attuned to "something evil this way comes", I want to read everything I can to help me gain the proper mindset and skills to traverse the minefield.  There are a myriad of "How To" books and while you can glean much information from them, they start to become repetitive.
For me, I love the novels that allow my imagination to see just what I will be facing.  Do they scare me?  Of course!  But most of these books are written by men with military and government experience; so while fictional, their books speak of real experiences and real solutions.  I'd rather face the monster than pretend he doesn't exist. 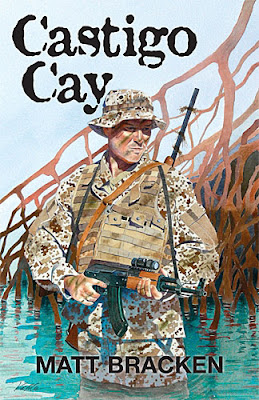 That's why Matthew Bracken's latest novel, Castigo Cay, is such a winner.  And I'm assuming you are familiar with his trilogy, beginning with Enemies Foreign and Domestic.  In this new series, Bracken introduces us to Dan Kilmer, a former Marine Corps scout-sniper who is a veteran of Iraq and Afghanistan.  America's status as a global superpower has seriously slipped, the national economy is deteriorating, which has resulted in the decline and death of the dollar.  Hyperinflation rules the day; there are riots in the street, runs on the banks and Big Brother is eroding any real freedom left.
Our protagonist decides to skip all the chaos of the Greater Depression by taking to the open seas aboard his sixty-foot steel schooner, Rebel Yell.  He has become a reluctant ex-patriot, unable to return to his home country because all his assets (which are tied up in his boat) will be seized for back taxes, fines, and other penalties imposed by the increasingly tyrannical government.
Unlike post-Collapse books, Castigo Cay takes place while America is still a shadow of her former self.  It is not apocalyptic; it gives us a realistic view of how we will look as we slide into a gradual decay of reduced freedoms and non-existent privacy. Cameras are on every corner, recording our every move. So Dan Kilmer creates an unconventional life, off the radar of an overt police state back home.  He sails the ocean blue, scamming his way around the Caribbean, living off his ingenuity and his skills.
Of course, you wouldn't have a story if all Dan did was sail from port to port, so without spoiling the novel, let me just say that the plot involves beautiful women, sneaking back into the USA, and thwarting the despotic government authorities and the local thugs and strongmen; who rise in a natural power struggle.
What I like about Bracken's books is the fact that they are so realistic.  Because he is a former Navy Seal and an avid ocean sailor, his character performs sensible and reasonable maneuvers.  His weaponry is accurate and true.  The action scenes are written convincingly and authentically.  You believe the story could happen tomorrow!  And when a character parachutes at night, or slogs through a lagoon with a scoped bolt-action rifle slung over his back, and an AK-47 slung across his chest, you know Bracken is writing about something he knows.
This book helped me to think outside the box.  The scenario is visible on our horizon, and helped me to plot how I would handle each situation.  And even more exciting, Dan Kilmer's vocation as an ocean-crossing skipper allows future novels to take on new subject matter and issues.  Expect to see Dan navigate a wide variety of political systems, economical situations, and cultural and power structures.  With the way our world is crumbling, Matthew Bracken and his alter-ego Dan Kilmer will have no trouble getting involved in more scrapes and adventures.  I look forward to seeing how they steers us through the treacherous waters.

1 Chronicles 19:13      "Be strong, and let us fight bravely for our people and the cities of our God. The LORD will do what is good in his sight."