"We Don't Know Who We Are Anymore" 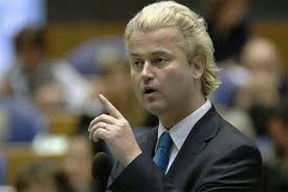 That was a compelling statement made by controversial Dutch politician Geert Wilders.  And it dovetails with my post, earlier this week, on the French and Greek elections.  But it's real significance is that we, as Americans, should pay attention to what has led him to make such an adamant declaration.  As I said, he is not without legitimate critics.  Due to his high-profile rhetorical war with radical Islam, this leader of the Freedom Party in the Netherlands now has to live in a government safe house fitted with a panic room and guarded round the clock.  But it is not these views that I want to focus on.
Wilders rose from relative obscurity over the past 10 years to become one of the most influential politicians in Europe.  His rise in the Parliament of the Netherlands comes in the midst of a debt crisis, and where painful recessions, soaring unemployment and rising apathy among youths are fueling strong emotions; something I think most Americans can identify with.  These issues are now at the forefront of a strong movement in Europe, led by anti-immigrant nationalists.
For more than a generation, European political elites have sought to fuse the region by adopting the euro and a series of treaties that virtually erased national borders across a vast swath of the continent. National sovereignty was a thing of the past.  But in the recent surge of the nationalist far right, and to a lesser extent the far left, European leaders are confronting not only a backlash to a united Europe but also a troubling new hurdle in their efforts to resolve the 2 1/2-year-old debt crisis.
Now the pendulum is swinging back the other way.  From France to Austria and Greece to Finland, the popularity of nationalists is growing as politicians such as Wilders tap into voter rage over both the crisis and the proposed cure being pushed by mighty Germany: severe rounds of government cutbacks and difficult economic overhauls to restore investor confidence in Europe’s governments.
What does this mean?  It means that the attempt to build a "collective" out of the nations of Europe is failing.  The member nations of the European Union are mandated to help the countries that have been wasteful and who indulged in excessive entitlement programs.  For example, citizens in Germany and the Netherlands are expected to pay higher taxes and undergo severe austerity cutbacks in order to save the economies of profligate nations such as Greece.  And the people are fed up! 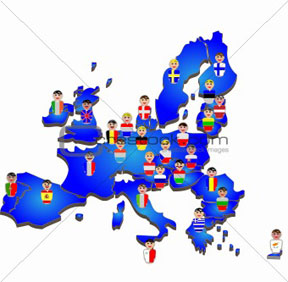 The open-borders treaties are no longer popular.  Dutch citizens want to maintain their unique characteristics; they want to engage in commerce using guilders, not euros.  And they are not the only nation seeking to retain their individuality and distinctiveness.  Citizens across Europe have seen European integration eat away at living standards, traditions, and national identities.
Upcoming elections in France are centered around issues such as the withdrawal from the Euro Zone and bucking the German-led austerity drive.  Austria's far-right Freedom Party and Finland's nationalist True Finns party have both seen an upsurge in popularity.
While Socialism in Europe is coming under attack, a hard swing towards nationalism may not be the answer either.  Read this week's post on the elections in France and Greece, and you can see the dangerous trend toward ultra-nationalism and the flirtations with Neo-Nazism and Communism.
Time will tell if politicians like Geert Wilders rule the day; and if their policies help or increase the simmering biases among citizens.  Immigration is not a bad thing; our own nation is powerful proof.  We are a nation established by immigrants.  When managed fairly and without prejudice, we welcome the hard-working, the brilliant, the freedom-loving.
That being said, I believe we are flirting with disaster with our own "open borders" policies.  Americans are not Canadians, who are not Mexicans.  We can live side by side, keeping our sovereignty and our autonomy.
I can understand why the individual nations of Europe are tired of the "One World Government" model.  They were not made to become one homogenous people;  each nation has something distinctive and unique to offer.   The trend over the last 20 years towards obscuring borders and nationhood in favor of "global citizenship" is not working.
In our own country, we are being assaulted by Agenda 21.  This United Nations proposition promotes, among other things, virtual elimination of private ownership of land; government control of fisheries and farm harvests; government control of the size of your family.  It is, in essence, a globalist attempt to impose UN environmental regulations aimed at controlling our local cities and towns through the International Council for Local Environmental Initiatives (ICLEI).
What we see happening in Europe could easily occur in the US.  The collapse of the dollar would lead to a "global" currency, and Agenda 21 would ensure we lose our sovereignty.  But we must be careful not to swing sharply to the other extreme.  Yes, we are Americans, but we have a long history of welcoming law-abiding immigrants who are willing to assimilate, while bringing the best of their heritage with them.   We must watch Europe; learn from their mistakes and avoid the perils and hazards that have brought them to this precipitous point in time.  We, too, are on the verge of taking some big steps in a different direction..... is this really where we want to go?

2 Peter 3:17    "Therefore, dear friends, since you have been forewarned, be on your guard so that you may not be carried away by the error of the lawless and fall from your secure position."
Posted by Pam Kohler at 7:00 AM