Ok, I know this is probably going to be a controversial post.  And first and foremost, I want everyone to understand that what I'm about to say is not intended to criticize or offend anyone.  It is simply an observation from my personal experiences.  So, here goes....
As a member of Gun Culture 2.0 (those who did not grow up around guns, but came to it from a self-defense position), I have approached gun ownership from a completely different perspective than a lot of my husband's generation.  Gun Culture 1.0 had shotguns and rifles in their hands before they entered first grade.  Hunting is second nature to them, and they are certain the Second Amendment is their God-given right.
They are all good shots and gun safety is intuitive and instinctive to them.  I, on the other hand, am new to the handling of guns, and I came to gun ownership through a desire to be able to competently defend myself.  Therefore, my instruction came at the hands of professional trainers, who not only taught me how to hit my target, but instructed me on gun safety and how to regard my right to carry a weapon.
That's where some of the members of 1.0 and 2.0 part ways.  I have grown to enjoy listening to "Gun Talk", a radio program hosted by Tom Gresham.  I have been amazed at the number of 1.0 members that think we should recreate the Alamo in pushing Second Amendment rights.  They don't care what public opinion is in regards to gun ownership.... "We have the Second Amendment and they can't take that away from us." 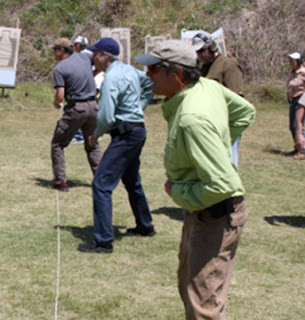 But I would like to put forth another argument.  I think we better care about what the public thinks, because that same public can vote and start chipping away at that Second Amendment right!  No matter what anybody tries to say, the issue of gun ownership is being tried in the court of public opinion. Namely, I can foresee Concealed Carry becoming our opponent's first rallying cry.
Consider this:  our political power as gun owners owes a lot to 2.0 members.  The more people who have CCLs and get the proper training, the harder it will be to take that right away.  These millions of CCL holders are building a wall between the Government and the Second Amendment.  Every CCL permit is another brick in that wall which protects the Second Amendment.
But when shooters like George Zimmerman make the decisions they do, it taints us all.   Yes, he had the requisite permit to carry a gun, but I think it's fair to say he had not received the proper training in regards to the use of that weapon.  Just having a permit to carry doesn't mean you know how to approach a given situation.  (We are taught in training, never to go looking for trouble.  Obviously, that wasn't a consideration for Zimmerman).
I believe in the right to carry concealed -- that's why I got my permit.  But I was uncomfortable with handling a gun and sought proper training.  Because of that training, I have learned how to react in different situations and when it is acceptable to pull your weapon.  I have been taught a self-defense mindset that is completely different from a gun owner with an untrained perspective.
Yes, the right to carry arms is guaranteed in the Constitution, but remember.... Amendments can be eroded and even repealed.  And if you get enough voters to influence the right politicians, it is not unreasonable to expect that this most sacred of amendments can become a thing of the past.
When we push the issue, and try to create a "Rosa Parks" moment, and declare "We ain't backing down!", then I'm afraid we alienate those who can vote our right away.
Am I passionate about preserving this right?  You bet I am!  But am I seeing a difference in attitude between the professionally trained gun owners of Culture 2.0, and some of the "born and bred" owners of Culture 1.0?  Absolutely!  We need to come together in our approach and play this smart.  We need each other!
But don't take it from me.... read Michael Bane, Tom Gresham, Masayoob, Tiger McKee.  They'll tell you that without training, you don't even know what you don't know.  My own husband, Peace-Loving Warrior, is an excellent example of Gun Culture 1.0.  He grew up hunting and shooting competitively, and will be the first to admit that his gun training was the best thing he ever did!  Until we can get Gun Culture 1.0 to see the difference between marksmanship and real gun training, I think we will continue to have ongoing Zimmerman-type problems.  And his "in your face" position and strategy doesn't result in the gun ownership protections we both seek.

Romans 14:19     "Let us therefore make every effort to do what leads to peace and to mutual edification."
Posted by Pam Kohler at 7:00 AM