Who Is Ragnar Benson?

Let's say for the sake of discussion that you are in a car that's gone completely off the cliff and you've landed squarely in Crazy Town.  If that describes you, and you're looking for some cool, "out there" skills, may I suggest you do some research on Ragnar Benson and Paladin Press.  He's a particular favorite of my husband, the Peace-Loving Warrior, and I can almost guarantee that you and your husband will find his writings intriguing, to say the least.
According to Wikipedia, Ragnar Benson is the pen name of a prolific survivalist author who specializes in preparedness topics, particularly survival retreats, hunting, trapping, austere medicine, explosives, firearms and improvised weapons.  As you can tell by the topics he favors, he and his publications are construed as controversial, and some of his books have been banned from importation into Canada. 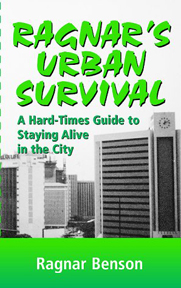 No one knows very much about his background or personal life.  His real name has not been revealed publicly.  He is apparently the son of a German immigrant and in his book Urban Survival he recounts some of his father's experiences growing up in Germany after World War I.  As of 1999, he supposedly lived ".... on nine acres in southern Idaho with his pet skunks and his wife and 100-plus guns of varying calibre."  Can you see why he would drive the Elites crazy?
His travels have taken him to Rhodesia, Southeast Asia, as well as some type of military stint at Fort Benning, Georgia.  On a radio show in 2010, Benson mentioned that he had traveled to more than 90 countries.   He has also been a private investigator for 25 years.
You can tell when your read his books that Ragnar knows his stuff---- you're just not sure where he learned his stuff, or in what capacity.  PLW's favorite book was Survivalist Medicine Chest, and he has loved the opportunity to vicariously experience all of Ragnar's adventures.  Survival Poaching was not so much a favorite because of the poaching aspect of the book, but for the many interesting ways to secure game animals for food. 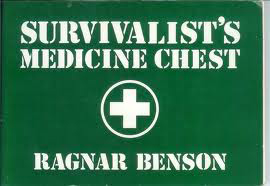 Ragnar's books cover politics to weapons to survival.  Urban Survival is an interesting read, debunking the myth that one needs to "bug out" to a mountain retreat to survive a SHTF scenario.  Although you definitely need a whole different set of survival skills to make it in the city, it can be done , and Ragnar tells you how to find water, trap and butcher game, preserve food, position a retreat for maximum safety and how to barter with other survivors.
Live off the Land in the City and Country is written specifically for survivalists and retreaters, and reveals a totally practical survival program.  Ragnar even offers old Indian secrets and advice on survival medicine, firearms, preserving food and diesel generation.  His topics are relevant and timely.
I have to warn you, Ragnar's survival world is a scary place, but the knowledge he imparts is so valuable.  His books should be a part of any Prepper or Survivalist's library.
So now that you've been introduced to Ragnar Benson, it's safe to steer your car away from Crazy Town.  Just be ready to make a detour if you see a sign for the Highway to Hell ..... Ragnar's probably been there, too, and can give you directions to a safe haven.