Increasingly, we are hearing stories that our returning combat veterans are suffering Post Traumatic Stress Disorder (PTSD).  Whether it is the recent killings of 16 men, women and children in Afghanistan by a soldier (as yet unidentified and allegedly suffering from a brain injury - the story changes daily), or the murder of a Mount Rainer Park Ranger by an Iraq War veteran, PTSD is the "disorder" that our veterans are being saddled with.
PTSD is real; it exists.  And why would it not?  When our brave men and women see multiple deployments while fighting alongside U.S.-trained Afghanis or Iraqis that oftentimes turn out to be the enemy?  How do you switch that strain and pressure and worry off, let alone the fatigue of war and the financial concerns of your family back home? 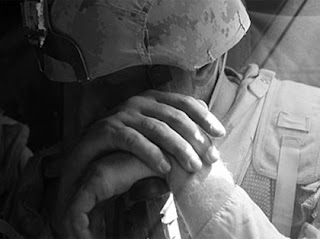 Yet we must be very careful to scrutinize the news we receive from the media.  The mainstream media would have us believe that Benjamin Colton Barnes, the suspect in the death of the Park Ranger, was an angry veteran who suffered from PTSD, and therefore all war vets are suspect and subject to being painted with the same brush.  After a little digging, I found a news report by MyNorthwest.com and a statement from the local Pierce County Sheriff's Office on this young man:  "He seems to be kind of a jerk more than anything else before he even went into the military....There's zero percent chance this is PTSD.....He was a trouble maker from the get go and the military did the right thing by getting rid of him."  Yet he is labeled with this very real problem, which in many ways minimizes those who are truly suffering.
And in the recent case of the deaths of Afghan citizens, we have very little facts to go on.  Yet PTSD is already emerging as the likely cause of the rampage.  Will we ever know the real facts?  My fear is that PTSD will become the scapegoat for any and all atypical or deviant behavior, while our brave veterans who truly suffer from this disorder will be denied the real help they deserve.
Sally Satel, an American Enterprise Institute (supposedly a conservative think tank) scholar and psychiatrist, has for years proclaimed that care for PTSD veterans is a waste of money.  Among her key points:  1)  She objects to the $7.2 billion allocation in the 2012 budget for research and treatment of PTSD in military veterans, feeling that mental health examiners are misdiagnosing the disorder, and paying for undeserved benefits.  But what about those who truly deserve the assistance?  (In a side note:  the very diagnosis of PTSD is changing.  Is this an attempt to minimize coverage under existing military benefits?)  2)  She also believes that disability benefits incentivize unemployment and dependency, and discourage veterans from returning to the civilian workforce.  So is she trying to say our veterans are just seeking another form of welfare?  That's a pretty broad generalization, don't you think?
But all you have to do is google "PTSD" and see the hundreds of websites that are evidence that this disorder is very real and very troubling to our veterans and their families.  I have personally sat across from a brave and honorable young man, a soldier home on leave, whose heart and mind were understandably torn between the buddies he left behind, and his young family who he felt temporarily estranged from.   He talked of nothing but the life-and-death camaraderie with his fellow soldiers and the difficult circumstances they find themselves in.  Who do they trust when children are often used by the enemy to kill his fellow soldiers?  I looked deep in his eyes and could see that he worried about being away from men with whom he shared a daily struggle to survive.   Meanwhile his wife was managing all the household duties without him, and his very young children needed time to become reacquainted with him.  What do you think that does to a man's identity?
Within a few days time, he had re-bonded with his family..... loving pictures of smiles and hugs were evidence that his connection with his wife and children was secure ..... just in time to be sent back to the front lines in Afghanistan. 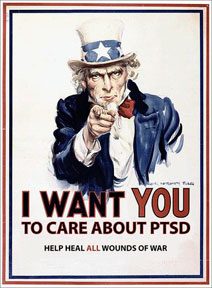 Here's my concern:  this generation of brave Americans are being sacrificed, and for what?  Are we any further towards reaching our goal of eradicating terror across the globe?  Not only do we have an entire generation that bears the obvious scars of missing limbs, but there is an untold number who carry an invisible injury that may be even more difficult to diagnose and treat; especially if they become a casualty of government cuts and indifference.
I am not making this about politics--it's about our men and women who deserve the very best care they can get.  I do not want them labeled and discriminated against; I do not want them to be shoved under the rug.  They and their families have sacrificed so much for us and they are entitled to whatever they need.  Let's stay vigilant and encourage our elected officials to make them a priority!

Psalm 8:4     "What is mankind that you are mindful of them, human beings that you care for them?"
Posted by Pam Kohler at 7:00 AM